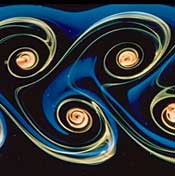 The Fluid Dynamics Prize was established in 1979 with support from the Office of Naval Research to recognize and encourage outstanding achievement in fluid dynamics research.

The prize is given annually and consists of $10,000, an allowance for travel to the meeting at which the prize is awarded, and a certificate citing the contributions made by the recipient.

See more information about the prize and its recipients.