From the outset the AIP published journals on behalf of its Member Societies, for example, the Physical Review for the American Physical Society. It also acquired or developed scientific journals of its own in fields where no single society had a mandate, notably the regions between disciplines and between applied and academic physics. Almost from its foundation, AIP published the Review of Scientific Instruments, Journal of Applied Physics, and Journal of Chemical Physics. Starting in the late 1950s it added a number of others. 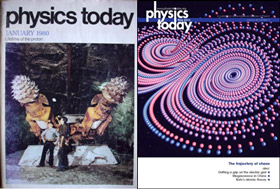 Its most widely read publication, the broad-interest, unifying magazine Physics Today, was inaugurated in 1948. Physics Today is distributed as a membership benefit to all individual members of the ten Member Societies and the Society of Physics Students.

In 1955 AIP began to publish English-language translations of Russian-language physics journals, and much of this continued through 2005. The AIP Conference Proceedings Series began publication in 1970, with more than 1600 volumes published to date. In 1995, AIP started a new magazine, The Industrial Physicist, which was published for 10 years. An early pioneer in online STM journal publishing, AIP’s first electronic online journal in physics, Applied Physics Letters appeared online in 1995.

All AIP journals were made available to subscribers online in 1997. From 2000-2012, AIP jointly with the American Physical Society published a series of Virtual Journals, online collections of papers from a broad range of journals in the physical sciences.

A book program was initiated in 1984 and renamed AIP Press in 1993; books ranged from specialized monographs to handbooks and general interest works. Starting in 1997, AIP Press books have been published and distributed by Springer-Verlag (now Springer Science + Business Media).

To meet the demand for increased access and adjust for associated shifts in business models, AIP began several initiatives to complement its subscription-based journal offerings, including article rental (2010) and options for authors to pay publication costs up front thereby making the article open access upon publication. The Institute introduced its first open access journal, AIP Advances in 2011, followed by APL Materials in 2013.

In 2013, the AIP Governing Board chose to form a wholly-owned subsidiary, AIP Publishing LLC, to carry out AIP’s publishing mission and to set a track for future growth.

As of 2018, AIP Publishing’s portfolio consists of 28 peer-reviewed journals from AIP Publishing and seven publishing partners, including five gold open access titles. The journals cover the breadth of the physical sciences, and are highly ranked in terms of citations.  The Scitation.org publishing platform hosts almost a million articles and over 1,800 volumes of conference proceedings, and includes an historical archive of research dating back to 1930.