Ideal work space can mean many different things to different people, but most want the same things from their work environment: to feel productive, comfortable, and inspired. Creating a space that could yield such satisfaction is no small task, but that’s exactly what AIP Publishing set out to do with its new offices.

In June of 2012, with its Melville location lease due to expire in two years’ time, AIP sought to make the most of the opportunity to refit its publishing operations in an optimal setting. First, management took note that many of its dedicated staff members had roots on Long Island and that a significant move would be disruptive. It was therefore decided to concentrate the search on a new or renovated facility in Melville or the surrounding area. We also decided early on to involve staff in the design, to help co-create a new work environment that best suited us and our vision for the organization.

Strategically, there were several circumstances to consider. AIP’s publishing operations had changed a great deal since it moved into its 2 Huntington Quadrangle facility in 1999. With the changing landscape of scholarly publishing, AIP had adapted—and dramatically so—from a publishing services/production house to a publisher focusing on AIP and Member Society partner publications. AIP Publishing’s space would need to embody collaboration to better serve a diverse audience of authors, researchers, and librarians. It would also need to foster creativity in order to grow its impact in the global research community. 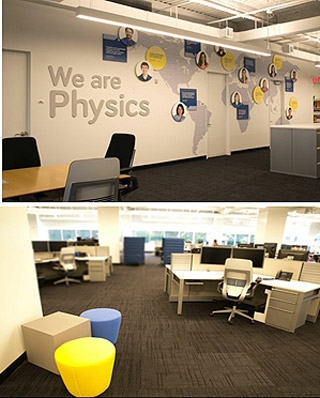 I worked with Richard Baccante, then chief financial officer of AIP, on the initial project management team. When the project intensified, Wendy Marriott, head of IT Operations, was tapped for a leadership role, as was Roy Levenson, AIP Publishing’s newly hired chief financial officer. We asked three architectural firms to review our requirements and present conceptual plans for the new work space, and decided to hire TPG Architecture (The Phillips Group). We then set about interviewing all of the work group leaders and many of the staff about their working style and criteria for an ideal work space.

Once we settled on a conceptual design, Bob Rosenbluth of Real Estate Strategies helped find a number of potential sites. We selected what we considered an optimal location—1305 Walt Whitman Road—in spring 2013, and the detailed design phase began. The lead designer, Stacy Emanuel, spent many months with our staff and the building owner and contractor, RXR Realty, to fully integrate our shared vision.

Perhaps the best descriptors of the new space are “open” and “collaborative.” AIP Publishing’s new headquarters is designed to be open for everyone, from the officers to our newest staff member. Three- to six-person pods replace the typical offices and cubicles. There are also two- to three-person huddle rooms and plenty of private work areas and informal space for staff to use when needed, along with a variety of conference rooms.

An important and necessary complement to the physical space was the investment in technology to fuel productivity and collaboration. All staff have been equipped with new personal laptops/tablets that can be moved from a person’s desk to any conference room (all with wireless connectivity) and are accessible to any printer or projector. Every work station has dual monitors to increase efficiency. Because everyone uses the same devices, communications and technical support are streamlined.

Another big technology change was cloud sourcing AIP Publishing’s primary data center, reducing the capital investment. The infrastructure needed to run the data center—air conditioning, battery back-up generators, servers, and network equipment—is now the responsibility of the cloud provider. The disaster recovery plan has changed as a result, with emphasis shifting from the physical integrity of the system to maintaining data at a back-up alternate location in case the cloud or provider were to fail. AIP Publishing is also moving toward cloud technology for its software applications. The staff has started using elements of Microsoft Office 365, including One Drive, a cloud storage service that syncs file versions from all user devices so that staff always have full access to the files they need, whether in the office or on the road.

Leading up to the big move in mid-May, staff received training in operating in an open work environment, as well as how to use the new technology. They were also presented with the challenge of going nearly paperless. Each staff member was given two bins for the move; only essential material that could not be digitized was moved to the new offices.

With this extensive prep work, the physical move was accomplished very quickly. The office at 2 Huntington Quadrangle closed on Thursday evening, May 15, and most employees worked from home on the 16th. A dozen or so staff worked through the weekend to have the new office ready for business the following week. On Monday, May 19, employees entered their new headquarters. The seamless move was the culmination of a concentrated collaboration, in which everyone had a stake and in which everyone benefitted. Staff reaction has been wholly positive.

We had a formal celebration on August 20, an open house for AIP Publishing’s Board of Managers, our architects, landlord, and staff. We were pleased to learn that the office design had been entered into a contest held by the Long Island chapter of the American Institute of Architects for the 50th Annual Archi Awards. We wish TPG well in this venture for recognition. For AIP Publishing employees, we already know we are working in a winning environment. 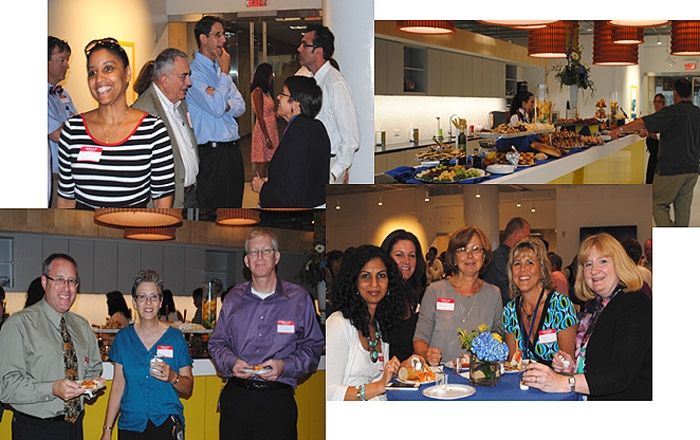