A profile in American Innovation 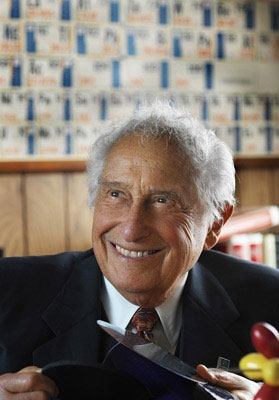 Stanford Ovshinsky was an American scientist who approached invention with intuition and drive. He founded Energy Conversion Devices, an AIP Corporate Associate, in the 1960s and developed innovative new products that have spurred entirely new industries.

The AIP community learned more about Ovshinsky, his life, work, and impact at its most recent Lyne Starling Trimble Science Heritage Lecture, given by Dr. Lillian Hoddeson, a well-known historian in the physical sciences.

Hoddeson spoke movingly of the enthusiastically unconventional scientist and entrepreneur Stanford Ovshinsky, whose biography she is currently writing. Ovshinsky was important in establishing the investigation of amorphous and disordered materials, but he was not bound by disciplinary identification. Hoddeson quoted Richard Zallen (professor emeritus of physics, Virginia Tech) as saying: “What Stan does is not science. It’s more interesting than science.”

Hoddeson described Ovshinsky’s intuitive and visual approach, his willingness to forge ahead with trials and experiments based on his visualizations and pattern recognition, and his occasional dismissal of the lack of a theory. He and his associates took the amorphous and disordered materials he had created and sought to invent technologies using them. Over decades they developed nickel metal hydride batteries, thin-film solar panels, the Ovitron (the first amorphous switch) and then the threshold switch, and phase-change memory.

Hoddeson traced Ovshinsky’s unorthodox methods to his upbringing. He was born in Akron, OH, in 1922, where his mother and father had settled after emigrating from Lithuania and Belarus. His father collected scrap metal from factories, and Stan’s first jobs in his teens were as a tool maker and machinist. His ideas came from materials and processes. He was always at home in industrial settings.

During World War II, Ovshinsky conceived of his first successful invention, a high-speed, center-drive lathe, while working in tool shops for the rubber industry. He established his first company, a machine shop, to develop this lathe, patent it, and sell it. In the 1950s, he directed research for the Hupp Motor Company and broadened his interests to include machine intelligence and cybernetics. He and his brother founded another company, General Automation, with this general interest, which they combined with new techniques to produce an amorphous, thin-film switch, the Ovitron.

In 1960, Ovshinsky—a serial entrepreneur—started the company Energy Conversion Laboratory (ECL) with the goal of solving an energy crisis that would not be generally recognized until a decade later. The working-class Jewish immigrant community in his Akron years had instilled in him a dedication to solving social problems. He always saw his work in science and invention as aimed at solving problems important to society. ECL developed electronic memory, new batteries, solar cells, and more. Devices in our pockets and on our desktops owe their existence in part to this pioneering work. 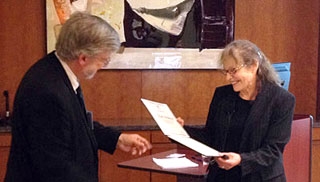 Hoddeson also spoke to a smaller group of strong supporters of AIP’s History Programs at a reception graciously hosted by Nancy Greenspan at her home. Hoddeson reflected back to her first contacts with Charles Weiner, who directed the Center for History of Physics and Niels Bohr Library in New York City. She worked closely with Spencer Weart, who became director of these programs in 1975.

She wrote much of her dissertation and first book in the library at AIP. She already had a PhD in physics, but, she said, Spencer taught the physicist how to be a historian. Dr. Hoddeson worked on several of AIP’s groundbreaking projects and wrote or co-wrote The Birth of Particle Physics (1983), True Genius: The Life and Science of John Bardeen (2002), and several other respected works. Her latest book, which she wrote with Michael Riordan and Adrienne Kolb, will be released this fall: Tunnel Visions: The Rise and Fall of the Superconducting Super Collider. Hoddeson was awarded the 2012 Abraham Pais Prize “for her leadership and contributions to writing the history of twentieth-century physics, her pioneering studies of American research labs—particularly Bell Labs, Los Alamos, and Fermilab—and her perceptive biography of John Bardeen.”