The Role of Space Exploration in Cold War Diplomacy

In late July 1969, the Apollo 11 crew successfully landed on the Moon and returned safely back to Earth. After they splashed down in the Pacific Ocean, President Nixon greeted them on the USS Hornet aircraft carrier and asked them to act as his representatives on a goodwill tour that took them to nearly 30 cities around the world in just under two months. When they returned from their trip, Nixon thanked them for acting as his ambassadors and according to Neil Armstrong, told the crew that “He had been trying for years to get a meeting with Romanian President Nicolae Ceauşescu, and after leaving the Hornet he was able to get an appointment. President Nixon said something to the effect, ‘That meeting alone paid for everything we spent on the space program.’”[1] The meeting Nixon was referring to laid the groundwork for normalizing relations with China, which would become one of the Nixon Administration’s major 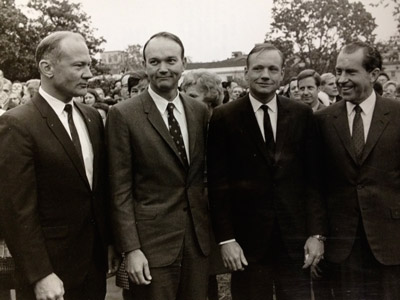 accomplishments in foreign relations. Although Nixon’s comment is clearly not a formal evaluation of Project Apollo, it does reflect the broad criteria used to assess the value of federally funded scientific and engineering programs during the Cold War.

Project Apollo was an enormous national investment. It became the largest scientific and technological program in United States history and, at the time, the greatest open-ended peacetime commitment by Congress. Sending men to the Moon cost the United States roughly $25 billion in the 1960s, more than 18 times what the country spent on the Panama Canal, over five times the expense of the Manhattan Project, and even more than the Eisenhower administration’s Interstate Highway System. This large-scale national investment highlights the political priority placed on international prestige during the Cold War, as well as the significant role that science and technology had come to play as diplomatic instruments in US foreign relations. 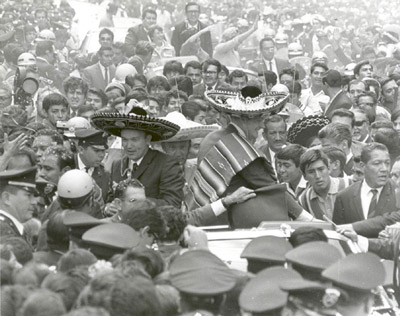 What factors should we take into account when funding and evaluating science? This question was as vital to American policymakers in the 1960s as it is today. The Cold War was a period when the “international political–psychological factors” of scientific and engineering programs were considered when allocating funding and assessing science and engineering programs. Science was viewed not only as an engine of progress, but also as a direct index of national power, which made it a key element in maintaining a strong geopolitical position during the Cold War. Project Apollo epitomizes this symbiotic relationship between science and diplomacy in this period.

Roughly a month before the first lunar landing, Nixon met with his advisors to discuss the upcoming Apollo 11 lunar landing. In that meeting he decided that he would fly to the Pacific to greet the Apollo 11 crew when they returned from the Moon, which would not only demonstrate his enthusiasm for the mission, 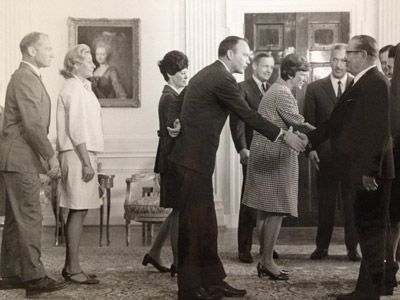 but also provide him with an opportunity to visit Romania. According to his speechwriter, “Nixon wanted an excuse to go [to Romania], and he wanted a note of triumph to set the tone for his initiative. The trip to the far Pacific was a perfect answer.”[2]  Nixon hoped to send the message through President Ceauşescu to both North Vietnam and China that the United States was ready to consider normalizing relations.

According to Nixon, a post-lunar landing diplomatic tour would also provide National Security Advisor Henry Kissinger with “the perfect camouflage” for a secret meeting with the North Vietnamese. Since Kissinger would be expected to fly to Paris to brief the French on Nixon’s tour, he could use the trip as an opportunity to meet in secret with the North Vietnamese’s chief negotiator in Paris. This would be Kissinger’s first of a series of secret meetings leading up to the Paris Peace Accords and an attempt to end US military involvement in Vietnam. 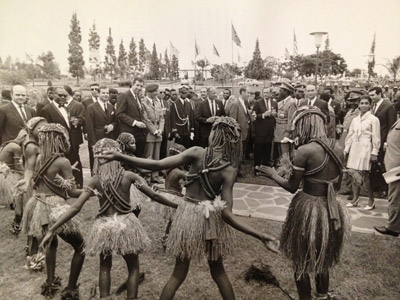 So, when the Apollo 11 crew splashed down in the Pacific on July 24, 1969, Nixon was there to greet them. Later that day he flew to Guam to begin his “Moonglow” diplomatic tour of Asia and Europe to promote “the spirit of Apollo” and present for the first time what would later come to be known as the Nixon Doctrine. Throughout the rest of his trip—which took the president to the Philippines, Indonesia, Thailand, Vietnam, India, Pakistan, Romania, and the United Kingdom—Nixon drew on space-themed rhetoric to couch larger foreign relations issues, especially the United States’ role in Vietnam.

This story exposes some of the diverse ways that policymakers and diplomats can engage with science to advance and support foreign relations objectives. Nixon’s “Moonglow” tour, as well as the subsequent Apollo 11 crew’s world tour, provided what were considered “nonpolitical” opportunities to have political discussions. By taking advantage of the soft power potential of this popular science and engineering program, the Nixon administration gained a foothold to begin the process of normalizing US relations with China, which would ultimately alter the trajectory of the Cold War.

Author’s note: This story is part of a book project that I am working on about the role of space exploration in American foreign relations during the Cold War.