Although the TEAM-UP report touches on intersectionality, we took a deeper dive in this webinar because we know that the racialized and gendered experiences of Black women in physics and astronomy can be unique from those of non-Black women and Black men.  This webinar on Belonging centers the experiences of African American women in physics and astronomy.

During this webinar, you will hear about: 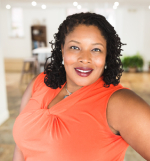 Dr. Jami Valentine, Founder of African American Women in Physics (AAWIP). Valentine earned a bachelor’s degree in physics from Florida A&M University and a master’s degree in physics from Brown University. In 2006, she became the first African American woman to earn a Ph.D. in physics from the Johns Hopkins University where she studied the physics behind magneto–electronic materials and devices. From there she joined the U.S. Patent and Trademark Office (USPTO) where she examines semiconductor patent applications for phase-change memory, nanoscale memory and spintronic devices.

She is the founder of African American Women in Physics (AAWIP), Inc., an organization dedicated to honoring the women who paved the way, inspiring future physicists and connecting with people interested in promoting diversity and inclusion in physics and other STEM fields. She enjoys spending time as a motivational STEM speaker and is the national diversity committee chair for American Mensa. 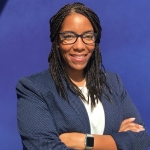 Dr. Kelly Nash, Associate Dean for Faculty Affairs & Professor of Physics, Univ. of Texas at San Antonio. Nash is a Professor of Physics and the Associate Dean for Faculty Affairs in the College of Sciences at the University of Texas at San Antonio (UTSA). Her scientific research focuses on synthesis and characterization nanomaterials and their physiochemical interaction with biological systems from the molecular to the cellular-level. The impact of her nanomaterials research stretches from fundamental biophysical studies to biomedicine, energy, and environmental applications. She was awarded the Air Force Office of Scientific Research Young Investigator Program award in 2015 for research efforts in biophysics.

Additionally, she has numerous awards for her contributions to science and promotion of inclusiveness in STEM including Dillard University Alumni 40–Under-40 award, San Antonio Business Journal 40-Under-40 Award, and UTSA President’s Distinguished Diversity Award.  She continually advocates for the involvement of underrepresented groups in science through strategic initiatives within UTSA and broader scientific community. Dr. Nash has been a proud member of Alpha Kappa Alpha Sorority, Incorporated for more than 20 years.

Jessica Harris is a physicist, informal educator, science communicator, business owner and diversity and inclusions change agent. She has formerly worked at Space Telescope Science Institute as the Education Outreach Specialist and Director of the Space Astronomy Summer Program (SASP). After her tenure at STScI, she worked at the National Radio Astronomy Observatory (NRAO) as the STEAM Education Program Development Officer and site lead for the National Astronomy Consortium (NAC).  She is currently the Program Director for the Clark Scholars Program at the University of Virginia (UVA) in Engineering School in Charlottesville. She also serves as an #VanguardSTEM Ambassador and Commissioner of the Human Rights Commission in the City of Charlottesville. She continues her engagement with NAC as an outside expert on the National Astronomy Consortium (NAC) Advisory Council.

Lastly, she is the Founder Jessica A. Harris, LLC. Jessica A. Harris, LLC is a consulting firm focused on organizational system design to advance STEM offerings and outcomes for traditionally underrepresented students in the U.S education system, K-12 & Higher Ed. She attained a B.S. in physics from Grambling State University and a M.A. in physics from Fisk University as part of the Fisk-Vanderbilt Bridge Program.