A congressionally mandated report released yesterday by the National Academies warns that severe shortages of molybdenum-99 and its radioactive decay product technetium-99m, an isotope used in medical imaging procedures, are possible after a key Canadian supplier ceases production in October 2016. 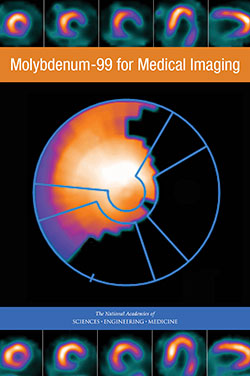 In a report released yesterday, a study committee convened by the National Academies of Sciences, Engineering, and Medicine warns that there is a greater than 50 percent chance that "severe" shortages of the medical isotopes molybdenum-99 (Mo-99) and technetium-99m (Tc-99m) will occur after a Canadian reactor halts routine production of Mo-99 this October.

Congress requested this study in the American Medical Isotopes Production Act of 2012. This legislation passed as part of the National Defense Authorization Act for Fiscal Year 2013, as reported in FYI 2013 #11.

Although international suppliers have plans to ramp up production and a few U.S.-based suppliers hope to enter the market soon, the committee raises doubts about the ability of these companies to increase production quickly enough. In the press release accompanying the report, S. James Adelstein, Professor of Medical Biophysics at Harvard Medical School and chair of the study committee, summarized these concerns: “Although there are plans from both existing international suppliers and potential domestic suppliers to fill the expected supply gap from Canada, the committee is concerned that any delays in bringing additional supplies of molybdenum-99 to the market would increase the risks of substantial shortages.”

Accordingly, the committee recommends that the U.S. government continue to work with Canada to ensure a plan is in place to restart Canadian production of Mo-99 after October 2016 if a severe shortage arises. (Between October and when the reactor is permanently shut down in March 2018, it will be on hot standby and available as a “supplier of last resort.”)

Tc-99m, a byproduct of the radioactive decay of Mo-99, is used in approximately 80 percent of all nuclear medicine procedures worldwide. Because of their short half-lives (66 hours for Mo-99 and 6 hours for Tc-99m), neither can be stockpiled to mitigate the impact of supply chain interruptions.

The committee found that about 95 percent of the global supply of Mo-99 for medical purposes is produced in seven research reactors. The Canadian reactor currently accounts for 19 percent of the globally available production capacity for Mo-99. Furthermore, all but one of these reactors are over 40 years old and thus may be susceptible to unexpected outages. Previous unanticipated outages have caused severe Mo-99 shortages in the U.S.

The U.S. market currently comprises half of the global demand for Mo-99 used for medical purposes. Despite this large consumption, the U.S. has not produced Mo-99 domestically since the late 1980s and now relies on imports from Australia, Canada, Europe, and South Africa.

(All figures drawn from Table 3.2 of the report)

A separate challenge related to Mo-99 production is that about 75 percent of the global supply currently relies on production methods using highly enriched uranium (HEU), which is considered to be “weapons-grade” and thus poses a proliferation risk.

Current and potential suppliers are taking actions to adopt methods that instead use low enriched uranium (LEU). However, the study committee concludes that progress on this front has been “uneven.” For example, the continued availability of Mo-99 produced with HEU has put companies trying to switch to LEU-based production methods at a competitive disadvantage. These companies have characterized this situation as “unsustainable.”

In the American Medical Isotopes Production Act, Congress directed the Department of Energy to establish a “technology neutral” program to support domestic production of Mo-99 using methods which do not use HEU. The National Nuclear Security Administration has since entered into cost-sharing agreements with five companies aiming to produce Mo-99 domestically without HEU. The committee concludes that three of these companies—General Atomics, NorthStar Medical Radioisotopes, and SHINE Medical Technologies—are making progress, but that it is unlikely that significant amounts of domestically-produced Mo-99 will be available before 2018.

Furthermore, the committee notes that these companies face significant “technical, financial, regulatory, and market penetration challenges.” In particular, the committee emphasizes that these companies will likely find it difficult to establish a foothold in the international market given that the increasing production by established suppliers will put downward pressure on prices.

Due to these and other concerns, the committee recommends that the U.S. government take further actions to encourage broader use of Mo-99 and Tc-99m produced without HEU.