In what one senator called an “overtime victory for science in the closing days of 2016,” the House passed the Senate’s “American Innovation and Competitiveness Act,” a bipartisan successor to the America COMPETES Acts of 2007 and 2010. President Obama is expected to sign it into law.

Many assumed that time had run out for the “American Innovation and Competitiveness Act” (AICA) to become law this year. But at the eleventh hour, the Senate was able to negotiate a version of the AICA that could secure bipartisan and bicameral support, and both chambers passed the bill in the waning days of the 114th Congress.

Sponsored by Sens. Cory Gardner (R-CO) and Gary Peters (D-MI), the AICA emerged this year as a potential successor to the America COMPETES Act. The final bill includes compromises in a number of policy areas, ranging from grant evaluation criteria to funding authorizations to large facility management. Notably, the most controversial provisions from the House’s counterpart to the AICA, the “America COMPETES Reauthorization Act of 2015”, are excluded from the final bill.

First update to COMPETES since 2010

Since 2010, multiple attempts to update the legislation failed to win support from both chambers. Most recently, the House approved a COMPETES reauthorization in 2015, but the bill faced strong opposition from the scientific community and key Democrats. The bill passed on a party-line vote and the Senate never took it up.

In contrast with the House’s approach, this year the Senate opted to develop a bill which could garner broad bipartisan support. After holding three roundtables with leaders from the R&D community, the Senate introduced the AICA this June and passed a modified version on Dec. 10 just before leaving town for the year.

However, by then the House had already adjourned, leading many to believe that the bill had no chance of making it across the finish line in the current Congress. Even leaders of the Senate Commerce Committee, which drafted the legislation, appeared to think that time had run out, saying that the committee would reintroduce the bill next year.

But in a surprise move, the House passed the AICA on Dec. 16 by unanimous consent, sending it to the president for signature. (Both chambers of Congress can bypass their procedural rules and pass legislation if no single member objects.) President Obama is expected to sign the bill into law.

“Sending this bill to the White House is an overtime victory for science in the closing days of 2016,” said Senate Commerce Committee Chair John Thune (R-ND) in the committee’s reaction to the House’s move. (The press release’s title, “One Last 2016 Senate Commerce Bill Heads to the White House,” suggests that two other major bills backed by the committee that are pending in the House — the “NASA Transition Authorization Act” and the “Weather Research and Forecasting Innovation Act” — are unlikely to become law this year.)

House Science Committee Chair Smith Lamar Smith (R-TX) also applauded the AICA passage, describing it as the end product of “a four-year effort to strengthen and reform the agencies and programs that administer taxpayer-supported basic research.” 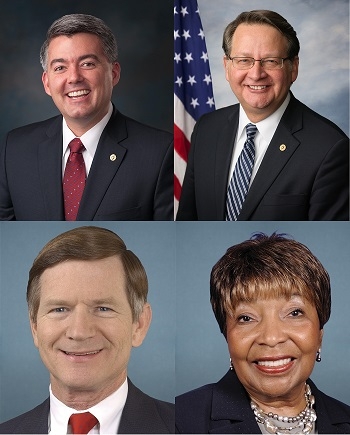 Many doubted that the two chambers would be able to negotiate a compromise given the heated debate over the House’s version of the bill. “I did not always believe we would arrive at this agreement,” said House Science Committee Ranking Member Eddie Bernice Johnson (D-TX) in her statement on the AICA’s passage. “The partisan and widely criticized House-passed version of an America Competes Act Reauthorization (H.R. 1806) was miles apart from the widely supported bipartisan Senate bill.”

Following the House’s move, Gardner remarked that the AICA has “made science bipartisan again,” a phrase he has used multiple times since former National Science Board Vice Chair Kelvin Droegemeier used it to describe the Commerce Committee’s approach to drafting the legislation.

Time will tell whether this spirit of bipartisanship will continue into the next Congress and under a new administration. For the past two COMPETES updates, Congress has waited a few years before revisiting the legislation, although Congress could pursue another COMPETES-like bill next year if it so chose.

A primary point of contention in the House’s COMPETES bill was Smith’s insistence that it require NSF to certify that all projects funded by the foundation are in the “national interest,” as defined by a set of seven goals. These goals included improving the economic competitiveness, health, national security, industry-academic partnerships, STEM workforce, scientific literacy, and progress of science within the U.S. As a demonstration of his commitment to this provision, Smith also sponsored the “Scientific Research in the National Interest Act,” which contained a similar requirement and that the House also passed on a mostly party-line vote.

In contrast, the initial version of the AICA introduced this summer contained no mention of “national interest” and directed NSF to continue to use its current peer review criteria—intellectual merit and broader impacts—when evaluating grant proposals. Smith’s bills would have added the national interest criterion on top of the current two.

The final version of the AICA does not add a new review criterion, but it does include a reference to “national interest” and tweaks the statutory definition of the societal goals on which the broader impacts criterion is based. The updated set of goals are similar to the previous ones, although most now include an explicit reference to the U.S. or the American people. In a statement submitted in the Congressional Record, Smith said the AICA “preserves the intent” of his “Scientific Research in the National Interest Act.”

Another controversial aspect of the House’s COMPETES bill was that it authorized funding levels for specific NSF directorates rather than only providing a top-line number for the agency, as had been the norm in recent years. Although appropriators do not have to abide by these caps, the directorate-level authorizations were viewed as a symbolic means of prioritizing certain disciplines at the expense of others. In particular, the bill set the authorized amounts for the geoscience and social science directorates at more than $100 million below their prior year amounts.

In contrast, the initial version of the AICA authorized top line increases for NSF and NIST and did not specify amounts for individual NSF directorates. However, these funding authorizations were also a stumbling block in the Senate, as at least one senator objected to the bill endorsing increases without identifying a means of offsetting this additional spending. The opposition of even a single member can derail legislation in the Senate, as many bills rely on unanimous consent agreements to circumvent the Senate’s time-consuming formal procedures.

The final version of the AICA simply omits funding authorizations. Johnson lamented their absence in her statement on the final bill:

AICA, unlike COMPETES, does not contain any recommended funding levels, and I believe that is a missed opportunity to send a signal to U.S. scientists and the world about how much we value and need a vibrant U.S. science and technology enterprise.

Below is a summary of additional selected provisions from the bill, broken out by the title in which they appear. Note that the bill does not include any provisions specific to DOE, as those were instead incorporated into a pending energy policy bill that appears unlikely to pass this year.