The National Science Foundation estimates that U.S. R&D funding reached an all-time high of $499 billion in 2015. Of that total, the federally sponsored share fell to a record-low 23 percent while the business sector’s share rose to a record-high 69 percent.

According to new estimates from the National Science Foundation’s National Center for Science and Engineering, total spending on R&D reached $499 billion last year, buoyed by record levels of business spending. If confirmed, this will represent the largest amount the U.S. or any nation has ever spent on R&D in a single year. It is one of a number of indicators that the U.S. remains the international leader in science and technology even as China poses a challenge to U.S. dominance in the field.

Of total U.S. R&D in 2015, businesses funded $355 billion, or 69 percent, continuing a long-term trend of private enterprise financing an increasingly large majority of R&D nationwide. The federal government, the second-largest funder of U.S. R&D, sponsored an estimated $113 billion, or 23 percent of the total. 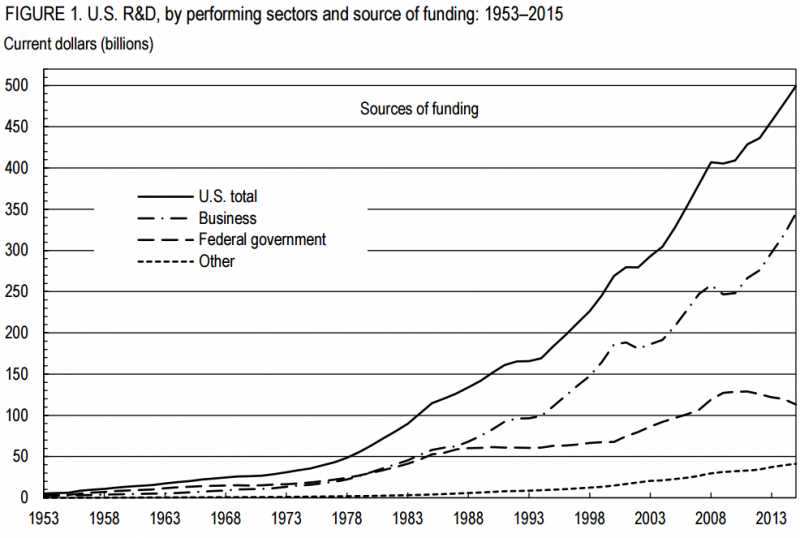 Business-funded R&D has grown over the decades and now comprises about two-thirds of U.S. R&D spending, while federally funded R&D has gradually declined to its lowest point as share of the economy since records began in 1953.

Federal funding for R&D has declined for four years in a row, reaching its lowest level since 2007 in 2015. The federal share of total U.S. R&D is also now the lowest it has been dating back to 1953, when NSF first began recording data on the subject. However, the final fiscal year 2016 spending agreement provided robust funding increases to multiple science agencies, meaning that the federal contribution might increase in 2016.

NSF breaks down total R&D into the categories of basic research, applied research, and experimental development, according to definitions used by the Organisation for Economic Cooperation and Development. The overall distribution between these three types of R&D within total U.S. R&D has stayed remarkably stable since 1970: basic research between 13 and 18 percent, applied research between 19 and 23 percent, and experimental development between 61 and 65 percent.

Since the 1990s, institutions of higher education, state and local governments, and non-profit organizations have also funded significant amounts of basic and applied research.

In 2009, in a speech at the National Academy of Sciences, President Obama proposed that the U.S. spend at least 3 percent of its gross domestic product (GDP) on R&D, promising “the largest commitment to scientific research and innovation in American history.”

That same year, the R&D portion of U.S. GDP reached 2.81 percent, boosted by new, one-time investments provided through the American Recovery and Reinvestment Act, also known as the economic stimulus law. This was the highest share achieved since the beginning of NSF’s time-series data, and it remains the closest the nation has come to reaching Obama’s ambitious goal.

R&D as a share of U.S. economic output was at 2.78 percent in 2015, aided by steadily increasing investments in private-enterprise R&D. This is a continuation of a decades-long trend in which business-sponsored R&D soared from 0.6 percent of GDP in 1953 to almost 2.0 percent in 2014.

By contrast, federally sponsored R&D has declined as a share of GDP from its peak of 1.8 percent, which it reached in 1965 during the Apollo Program. Since then, federal R&D as a share of GDP has declined steadily, with only two multi-year upticks, one in the 1980s under the Reagan Administration and again in the 2000s under the Bush Administration. By 2014, the federal government was investing about 0.6 percent of GDP in R&D.

U.S. R&D spending is at an all-time high, and business and the federal government remain the top funders. Other organizations, including institutions of higher education, non-profits, and state and local governments are increasingly funding R&D as well.

Although there are multiple factors that have contributed to these trends, the Budget Control Act of 2011, which constrains overall federal discretionary spending for a period of ten years, is a major factor in the decline in federal R&D spending over the last five years. Historically, increases and decreases in federal R&D have been strongly correlated with changes in overall federal discretionary spending. Even when there is agreement among political leaders that scientific investments should be a priority, increases in R&D funding often fail to materialize when lawmakers are grappling with strict budget caps and other pressures for fiscal restraint.

For more on U.S. R&D data and trends, key online resources include the National Science Board’s Science and Engineering Indicators 2016 and the American Association for the Advancement of Sciences’ new Federal R&D Budget Dashboard.