This week, the Department of Defense launched a comprehensive review of U.S. nuclear weapons policy. The review comes at a time when members of Congress have become increasingly concerned about the state of the nation’s nuclear weapons enterprise and have begun to debate whether the weapons labs should conduct R&D on new types of nuclear weapons.

On April 17, the Department of Defense announced that it has begun a Nuclear Posture Review (NPR), a comprehensive look at the nation’s policies governing the development and use of nuclear weapons. President Trump directed this review in a Jan. 27 memorandum on “Rebuilding the U.S. Armed Forces,” and DOD expects to deliver a final report to him before the end of the year. Past administrations have also conducted such reviews early in their tenures; previous NPRs were completed in 2010, 2002, and 1994.

It appears unlikely that the latest review will recommend a significant departure from the current overarching plan to modernize all three legs of the nation’s nuclear “triad,” which consists of nuclear-armed submarines, bombers, and intercontinental ballistic missiles. However, overall nuclear force structure aside, Trump appears willing to seek significant shifts in nuclear weapons policy.

On Dec. 22 of last year, then President-elect Trump tweeted that the U.S. “must greatly strengthen and expand its nuclear capability until such time as the world comes to its senses regarding nukes.” And in his fiscal year 2018 budget submission to Congress, he requested an 11 percent increase in funding for the Department of Energy’s National Nuclear Security Administration, which manages the three weapons laboratories — Los Alamos, Lawrence Livermore, and Sandia National Laboratories — that build and maintain the nation’s nuclear warheads. 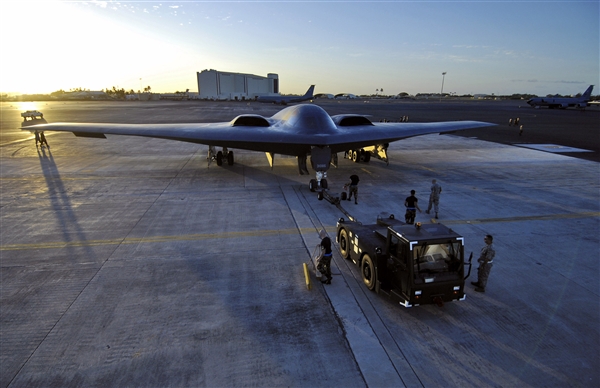 The B-2 bomber is one of the aircraft that makes up the air-based leg of the U.S. nuclear triad.

Ultimately, Congress will have the final say in many nuclear policy matters. Indeed, past presidents’ nuclear weapons initiatives have been stymied by Congress.

In recent years, committees with jurisdiction over nuclear weapons have increasingly drawn attention to the impending costs of the modernization program, infrastructure needs across the vast nuclear weapons enterprise, and the readiness of the weapons workforce.

Together, the hearings demonstrated that there is bipartisan support for modernization (albeit considerable concerns about the total cost, which could be close to $1 trillion over 30 years) and support for actions such as addressing NNSA’s $3.7 billion backlog of deferred infrastructure maintenance. However, they also highlighted some partisan divides. One prominent example was that the DSB’s call for R&D in support of new nuclear weapon capabilities has elicited skepticism and sharp criticism from some Democrats.

In the waning weeks of the Obama administration, the DSB issued a wide-ranging report entitled “Seven Defense Priorities for the New Administration.” One of the seven priorities pertains to enhancing nuclear deterrence.

In the report, the board argues that the nation’s nuclear knowledge base has “largely atrophied,” that modernization has been put off for too long, and that steps should be taken to enhance the capabilities, skills, and readiness of the nuclear enterprise.

Among its specific recommendations, the board advocates for “a more flexible nuclear enterprise that could produce, if needed, a rapid, tailored nuclear option for limited use should existing non-nuclear weapons or nuclear options prove insufficient.”

Such a move is warranted, the board asserts, in part because there is “no clearly identifiable set of activities [that provide] a convincing hedge to future uncertainties, nor has there been since the early 1990s.” The report notes that Congress prohibited R&D of new nuclear military capabilities in 1993, and that such work has not restarted despite a later relaxation of this restriction.

The report also observes that Congress “recently became aware of the situation and purposely included a call for research and development in the 2016 authorization language,” a reference to the Stockpile Responsiveness Program (SRP) created by the National Defense Authorization Act for Fiscal Year 2016. Designed to complement the Stockpile Stewardship Program (SSP), the SRP is meant to provide weapons scientists and engineers with the opportunity to “continually exercise all capabilities required to conceptualize, study, design, develop, engineer, certify, produce, and deploy nuclear weapons.”

At the March 9 hearing, Subcommittee Chair Mike Rogers (R-AL) asked what Congress can do to improve the SRP. “[The DSB] saw your authorization for the Stockpile Responsiveness Program as a huge step forward, but it’s authorized and it’s not appropriated,” DSB member Miriam John replied, adding “So there needs to be some continued encouragement that DOE put money behind it.”

Although Rep. Rick Larsen (D-WA), who was acting subcommittee ranking member for the hearing, did not mention the SRP, he referenced criticisms of nuclear weapon design competitions that were raised at a hearing the subcommittee held last year (see 2016 FYI #8).

The DSB report also casts doubt on whether the nation can indefinitely rely on the SSP’s computer simulation-based certifications of the nuclear stockpile’s reliability in the absence of explosive testing. “An open question remains as to how long one can have confidence in the weapons through these approaches alone,” they assert.

At the March 9 hearing, Rep. Ro Khanna (D-CA) referenced a Washington Post op-ed penned by Sen. Dianne Feinstein (D-CA) that blasts the DSB report’s apparent openness to the idea of “limited use” nuclear weapons. In the article, Feinstein wrote:

Let me be crystal clear: There is no such thing as ‘limited use’ nuclear weapons, and for a Pentagon advisory board to promote their development is absolutely unacceptable. This is even more problematic given President Trump’s comments in support of a nuclear arms race.

Feinstein, who is the ranking member of the Senate appropriations subcommittee for DOE, also argued the DSB proposal is akin to the Bush administration’s pursuit of the Robust Nuclear Earth Penetrator and called the board’s doubts about the SSP “wrongheaded.” She raised these objections in a letter she and 12 other Democratic senators sent to the Secretaries of Defense and Energy on March 14.

What we are trying to say is, in an uncertain future, are we capable and prepared to respond in whatever way the policymakers in this country decide we should? … And that’s one of the things that we believe has been ignored in recent decades, which is how do you think about what potential things you might have to do in the future? ...  And so it's not making a policy recommendation that we should do this or should do that, and I think that's a misreading of our report.

William LaPlante, a MITRE executive and a fellow DSB member, offered another justification in an earlier exchange, saying, “[O]ne of the things that the science and technology community must do is always understand the limits of what physics and engineering can be done.”