According to a new advisory panel review, the Department of Energy’s Laboratory-Directed Research and Development program is a rigorously overseen mechanism for fostering high-value strategic and exploratory R&D at its national labs and is an important tool for workforce recruitment and retention.

On April 18, a Department of Energy advisory panel released a draft final assessment of the Laboratory-Directed Research and Development (LDRD) program, which allows the department’s national laboratories to spend a portion of their budgets on research projects of their own choosing.

The formal objectives of the program are to help maintain the labs’ scientific and technical vitality, enhance their ability to execute their missions, foster creativity and exploratory activities, and support high-risk, high-reward R&D.

Martin Berzins, a University of Utah computer science professor who co-chaired the panel, presented a summary of their findings and recommendations at an April 18 advisory committee meeting. The panel’s four overarching conclusions amount to a strong endorsement of the program:

Panel reviewed a variety of labs

The tasking letter notes that a 2015 Secretary of Energy Advisory Board report recommended that DOE request an independent peer review of the LDRD program’s procedures and impact at four labs. Accordingly, Murray asked the study panel to assess the impact of four labs’ LDRD programs as well as their processes for determining LDRD funding levels, setting lab-specific goals, selecting projects, and evaluating success against those goals and overall program objectives over a 10-year period.

The panel picked these labs because they represent a mix of lab types, have each had an LDRD program for at least 10 years, and none were undergoing contract re-competition at the time of the review. The close proximity of Lawrence Livermore and Lawrence Berkeley National Laboratory in California was also a factor for logistical reasons.

LDRD seen as especially important to the NNSA labs

In its latest report to Congress on the program, DOE said that the labs conducted 1,788 LDRD projects totaling $565.5 million in fiscal year 2016. Notably, the labs make use of LDRD funds to widely varying degrees.

On one end of the spectrum are the three nuclear security labs, which consistently allocate more than 5 percent of their budgets to LDRD. At the other end are the much smaller, more narrowly focused labs – some of which did not even have LDRD programs until recently. 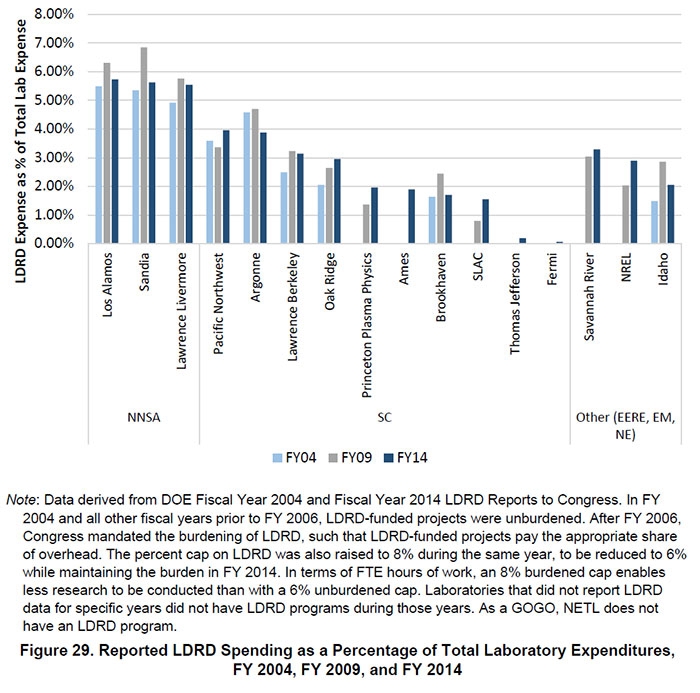 An adapted version of this figure is included in the LDRD review subcommittee’s assessment. The congressionally chartered Commission to Review the Effectiveness of the National Energy Laboratories (CRENEL) created this chart during its sweeping review of the DOE lab system completed in October 2015.

Among their findings, the panel concluded that LDRD is an important tool for workforce recruitment and retention, particularly at the NNSA labs. In fiscal year 2016, 1,034 post-doctoral researchers received LDRD funds – 31 percent of all post-docs working in the lab system.

The proportion of post-docs supported at the NNSA labs is much higher. Lawrence Livermore told the panel that 55 to 90 percent of its post-docs have been supported by LDRD over the past 10 years, with 20 to 40 percent typically converting to staff positions. Reasons for the greater use of LDRD by the NNSA labs include the time required for new staff to acquire security clearances and the opportunities the program offers researchers to work on projects outside of the defense programs.

The panel stresses in its report that “LDRD must be maintained at its present level to attract and retain the high-quality workforce DOE Labs currently enjoy.”

At the April 18 briefing, an ASCAC member asked whether this wording implies that the panel believes the program should not be expanded. In response, a panel member noted that an earlier draft of the document said the program should be maintained “at least” at its present level and that this wording was inadvertently removed during the editing process.

Another ASCAC member asked whether the panel believes the non-NNSA labs should consider allocating more funds to LDRD, given the panel’s high praise for the program. Berzins diplomatically replied that they were not asked to assess the labs’ level of spending on LDRD.

Congress has altered the thresholds governing the amount the labs can spend on LDRD several times over the past decade.

Congress raised the cap in fiscal year 2006 from 6 percent of the labs’ budgets to 8 percent, but also specified that the spending be burdened, meaning that overhead must be charged to LDRD projects. Then in fiscal year 2014, Congress lowered the cap back to 6 percent and kept the amount burdened.

Congress changed these levels once again in the fiscal year 2016 National Defense Authorization Act, which included a provision requiring the NNSA labs to spend between 5 and 7 percent of their budgets on LDRD. The LDRD program director for Los Alamos National Laboratory, William Priedhorsky, reflected on this change in a conversation with Physics Today:

LDRD has found both passionate detractors and advocates in Congress. Never before has Congress specified a minimum. This speaks to someone recognizing that LDRD provides great value.

Congress went a step further last year by including a provision in the fiscal year 2017 NDAA that establishes a three-year pilot program whereby the NNSA labs cannot use LDRD funds to pay for overhead costs.