The House energy research and innovation bill would provide the first-ever comprehensive policy guidance to the Department of Energy’s Office of Science.

On Jan. 24, the House unanimously passed the “Department of Energy Research and Innovation Act,” which would provide the first-ever comprehensive statutory guidance for DOE’s Office of Science and its network of national laboratories. The bill also includes provisions to enhance technology transfer from DOE’s 17 national laboratories, improve research coordination across the department, and boost advanced nuclear R&D. A section-by-section summary is provided below.

Although the Senate has not yet indicated if it will take up the legislation, the bill’s sponsors noted that it is a product of bicameral negotiations begun last year when Congress was considering a broader energy policy bill. The effort to pass the broader bill ultimately faltered in the final weeks of the 114th Congress.

Speaking in support of the bill prior to the vote, bill sponsor and House Science Committee Chairman Lamar Smith (R-TX) said the legislation will “advance basic research and set clear science priorities for the Department of Energy.” He also expressed the view that the Office of Science’s six basic research programs - which include the basic energy sciences, biological and environmental research, advanced scientific computing, nuclear physics, high energy physics, and fusion energy - are “the core mission of the Department and lead to scientific discovery that can provide benefits across the economy.”

House Science Committee Ranking Member Eddie Bernie Johnson (D-TX), also a sponsor of the bill, underscored the value of DOE’s basic research programs to the nation’s international competitiveness and economic future. Noting the Office of Science is the largest supporter of the physical sciences research in the country, she called the 10 national labs it oversees the “crown jewels of our national research infrastructure,” a sentiment later repeated by Rep. Randy Hultgren (R-IL).

Rep. Ed Perlmutter (D-CO) cited climate change and growing international competition as reasons to support the bill, calling it a landmark bipartisan effort. He said entrepreneurs are able to harness the “revolutionary research” emerging from the national labs to start companies and create “hundreds of quality jobs” andcalled out the National Renewable Energy Laboratory located in his district as one example of such an incubator. He remarked,

The neutron sources, particle accelerators, and light sources, among many other Office of Science user facilities, are home to some of the most important scientific work conducted in America and represent some of the best partnerships our labs have with private industry.

Bill draws on science priorities of multiple members of Congress

The legislation incorporates language from seven bills the House passed during the 114th Congress, reflecting a breadth of House member priorities and over three years of legislative work.

Hultrgen, who represents Fermilab in Congress, sponsored multiple sections of the bill. Underscoring the centrality of the labs to the nation’s research enterprise, he explained that tens of thousands of active researchers rely on facilities at the national labs each year to conduct their science: “These facilities are normally operating 24/7, with researchers blocking off time—sometimes just minutes—to use equipment that no one university or business could build and maintain on its own.” 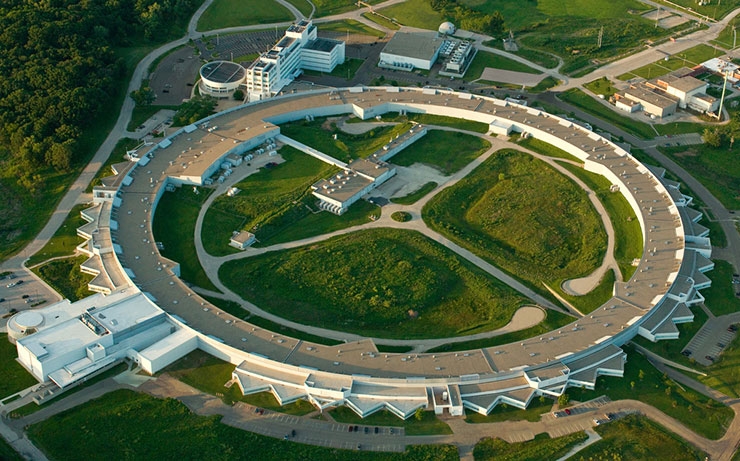 In his House floor speech, Rep. Randy Hultgren (R-IL) highlighted the Advanced Photon Source at Argonne National Laboratory as an example of a DOE user facility that draws many researchers annually.

The bill contains language Hultgren sponsored last Congress that directs DOE to develop two or more exascale computing machine architectures. He touted this effort as critical to maintaining U.S. supercomputing leadership given that “China not only has the fastest computer in the world, but the two fastest computers in the world.”

Rep. Steve Knight (D-CA) highlighted the bills’ provisions, drawn from a bill he sponsored last Congress, that would establish a basic research initiative focused on solar fuels, remarking that researchers up and down the coast of California are already working in the research area and in the process are “train[ing] the next generation of researchers in chemistry, physics, and materials science.”

Right now, we are behind. … The Russians are outpacing us on the next design of nuclear reactors. That is simply unacceptable. We need a versatile neutron source, and Title IV of this will produce a situation where we will have the ability for the national labs to partner with private industry and be able to do that so that they don’t get built overseas, which is totally unacceptable.

In addition, Johnson said she was “proud to note that many of these provisions were actually first proposed in the version of the American COMPETES Reauthorization Act that was sponsored by every Democratic member of the committee in the last Congress.”

If signed into law, the bill would provide comprehensive policy guidance for the Office of Science and its six basic research programs for the first time in the office’s history. Further, it would serve as a guidepost to the new secretary of energy on Congress’ energy research priorities and the value Congress places on the department’s research and the national labs.

Highlights of the ‘DOE Research and Innovation Act’