The National Academies has completed a major study on scientific misconduct and other practices deemed ‘detrimental’ to the integrity of research. Among its recommendations, the study report advocates stricter policies governing scientific authorship attribution, increased openness in scientific work, reporting negative findings, and establishing an independent, non-profit Research Integrity Advisory Board. 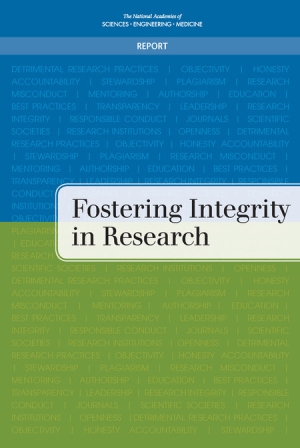 On April 11, the National Academies of Sciences, Engineering, and Medicine released “Fostering Integrity in Research,” an update on the landmark 1992 study, “Responsible Science: Ensuring the Integrity of the Research Process.”

A number of federal agencies and scientific organizations commissioned the new study in view of the major changes in the scientific research enterprise since 1992. These include the increasing scale and complexity of research collaborations, the increasing globalization of science, and the dramatic changes accompanying new information technology.

The report also notes that many scientific organizations and federal agencies have implemented firmer integrity policies, citing in particular the “Federal Policy on Research Misconduct” issued in 2000. And it acknowledges that more has been learned about the nature of scientific integrity from new incidents of misconduct and more intensive study of the subject.

The new report endorses the definition of “research misconduct” offered in the 1992 report and the 2000 federal policy focusing on fabrication, falsification, and plagiarism.

The report retains the category of “other misconduct” to encompass behaviors such as sexual harassment, which are “not unique to the research process,” and therefore, it says, should not be handled through mechanisms specializing in research misconduct. This recommendation comes as the American Geophysical Union is considering classifying harassment and other work climate issues as scientific misconduct subject to that organization’s ethics policy.

The Academies committee did decide to reclassify what the 1992 report called “questionable research practices” as “detrimental research practices” (DRPs). The report explains that researchers and institutions have often tolerated certain suspect practices in the absence of agreement about those practices’ seriousness and what constitutes standards of proper behavior. “However,” the report continues, “this panel has identified some of these practices as not questionable at all but as clear violations of the fundamental tenets of research.” A considerable fraction of the report is occupied with delineating the issues surrounding DRPs.

For instance, the report urges scientific societies and journals to develop discipline-specific standards to combat “detrimental authorship practices.” It unequivocally states that every author listed on a paper should have made a “significant intellectual contribution” to it, and condemns “gift or honorary authorship, coercive authorship, ghost authorship, and omitting authors who have met the articulated standards.” The report acknowledges the various forms an intellectual contribution can take.

The report also insists that research should be more open and accountable. Researchers and their institutions, publishers, and sponsors should implement policies and infrastructure to make available data, computer code, and other important elements of research more accessible. They should also disclose “all statistical tests carried out, including negative findings.”

The report condemns practices that misrepresent the significance of positive results and that obscure knowledge of research programs and methods that fail to yield significant findings.

The report authors exhibit a particular concern with the widely reported inability to replicate a significant fraction of published research results. The report acknowledges that failures to reproduce results can have a number of causes and that a “certain level of irreproducibility is to be expected” in science. Nevertheless, it draws a strong link between DRPs and what it terms the “reproducibility problem,” particularly in certain fields such as clinical research and psychology.

The report asserts that irreproducible research results in major — if difficult to calculate — costs, which include harms associated with relying on false results, the time and effort of researchers who must contend with such results, and the resources put into wasted research. The report suggests, “The financial costs of DRPs in the form of funding for research that does not produce reliable knowledge may be even larger than the analogous costs of research misconduct.” And it considers increasing the openness of research to be an important step in combating the problem.

The report roughly estimates that costs associated with all research misconduct and DRPs “likely fall in a range of hundreds of millions to billions [of dollars] per year.” It notes that extraordinary cases, such as the dissemination of false results linking vaccines and autism or the tobacco industry’s efforts to discredit the consensus concerning the harmful effects of smoking, could individually entail costs on the scale of “millions or even billions of dollars over a period of years.”

The report leans heavily on social science research in assessing the underlying causes of scientific misconduct and DRPs. At an event marking the study’s release, its chair, Georgia Tech professor Robert Nerem, remarked,

The report emphasizes that, rather than simply attributing all instances of misconduct and DRPs to the actions of “bad apples,” it is important to understand the role played by “structural” features of the scientific research enterprise. It points in particular to stresses created by the scientific rewards system and the intensity of competition within the sciences, exacerbated by increasing difficulties in obtaining resources and finding permanent positions for younger researchers.

Although the report notes that developing specific remedies to structural challenges was beyond the scope of the study, it does offer some general recommendations. In its ninth chapter, it delineates best practices that are applicable across all fields of science. It also says that all institutions and organizations associated with science should review and update their policies to respond to threats to research integrity.

The report also observes that science has retained from its heritage as an “avocation” a reluctance to formalize its governance practices along the lines of professions such as law or medicine. It notes, for instance, that mentors are often remiss in actively fostering integrity and that institution-mandated training can be perfunctory. Thus, it recommends improved educational programs in the responsible conduct of research.

However, the report explicitly rejects “relying on increased regulatory oversight,” suggesting it is more important to foster integrity than to react more strongly to misconduct. It also notes that more regulation would add to researchers’ already heavy regulatory burden.

Instead, the report recommends establishing an independent, non-profit Research Integrity Advisory Board (RIAB). The role of RIAB would be to continually review issues related to research integrity and to consult with stakeholders in the research enterprise. It would not, however, serve as a forum for mediating disputes or adjudicating accusations. The report estimates that RIAB would require an annual budget of about $3 million and a permanent staff of three or four individuals supplemented by the work of fellows and consultants.