During their first meeting of the year, members of the National Science Board enthusiastically discussed a proposed initiative to better understand and support the “blue collar STEM” workforce, although some expressed reservations about the label and others probed the extent to which such an effort is within the scope of the National Science Foundation’s mission.

At its February meeting, the National Science Board contemplated a potential new effort focused on the segment of the STEM workforce comprised of individuals without 4-year or advanced degrees. One of the board’s newest members, Victor McCrary, who proposed the effort, outlined his rationale in a presentation during a session organized by the board’s newly-formed Committee on National Science and Engineering Policy.

The title slide of Victor McCrary’s presentation to the National Science Board.

Citing figures from the National Science and Engineering Indicators and research on the “Hidden STEM Economy” by the Brookings Institution, McCrary noted that many occupations filled by workers with high school, vocational, or two-year degrees require considerable STEM skills. He used the label “blue collar STEM” to refer to this category of jobs, although he also emphasized that the changing nature of work requires rethinking the traditional categories of “white” vs. “blue” collar. He offered the following working definition for blue collar STEM: “The technical skills and infrastructure required for workers with less than a 4-year degree to contribute to and take full advantage of today’s economy.”

McCrary observed that NSF currently assists these types of workers, primarily through the Directorate of Education and Human Resources’ Advanced Technical Education, S-STEM scholarship, and Cyber Corps programs. The directorate has also recently supported National Academies studies on the supply chain for “middle-skill” jobs and engineering technology education. Furthermore, he noted, efforts to better characterize this subset of the STEM workforce would be complementary to other NSB efforts, such as its 2015 “Revisiting the STEM Workforce” report and its forthcoming policy brief on career pathways for STEM Ph.D. graduates.

To conclude, McCrary proposed that NSB form a working group on blue collar STEM to “pinpoint NSF’s niche,” begin outreach to other organizations, and organize a stakeholder symposium to be held in the fall of 2017.

Board enthusiastic but uncertain about label and appropriate NSF role

Many board members expressed enthusiasm for the effort, viewing it as a way NSF could help meet national priorities and engage with broader segments of society. For example, NSB Board Chair Maria Zuber reflected on how such an initiative could intersect with the new administration’s priorities:

[The] blue collar STEM discussion will give an opportunity to think about NSF's role in strengthening STEM-capable, technical, and manufacturing workforces. Our goal is to help ensure that the future STEM-driven economy is as inclusive as possible and that the progress of science is driven by the most diverse community possible. This speaks directly to administration priorities of job creation in the United States.

Over the course of the campaign and post-election, I think we heard many, many stories about how job losses have affected segments of American society, and I think many of us have done a great deal of soul-searching about what might we have done to help more, and even those of us who thought that we might have been helping, clearly, we haven't done enough. And science has clearly helped society in general, but if your job has disappeared because of automation, you're certainly not feeling, right now, like science has helped you personally, even though it has. 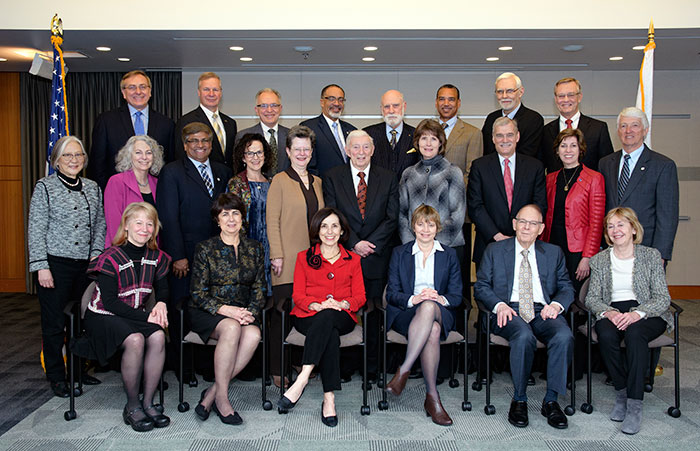 A photo of the National Science Board taken at the February 2017 meeting. See NSB’s website for each member’s biography and affiliation.

Other board members conveyed similar sentiments. “I am very convinced that we are looking at one of the mechanisms that is going to be needed to fill a gap in our society, and I can't think of anything more important that the board can do if we can make a contribution,” said Carl Lineberger. Roger Beachy added “It's an opportunity to introduce the National Science Foundation to a different group of people, if we take the lead.”

However, some board members argued that “blue collar” is not an ideal label. “I think it conjures up an image that would be hard to shed. It's hard to redefine decades of history,” said Ruth David, adding “I would also point out that given by these definitions, Bill Gates and Steve Jobs are blue collar STEM workers.”

Others, though, observed that workers often embrace the label. Summarizing an article on myths about blue collar work, McCrary said “everyone seems to have an objection to the blue collar label except for blue collar workers,” and also noted that the Bureau of Labor Statistics uses the term.

Some board members also probed the extent NSF could or should get involved.

“I think the subject is worthwhile for society; the question is what role NSF should have in this,” said John Anderson. “Is this a high priority for NSF to advance its mission? If we can't defend it that way, we should be very careful, no matter what we call it.” Building off this remark, Julia Phillips noted that large portions of the workforce in need of help may fall outside NSF’s scope.

In response to Anderson’s comment, Arthur Bienenstock pointed to the recently enacted America COMPETES Act update, the American Innovation and Competitiveness Act, which defines developing the STEM workforce and improving public scientific literacy as activities that are in the national interest. “So certainly Congress, as defining it within COMPETES, considers this a part of our charge,” he remarked.

Zuber concluded the session by noting that the changing nature of work has implications for all workers, board members included. “All of us need to be lifelong learners. And so this is really part of a larger question about society, about how we need to train ourselves and keep retraining ourselves and keep learning in order to be relevant in society,” she said.

The board had related discussions about NSF’s role in shaping the workforce of the future during a session on one of NSF’s ten “big ideas” for future investment, “Work at the Human-Technology Frontier.” Fay Lomax Cook, head of NSF’s Social, Behavioral, and Economic Sciences Directorate, gave a presentation on this idea during a session of the board’s Committee on Strategy in which she described four potential foci of NSF-supported research.

Making the case for NSF’s involvement in this subject, Cook remarked, “Everybody is talking about [the changing nature of work], but we at the National Science Foundation are in a position to act, to act by supporting the science and engineering that is going to shape these futures.”