Scientists are hailing the observation of gravitational waves and electromagnetic radiation from a collision of two neutron stars as marking a new era of multi-messenger astrophysics. It is a field of research enabled by expansive international collaboration between facilities of all sizes, and its first success is likely to lead to the further development of its infrastructure. 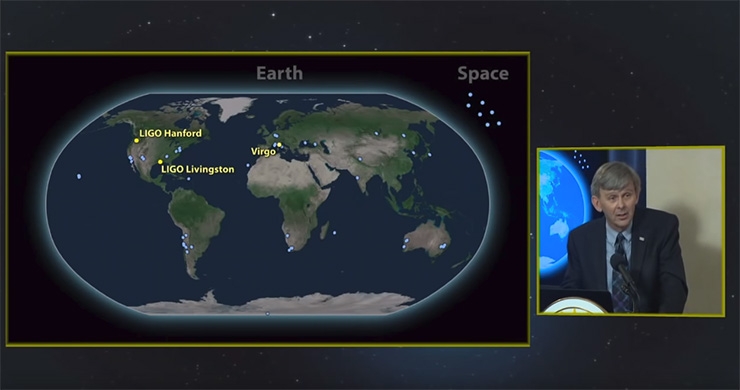 Speaking at an NSF press event on Oct. 16, LIGO Laboratory Executive Director David Reitze discusses the network of facilities that made the first multi-messenger astrophysical observations.

At a press event on Oct. 16, National Science Foundation Director France Córdova announced that scientists had detected gravitational waves from the collision of two neutron stars and that telescopic observatories had located and studied the aftermath. This observation of an astronomical phenomenon through both gravitational and electromagnetic (EM) “messengers” is being hailed as the dawn of multi-messenger astrophysics, a highly anticipated field of research.

The achievement comes less than two years after the NSF-sponsored Laser Interferometer Gravitational-Wave Observatory (LIGO) first detected gravitational waves. Comparing that Nobel Prize-winning effort with the one that produced the latest results, LIGO Laboratory Executive Director David Reitze said, “To do it this time, we joined forces with thousands of astronomers and many, many observatories. So, we did it again, but this time we all did it.”

The entire effort encompassed a collaboration among LIGO and the Italy-based Virgo interferometer, 70 ground and space-based observatories, and a large host of other researchers. The summary paper in Astrophysical Journal Letters has some 3,500 authors with nearly 1,000 affiliations. Participants worked in nations around the globe, receiving funding support from numerous government and private sources.

At 8:17 a.m. EDT on Aug. 17, LIGO and Virgo detected a gravitational wave event conforming to a previously unseen profile, and less than two seconds later, NASA’s Fermi Gamma-ray Space Telescope detected a gamma ray burst event. Five hours later, LIGO issued an alert to observatories declaring that a neutron star collision, or “kilonova,” had been detected and indicating its approximate distance and location in the sky.

Precisely locating the source of the signal presented a challenge for ground-based observers, who could only search for the event in the space of an hour between sunset and the setting of the search area below the horizon. Nevertheless, about 11 hours after the initial detection, six observatories independently identified the kilonova and began their observations. Sending news of their success via communications known as circulars, others soon joined in, making observations across the entire EM spectrum. This speed was essential to catching the event during its critical early stages and before fading made it more difficult to find.

The scale and rapidity of the effort owed to years of preparation and coordination. The LIGO Scientific Collaboration (LSC) — which itself comprises members at over 100 institutions — first approved a policy for releasing gravitational wave triggers to observatories and the public in March 2012. LSC made an open call for letters of interest from observatories in June 2013. This led to memoranda of understanding being signed with an expanding network of participating observers.

While the MOUs ensured that participating groups would act in concert following a triggering event, participants were left to devise their own strategies for searching for and studying it. These efforts took advantage of more longstanding research programs, such as searches for supernova events. According to Jim Ulvestad, the acting director of NSF’s Mathematical and Physical Sciences Directorate, the agency has been funding such “rapid-response” astronomical efforts for about 20 years.

The way each group prepared for the search varied. According to Marcelle Soares-Santos, who works with the Dark Energy Survey, their team had been intensively preparing their search strategy and developing a network of collaborators since late 2013. Dave Coulter, who works on the Carnegie Observatories team that first observed the kilonova, said that his group supplemented a predetermined search strategy “in the moment” with a decision to prioritize locations where as many galaxies as possible could be observed in a single field of view.

Dave Sand, whose group spotted the kilonova with a 16-inch PROMPT telescope, told FYI that his team had signed the MOU “because we did not want to miss out on the excitement,” but without any great expectations of participating in a search. Accordingly, they had assigned their search strategy to a graduate student as a “training exercise for the years ahead.” At the NSF press event, he reported that their success showed that “small telescopes can still play a large role in the coming era of multi-messenger astronomy.”

Sand also told FYI that he hopes the coordination network becomes “a little more sophisticated in the future,” allowing even stronger real-time collaboration. He observed, “There is still infrastructure work to do!”

This week’s announcement was a culmination of many years of effort, but it also anticipates even broader participation and more intricate coordination ahead. Ulvestad told FYI that NSF has to date funded “only a few grants related to multi-messenger astronomy,” with an increase in pace following the completion of upgrades to LIGO in 2015. He added, “We definitely expect the number to increase at a larger rate in the next few years.”

Last year, NSF listed multi-messenger astrophysics as one of the “big ideas” that it hopes to strongly support. Ulvestad said he does not anticipate any targeted solicitations in the area, but he does expect that new small-scale observatories will be built with multi-messenger applications in mind. He pointed to the recently completed Transient Optical Robotic Observatory of the South (TOROS) in Argentina as the first such project to be supported by NSF.

The productivity of small-scale facilities will be enabled by continuing multinational investment at larger scales. At NSF’s press event, Ulvestad pointed out that LIGO was fortunate to detect the kilonova days before the facility shut down for upgrades. Additional facilities will allow for more continuous detection and more sensitive instrumentation will increase the frequency of detections. The Kamioka Gravitational Wave Detector (KAGRA) is due to begin operating in Japan next year, and other detectors are being planned, such as the Einstein Telescope in Europe and LIGO India. Furthermore, scientists expect that the European Space Agency-led Laser Interferometer Space Antenna (LISA) mission, targeted for launch in the 2030s, will open up entirely new frequencies of gravitational waves to detection.

This week’s announcement may also accelerate efforts not built around gravitational wave triggers. The NSF-funded Astrophysical Multi-messenger Observatory Network (AMON) at Penn State University is a computational center designed to correlate “sub-threshold” events, such as neutrino detections and gamma ray influxes, and to relay alerts in the same manner as LIGO alerts. AMON is currently building up its own network of participating institutions.

Participation and coordination could increase at the highest levels as well. Currently, nine funding agencies from around the globe participate in a forum called the Gravitational Wave Agencies Correspondents (GWAC), which was formed through NSF’s initiative. Ulvestad told FYI, “We are working actively to increase the membership of GWAC and hope that events such as the one announced Monday will make our job easier.”