A new report from the Intergovernmental Panel on Climate Change outlines the difficult path to limiting warming to 1.5 degrees Celsius above pre-industrial levels. The Trump administration has neither rejected nor embraced the report, consistent with its generally ambivalent posture toward climate science.

On Oct. 8, the Intergovernmental Panel on Climate Change (IPCC) released a special report, detailing pathways for limiting global warming to 1.5 degrees Celsius above pre-industrial levels and outlining the consequences of exceeding that limit. The report emphasizes that the global economy would have to rapidly decarbonize to achieve the goal, which is enshrined in the 2015 Paris Agreement.

The Trump administration’s response to the report has been muted, consistent with its ambivalent posture toward climate change. While the administration has moved decisively to unwind the Obama administration’s policies to reduce carbon emissions, it has generally refrained from attacking the climate science underlying those policies, defying early expectations it would do so. 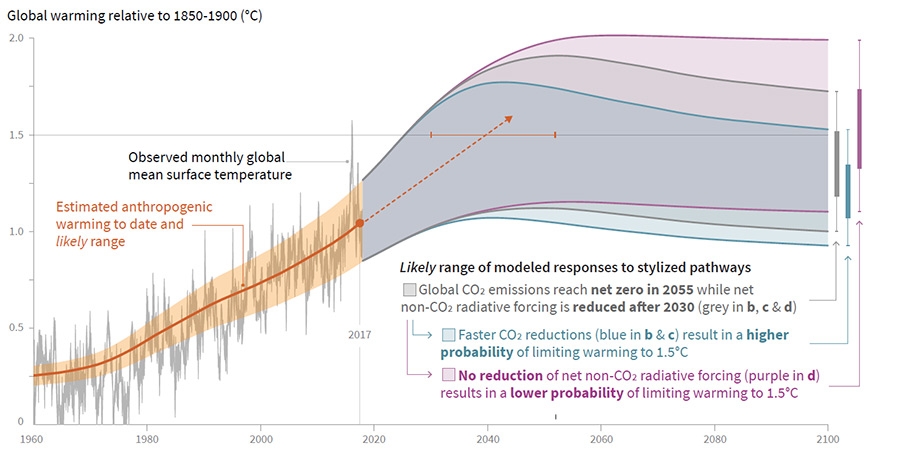 A new Intergovernmental Panel on Cliamte Change special report reviews estimated global warming trends to date and scenarios in which warming could be limited to 1.5 degrees Celsius.

The IPCC produced the report to inform policymaking in the wake of the Paris Agreement and to lay groundwork for its next comprehensive climate assessment. According to the panel, it is the work of 91 contributors from 40 countries and draws on more than 6,000 scientific references.

The report concludes that keeping average global temperatures within 1.5 degrees of pre-industrial levels will require anthropogenic carbon dioxide emissions to decline about 45 percent from 2010 levels by 2030. By 2050, any further emissions would have to be offset by removing an equal amount of carbon dioxide from the atmosphere.

The report observes such rapid decarbonization would require nations to take steps “unprecedented in terms of scale, but not necessarily in terms of speed” to transform their energy sources, industrial production, land use, and infrastructure. It did not consider the potential alteration of the atmosphere to reduce the warming effects of solar radiation, citing the uncertainties, risks, and social, institutional, and ethical constraints associated with such measures.

The report stresses there will be serious additional consequences if the 1.5 degree limit is exceeded even modestly. With 2 degrees of warming, the report states, sea level rise, the disruption of natural ecosystems, and heightened risks to food and water supplies will cause significantly worse problems across more regions and adaptation will become much more difficult.

While the report presents a grave depiction of the future, some climate scientists contend it discounts certain risks and that its conclusions are accordingly too conservative.

The pathways detailed in the IPCC report stand in stark contrast with Trump administration policies, which have prioritized deregulation over emissions reduction.

The administration has already declared its intent to withdraw from the Paris Agreement and to replace a centerpiece of the Obama administration’s climate policy, the Environmental Protection Agency’s Clean Power Plan, with a less stringent regulation. It also unsuccessfully sought a new regulation that would have bolstered the fortunes of coal and nuclear power by providing a financial advantage to utilities with on-site fuel supplies.

In addition, as part of its budget-cutting agenda, the administration has sought to significantly scale back its investment in energy R&D programs, especially in renewable energy. Energy Secretary Rick Perry has said those programs’ successes are worthy of “celebration,” but that many of the technologies they have developed are now “mature" and require no further federal funding. Congress, though, has rejected that reasoning and increased funding for most energy R&D programs.

Despite its disinterest in tackling climate change, the administration has not sought to challenge the new report. Asked by reporters about it, President Trump indicated he had not yet formed an opinion, remarking,

In statements, the State Department and EPA thanked the authors for their work while noting the fact that the U.S. delegation to the IPCC signed off on the report should not be construed as an endorsement of its content by the U.S. government. The State Department also reiterated the administration’s intention to leave the Paris Agreement “at the earliest opportunity absent the identification of terms that are better for the American people."

In another statement, an administration spokesperson pointed to U.S. progress to date in reducing carbon dioxide emissions, noting, “From 2005 to 2017, U.S. CO2-related emissions declined by 14 percent while global energy-related CO2 emissions rose by 21 percent during the same time. This has been possible through the development and large-scale deployment of new, affordable, and cleaner technologies to capitalize on our energy abundance.” 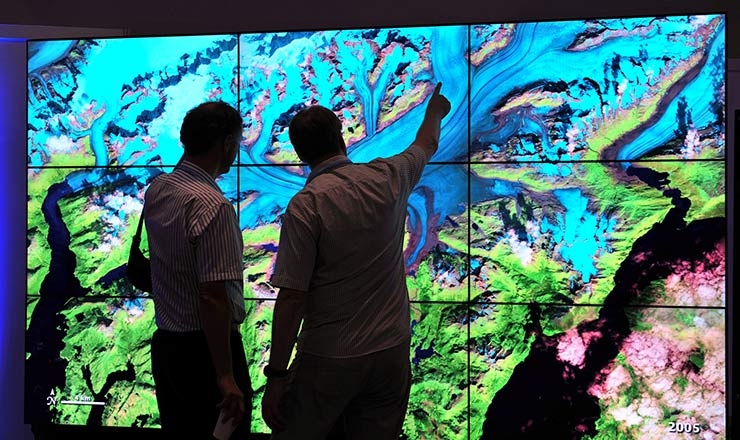 European space scientists view NASA data visualizations at the 18th Session of the Conference of the Parties to the UN Framework Convention on Climate Change, held in 2012 in Doha, Qatar.

The administration’s response to the IPCC report is consistent with its general approach to climate science. While it has unsuccessfully sought funding cuts for many climate research programs and a number of agencies have curtailed their communications about climate change, there have been no reports the administration has interfered with agencies’ climate research and the upcoming Fourth National Climate Assessment.

Moreover, in advancing its deregulatory goals, the administration has not attempted to undermine the existing scientific consensus on climate change. For example, in working to replace the Clean Power Plan, it has not challenged EPA’s endangerment finding, which established the agency’s legal basis for regulating greenhouse gases based on their effects on public health. In another recent case, a draft environmental impact statement produced by the National Highway Transit Safety Administration specifically cited worst-case forecasts of 4 degrees of warming by 2100 as a justification for not implementing fuel efficiency standards because such measures would be inadequate to avoid that scenario.

Perhaps the clearest sign the administration has taken a deliberately hands-off posture is that the White House reportedly quashed a proposal championed by former EPA Administrator Scott Pruitt to subject the climate consensus to a “red team-blue team” debate.

However, if the administration has an official position on climate science, it has not been forthcoming about it. More clarity could come when the Senate confirms Trump’s nomination of University of Oklahoma meteorologist Kelvin Droegemeier to direct the White House Office of Science and Technology Policy.

Droegemeier’s views on climate are ambiguous

The selection of Droegemeier for OSTP director has garnered acclaim from across the scientific community, with supporters citing his integrity and his abilities in both science and science policy. It is, though, unclear what effect his arrival might have on the administration’s handling of climate change.

Droegemeier’s own thinking on the subject is ambiguous, as he has only infrequently discussed it in public settings, and generally not in detail. A presentation he gave in 2014 on “creating sound science policy” offers perhaps the clearest indication of his views. In it, he cited global warming as an example of how science can become politicized. Discussing how scientific assessments should inform policy, he remarked,

The IPCC, it really doesn’t assess the results in the context of policy, it just tells a story. They use very, very careful wording: here’s what we think’s going to happen, here’s the range of uncertainty, so on and so forth.

He lamented that interest groups tend to use such assessments to rationalize particular agendas rather than chart out a range of policy options.

An “intellectually honest” approach to climate science, he continued, would be to accept that “the observations show the planet is warming, the evidence of the models suggest that it’s human induced or there’s a strong human signal, but we don't know everything there is to know about the nitrogen cycle, about all the carbon cycling, ... carbon sequestration.” He said the limitations of climate models should be acknowledged and asserted that “unfortunately” many in the scientific community are hostile to discussion of such uncertainties and limitations.

Offering his own perspective on the climate problem, Droegemeier remarked that“the atmosphere is incredibly resilient,” and that “the planet, you can kick it in the butt really, really hard and it will come back. Is there a tipping point for climate change? I don’t know.”

At Droegemeier’s confirmation hearing, Sen. Ted Cruz (R-TX) asked him whether he believes there is “only one acceptable and permissible view” about climate issues. Droegemeier replied he “welcomes all points of view” on the subject. Echoing the sentiment of his 2014 presentation, he remarked, “I think science is the loser when we tend to vilify and marginalize other voices.”

Sen. Tom Udall (D-NM) asked Droegemeier what actions he would take at OSTP with respect to climate change. Droegemeier replied he would like to see improved climate modeling, a closer integration of climate and weather research, and continued risk and resiliency planning. He did not mention mitigation.

Contacted for additional elaboration on his climate views, Droegemeier replied he is currently unable to offer comment owing to his pending confirmation.