The House Armed Services Committee has approved an amendment to its version of the National Defense Authorization Act that would permit the Defense Department to terminate grants and other awards that provide funds to individuals who have participated in talent recruitment programs operated by China, Iran, North Korea, or Russia.

The House Armed Services Committee approved a proposal on May 9 to allow the Department of Defense to deny funding to students and researchers who have participated in a “talent or expert recruitment program” sponsored by China, Iran, North Korea, or Russia. Rep. Mike Gallagher (R-WI) introduced the measure as an amendment to the House version of the National Defense Authorization Act (NDAA), a sprawling bill updating U.S. defense policy that Congress generally passes each fall.

Although several committee members expressed doubts about the soundness of the amendment as written, it received broad bipartisan support with the understanding the matter will be revisited before the NDAA becomes law.

In addition to its expansive portfolio of technology R&D, DOD funds over $2 billion in basic research and fellowships annually, much of it through universities.

Gallagher’s amendment stipulates that within one year of its enactment DOD must require any applicant seeking “funds for educational or academic training and research, including at institutions of higher education … , policy institutes, federal laboratories, or research institutes, to include with the application a certification that none of the funds received by such applicant shall be made available to any individual” who has participated in a targeted program.

The amendment also directs DOD to develop appropriate certification requirements and authorizes the department to terminate current and future funding to recipients who are unable to provide the required certification. 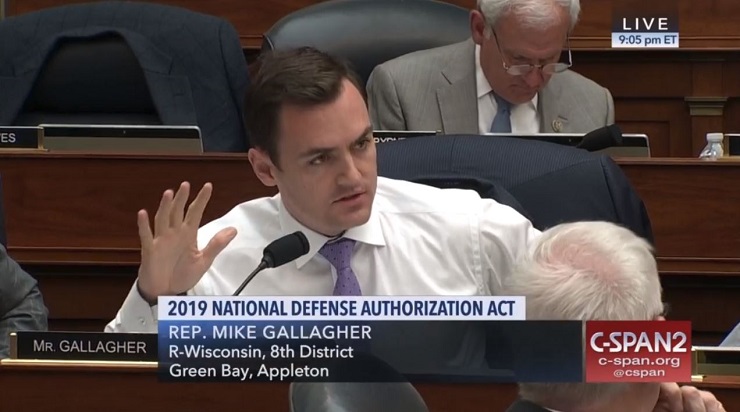 At a House Armed Services Committee meeting on May 9, Rep. Mike Gallagher (R-WI) offered an amendment authorizing DOD to deny funding to researchers who have participated in certain foreign talent recruitment programs.

Introducing his amendment, Gallagher explained to the committee,

For years, experts have been sounding the alarm about foreign talent recruitment programs and their role in facilitating technology transfer to peer competitors. For instance, the Chinese Thousand Talents Program seeks to attract academics to come to China and participate in cutting-edge research in service of the Chinese goal of becoming the leading global science and technology power by 2049.

He also warned, “These foreign talent recruitment programs aren’t only a threat to our technological superiority, I’ve heard specific counterintelligence concerns from the office of the under secretary of defense for intelligence about these programs.”

The Chinese government has operated the Thousand Talents Program since 2008 as a means of enticing both foreign researchers and Chinese researchers working in other countries to relocate to China. Offering high salaries, a large starting bonus, and research funding, the program has supported over 7,000 participants to date. However, the FBI has warned that the program and similar Chinese government initiatives have also served as a conduit for economic espionage. Gallagher did not cite examples of analogous programs operated by the other three countries targeted in his amendment.

Gallagher stressed that his measure is not a “blanket prohibition,” in that it allows DOD to terminate funding for participants in such programs but does not require it to do so in all cases. He also said he expects that, while the measure might dissuade some researchers from seeking DOD support, it would increase awareness of the risks presented by foreign talent programs and discourage people from participating in them.

Both Republicans and Democrats on the committee expressed support for the goals of Gallagher’s amendment. However, several Democrats also voiced concerns that, unless it is modified, the provision could have unintended consequences.

Rep. Adam Smith (D-WA), the committee’s ranking member, argued the provision gives too much leeway to DOD in developing the certification process, saying, “I suspect that the Department of Defense is going to take the attitude of, ‘Look, we’d just rather not have any of these people coming in and not take any risks.’” He urged, “There have got to be some other voices that have some say in how this is done or we’re going to cut off our universities from a lot of talent.”

Smith also warned that the measure could have a “very strong chilling effect” that would hamper recruitment of students from targeted nations who might otherwise remain in the U.S. and contribute positively to its future.

On this last point, Gallagher responded that the amendment’s focus is not on “foreign students or foreign nationals.” Returning to the example of the Thousand Talents Program, he explained that “oftentimes these are Americans of Chinese heritage that are deliberately targeted by the Chinese government for these programs.” He said he supports recruiting foreign students and that acceptance of them is a matter of visa policy, a “separate debate” that his amendment does not address.

Democrats also suggested Gallagher’s measure is too vague, which they said would lead to confusion in its application. Rep. Anthony Brown (D-MD) complained that it does not define or list the programs that it targets and said it would be necessary to get “a clearer sense of the types of programs that are intended to be captured and certified, or not, by what you’re trying to do.”

Smith argued the certification process called for the amendment needs to be better defined to assure universities that funding applications would not be unexpectedly declined. He said they might not risk accepting researchers who could potentially be disqualified from DOD funding because they would not want to “take the chance of losing the money.”

Committee Democrats split on whether to accept the amendment’s inclusion in the version of the NDAA the committee sends to the House floor.

Rep. John Garamendi (D-CA) argued it was not ready for a vote, saying,

This is confusing at least to me, and, I suspect from the conversation, to all of us. I would recommend that we put this aside, maybe take it up on the floor or really have it thoroughly vetted by staff and members that are interested in it. I like the concept, but I don’t think it’s going to work and [it will] create enormous confusion at our universities, and probably within the military also.

However, Smith said he would not ask for a roll call vote on the amendment, allowing it to pass by voice vote. He suggested further work be done on the provision by the conference committee that will meet to iron out a final version of the NDAA after the House and Senate pass their respective versions.

The Senate is undertaking closed-session committee work on its version of the bill this week and will likely not release it publicly until that process is complete. It is uncertain whether that chamber’s version will include any provisions analogous to the Gallagher amendment

Meanwhile, the House is gearing up to consider its version of the NDAA on the floor, where the amendment could be further debated and additional amendments introduced.

Rep. Joe Wilson (R-SC) has already proposed an amendment for floor consideration that would remove the exemption for individuals “engaging in activities in furtherance of religious, scholastic, academic, scientific or artistic pursuits” and who are nationals of countries subject to arms export restrictions from having to register with the Department of Justice as foreign agents. It would also require higher education institutions to disclose contracts with any foreign source “whose mission is to provide language and cultural teaching resources and services” or “is seeking to engage in activities in furtherance of bona fide religious, scholastic, academic, or scientific pursuits, or of the fine arts.”*

*Update (5/23/2018): The House Rules Committee has determined that Wilson's amendment will not be among those considered on the floor. A number of other amendments relating to R&D will be. A complete list of amendments up for consideration is available here.