The Department of Energy has launched a two-year effort to establish a consensus strategy for its fusion research program, using recent long-range planning exercises in high energy physics and nuclear science as a model. 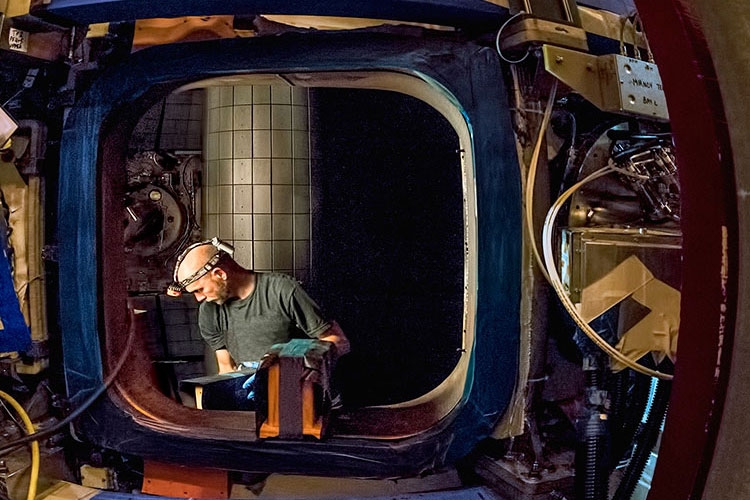 A technician inside the vacuum vessel of the National Spherical Torus Experiment during an upgrade project in 2016.

The Department of Energy’s Fusion Energy Sciences (FES) program is embarking on a two-year effort to hammer out a long-term strategy for the field. On Nov. 30, it tasked the FES Advisory Committee (FESAC) to work with the research community to establish priorities for investment under varying scenarios of budget growth.

Although FESAC completed a similar long-term planning effort in 2014, it was conducted under tighter time constraints and in a more restricted budget environment. The resulting strategy failed to win widespread support. Now, buoyed by a recent budget boost and support from DOE leadership, FES leaders hope the new exercise will produce a consensus strategy.

During the latter years of the Obama administration, the FES program experienced an extended period of turbulence. The world’s flagship fusion energy R&D project, the France-based ITER facility, was mired in rising costs and management turmoil, leading Senate appropriators to repeatedly propose canceling the U.S. contribution. Their House counterparts negotiated to keep funding flowing to ITER, albeit at a reduced level and restricted to “in-kind” contributions of equipment built in the U.S.

Meanwhile, domestic fusion research has also faced considerable challenges. The National Spherical Torus Experiment (NSTX) at the Princeton Plasma Physics Laboratory broke down in 2016 shortly after it received a major upgrade, leading to the departure of the lab’s director. Following the planned shutdown of MIT’s Alcator C-Mod facility the same year, the DIII-D facility at General Atomics in California is now the only major operational facility for magnetic confinement fusion research in the U.S. University-based researchers have also been strained, with a 2017 report by the University Fusion Association describing the community as in a state of “crisis.”

In the past year, though, the situation has improved for FES. Congress increased its budget from $380 million in fiscal year 2017 to $564 million in fiscal year 2019. This has enabled FES to accelerate repairs to NSTX, upgrade DIII-D, and begin work on a new facility for testing materials to be used in fusion reactors. Congress has also shown increased confidence in ITER’s management, allowing DOE to make its first cash payment to the project since fiscal year 2015, though the overall appropriation is still well below the expected U.S. contribution.

FES launched the new strategic planning effort to build on this momentum. Cognizant of the shortcomings of previous planning efforts, it looked to other DOE efforts as models, particularly the 2014 Particle Physics Project Prioritization Panel (P5) report and the 2015 Long-Range Plan for Nuclear Science. Both were produced through a two-phase approach, wherein an initial round of community input was gathered through the American Physical Society (APS) and provided to a federal advisory panel charged with writing the final document.

Accordingly, FES has asked the APS Division of Plasma Physics (DPP) to organize the first phase of its effort. DPP has, in turn, picked seven scientists who will decide how to solicit input from the community: Earl Scime from West Virginia University; Carolyn Kuranz from the University of Michigan Center for Laser Experimental Astrophysical Research; Nathan Howard from the MIT Plasma Science and Fusion Center; Nate Ferraro from Princeton Plasma Physics Laboratory; Wayne Solomon from General Atomics; John Sarff from the University of Wisconsin-Madison; and Lauren Garrison from Oak Ridge National Laboratory.

DPP Chair David Newman told FYI these individuals reflect the topical and institutional balance of the FES portfolio and represent a mix of early career and senior scientists. He stressed another primary selection criterion was their “ability to run an inclusive and open process” that ensures “everyone who wants to be heard is heard.”

In approximately one year, FESAC will create a subcommittee that will use the input from the first phase to produce a final report, with a target completion date of December 2020. 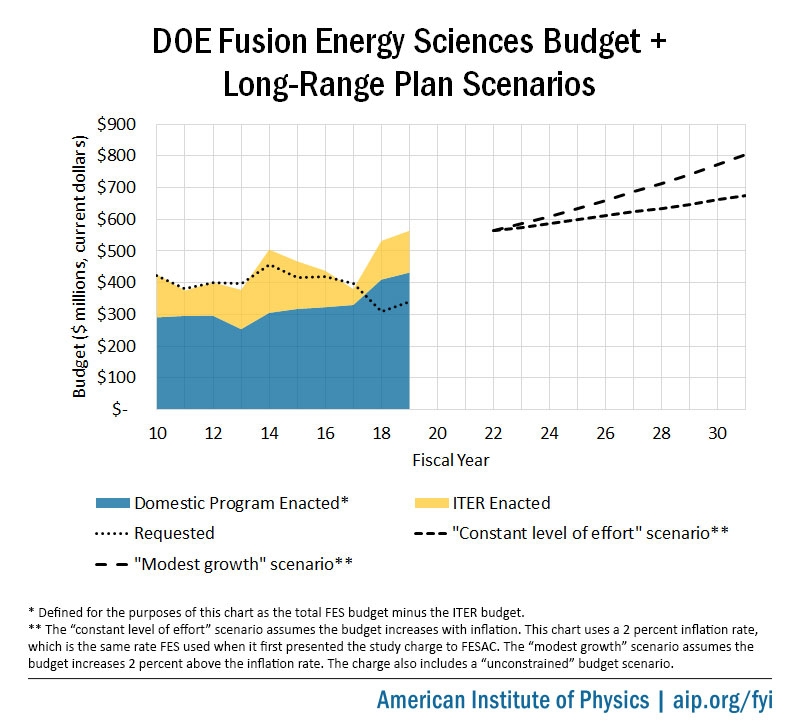 Discussing why the last FESAC planning effort did not succeed, Newman said its timeframe was far too short, making it difficult for the committee to gather input and build consensus. Newman, who was a member of FESAC at the time, said the effort was also hamstrung by conflict of interest rules, which prevented about half the members of the committee from voting on the final report.

That report’s transmittal letter and an accompanying minority report offer further details. For instance, the letter states that many disagreements stemmed from “differing views on the degree to which the FES program is a ‘science’ program versus a ‘fusion energy development’ program.”

The charge for the new study establishes the fiscal year 2019 FES budget as a starting point for two scenarios: “constant level of effort,” which adjusts only for inflation, and “modest growth,” defined as a 2 percent annual increase above inflation. It also specifies an “unconstrained” budget scenario, for which FESAC will produce a prioritized list of activities beyond those considered in the other two. Under all scenarios, FESAC is directed to assume the U.S. will continue participating in ITER.

Newman said he expects the inclusion of the unconstrained, “blue sky” scenario in the new charge will help smooth the process. When solely operating under constrained budgets, he said, “Instead of being positive about your own ideas, you also are negative about other people’s ideas.”

FESAC Chair Donald Rej told FYI the parameters for the study reflect strong support from DOE leadership and will allow the community to dust off ideas that have been shelved due to constrained budgets. Summarizing remarks by DOE Under Secretary for Science Paul Dabbar, Rej recounted, “[He] has even said, I think multiple times, in terms of new ideas and things to execute, ‘if not now, when?’” 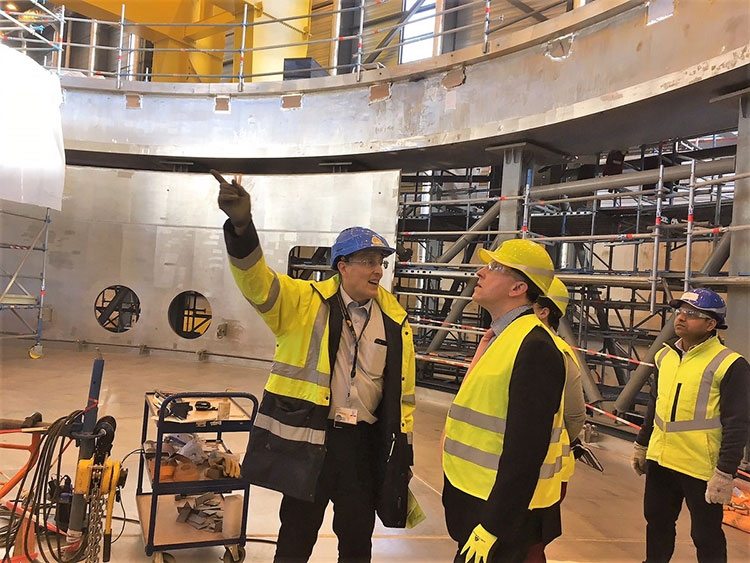 Addressing FESAC at their December meeting, Dabbar said the three pillars of DOE’s current strategy for FES are to continue funding existing research infrastructure (including ITER), assess infrastructure ideas that have been on the back burner, and explore ways to engage with the private sector fusion community. Asked to comment on tensions that arise from the “science versus energy dichotomy” of the FES mission, Dabbar replied,

We very much have a strong opinion that this is both a discovery science and an applied energy [science], and there’s no reason to say it’s either-or, and I mean that very strongly. … We want the community to realize that it is not a zero-sum game between any of those topics.

Dabbar said the new planning effort is an opportunity for the fusion community to forge the type of consensus that other DOE programs have achieved. While the DOE Office of Science overall is viewed favorably on Capitol Hill, he said, this goodwill has been “built on the backs” of program offices that have successfully managed large projects and whose stakeholders speak with one voice. By way of contrast, he described how DOE had to convince skeptical lawmakers to approve cash funding for ITER.

As DOE awaits FESAC’s long-range plan, several related planning efforts are also underway or have recently come to fruition. On Dec. 13, the National Academies published a long-term strategy for DOE’s efforts to generate energy from magnetically confined burning plasmas. It recommends DOE remain committed to ITER and lay the groundwork for a U.S.-based pilot fusion energy plant. It estimates the FES budget would have to be sustained for decades at about $200 million above the current level to support the strategy.

The National Academies also completed a study last year that recommends DOE build at least one large facility to address lagging U.S. capacity in ultrafast, high-intensity laser research, which is a frontier in the study of high energy density plasmas. Furthermore, a decadal survey for plasma science programs across the federal government launched in October. The survey committee is now soliciting white papers that sketch out opportunities in the field.