The House Science Committee's Environment Subcommittee held a hearing on April 26 to examine the current state of research, forecasting, and preparedness efforts related to space weather. Members stressed the importance of improving the nation’s ability to predict space weather phenomena — such as coronal mass ejections (CMEs) and solar winds — in light of their potential to wreak havoc on critical infrastructure, including communications, transportation, and energy systems.

The hearing follows on the heels of NOAA’s annual Space Weather Workshop, held April 16 to 20 in Colorado, which featured discussion of ongoing federal implementation of the 2015 National Space Weather Strategy and Action Plan. 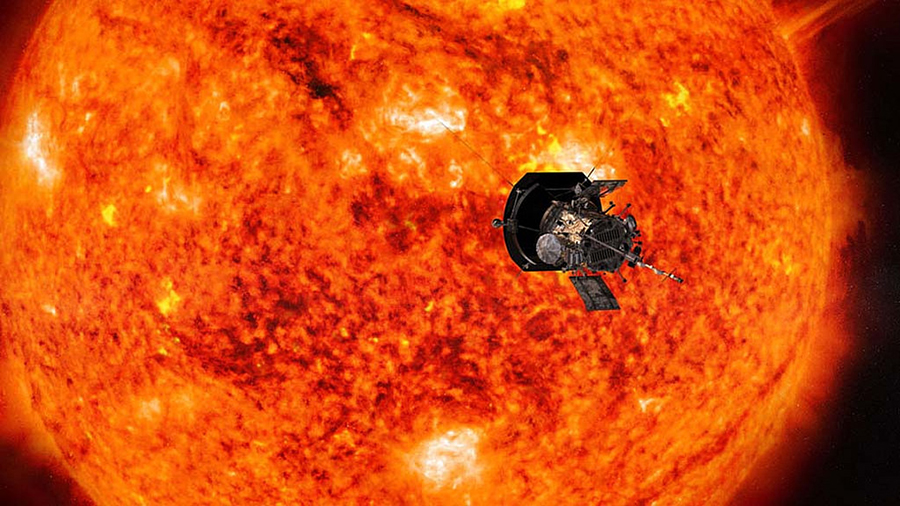 An illustration of NASA’s Parker Solar Probe. The mission, scheduled to launch in July, will swoop into the Sun’s corona to better study solar activity that affects space weather.

“The potential for disruption to society, including the possible destruction of critical infrastructure by space weather events, is alarming,” said Committee Chair Lamar Smith (R-TX) in his opening statement. Solar winds, he explained, can knock satellites out of orbit or disrupt GPS signals, while geomagnetically induced currents can damage pipelines and electricity distribution networks. Smith also pointed out that radiation from space weather can harm astronauts and airline passengers.

While recognizing the space weather community has strengthened its modeling and forecasting capabilities, Smith emphasized “there is still significant room for improvement.” He also noted there have been “promising” private sector efforts to improve space weather research and forecasting and said they should be encouraged.

Environment Subcommittee Chair Andy Biggs (R-AZ) pointed out that while the federal government spends billions of dollars on data collection to enable space weather forecasts, the science is “still in its nascent phase.” He suggested the private sector should take on a larger role, saying,

In the 21st century, the landscape has changed … the federal government isn’t the only game in town nor should it be. … In the face of space weather challenges, instead of continuing to think inside the government-only box, NASA and NOAA need to look to private partners who are ready and willing to help.

He pointed to the Weather Research and Forecasting Innovation Act, which established a NOAA pilot program to partner with the private sector to obtain terrestrial weather observations, as a model to follow for space weather.

Space Subcommittee Chair Brian Babin (R-TX) concurred, saying the government “must now explore ways to expand our capabilities and begin leveraging the private sector.” He pointed out that as industry continues to expand its activities in low-Earth orbit, more companies will become reliant on space weather predictions to protect assets.

Babin also weighed in on the respective roles of NASA and NOAA, the two lead civilian agencies for space weather, emphasizing their collaborative relationship:

[The Deep Space Climate Observatory], built by NASA, is NOAA's first operational satellite in deep space. Orbiting a million miles from Earth in order to provide early warnings of potentially harmful space weather. This NOAA operational capability for space weather analysis and prediction was established through the technology transition of unique scientific instruments researched and developed by NASA. I contend this model represents the way forward for interagency space weather activities.

Committee Democrats expressed their appreciation for the committee holding a hearing on space weather and emphasized the need to increase support of basic research in the field, with Committee Ranking Member Eddie Bernice Johnson (D-TX) remarking, “The need for basic research is clear as many of the fundamental science and physics questions related to the Sun-Earth system and space weather remain unanswered."

She said she hoped discussion from the hearing would expedite committee consideration of the “Space Weather Research and Forecasting Act,” a bill she co-sponsored with Rep. Ed Perlmutter (D-CO) and former Rep. Jim Bridenstine (R-OK), whom the Senate confirmed on April 19 as Trump's NASA Administrator. Among its provisions, the bill would delineate space weather research, forecasting, and preparedness responsibilities across various federal agencies. Noting the bill has broad support from the space weather community, she said its passage is needed to prevent “backsliding” on progress made to date. She continued:

At this critical juncture, it is important for Congress to continue the forward momentum for what was set in motion by the National Space Weather Strategy and the National Space Weather Action Plan in 2015. Space weather research and prediction capabilities are widely considered to be almost 50 years behind the state of terrestrial weather prediction, leaving our society at a disadvantage.

Similarly, Space Subcommittee Ranking Member Ami Bera (D-CA) stressed that “we’re only at the early stages of our ability to predict and forecast space weather,” and that improvements “will require investment in basic research, additional observations, and the ability to transition models into operational use.”

Tobiska said that while the private sector has established productive space weather partnerships with agencies and academia, there has also historically been tension with federal agencies due to their lack of awareness of current private sector capabilities. He continued:

Across the board on the commercial sector we see it [is] extremely important and very possible that the commercial and the academic and the agency guys sit down at some kind of process. Rather than we all being in a swimming pool right now splashing each other, if we could determine a process to determine our swim lanes that would really help … ease any friction in the future and enable us to best use our resources where [we have] expertise in each area.

Jacobs pointed out that NOAA and the White House recently released a request for public input (RFI) on an update to the National Space Weather Strategy, in part due to difficulties in defining “swim lanes if we don’t know what the other swimmers are doing.” He stressed the RFI will help the agency better understand current private sector capabilities, reduce duplicative efforts, and speed up the transition of research-to-operations.

Spann said ultimately the enterprise should move toward a coordinated, “synchronized swimming” approach to addressing space weather. He said NASA’s role is to provide a “fundamental understanding” of space weather through its missions, and highlighted that the agency is rolling out a new space weather science applications program focused on the transition of scientific research-to-operations. That program is expected ramp up in funding to $8 million per year over the next several years to support the establishment of new DRIVE Science Centers.

Designed to bring together multidisciplinary teams to tackle key science problems of solar and space physics, the centers were recommended in the 2012 Heliophysics Decadal Survey. Spann mentioned that NASA has also coordinated with NOAA and the National Science Foundation on the development of a cross-agency plan for the transition of space weather research-to-operations.

Gibson said “space weather legislation is needed now” and that the “Space Weather Research and Forecasting Act” would “​provide a good framework”  for defining roles in the community and promote opportunities for the federal government to leverage international, academic, and private sector capabilities. Perlmutter said it is designed “to help everybody get into those [swim] lanes” through parameters and guidelines on community collaboration.

Perlmutter asked whether there are current structures in place to encourage collaboration in the space weather enterprise. Tobiska responded that the American Meteorological Society, an AIP Member Society, has acted as a “neutral third-party arbitrator” for resolving similar tensions between the U.S. weather industry and NOAA, and has expressed interest in continuing to play that role in the future.

Emphasizing the need for more data collection, Jacobs explained, “We need observations both to initialize the predictions as well as to verify the forecasts. So it's impossible to improve a forecast unless you have observations for verification.”

Elaborating on what he believes should be the ultimate focus of such efforts, he continued, “The current state of the forecasting is we essentially see an event occurring on the Sun and then we can predict how that will impact the Earth, but there’s really no way to predict when these events will occur other than some weak probabilistic guidance. And that, I think, is where the future of the research needs to focus is actually predicting the onset of these events, not what happens once they occur.”

Gibson said that current space weather research and operations are “observationally starved.” She emphasized there is still much to learn about “fundamental physical processes and the complex interactions from Sun to Earth,” and that observations are key to filling in those gaps.

Spann concurred, and pointed out that NASA has several missions that focus on fundamental research, including the Parker Solar Probe which is set to launch in July and the Ionospheric Connection Explorer which is set to launch next month. Also in June, NASA will be launching a new Space Environment Testbeds Project with the goal of better understanding how Sun-Earth interactions affect spacecraft.