The second Decadal Survey for Earth Science and Applications from Space, finalized in early January, calls on NASA's Earth Science Division to prioritize its missions based on a tiered program of target observations. It also provides recommendations for the National Oceanic and Atmospheric Administration and U.S. Geological Survey.

Earlier this month, the National Academies released the final report of the 2017 Decadal Survey for Earth Science and Applications from Space, a comprehensive two-year community effort to chart the future of U.S. space-based Earth observations. At the Jan. 5 report release event, National Academy of Sciences President Marcia McNutt described it as “a consensus report with a recommended program of activities that forms the foundation of the nation’s scientific endeavors in space.” It is the Academies’ second Earth sciences decadal report, following the release of the first in 2007.

Incorporating input and participation from hundreds of scientific community leaders, the report recommends future directions for Earth observing activities at three sponsoring agencies — NASA, the National Oceanic and Atmospheric Administration, and the U.S. Geological Survey. It focuses on NASA, calling for it Earth Science Division to restructure its Earth observing programs around three new program classes, each intended to respond to different needs for observations. The report also provides general programmatic recommendations for NASA, NOAA, and USGS. 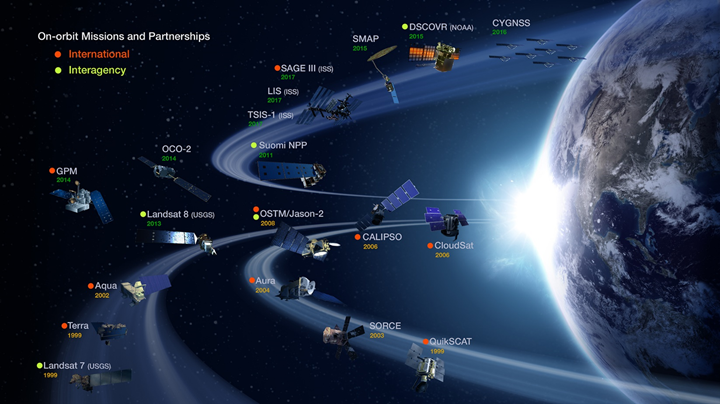 At the release event, the survey co-chairs — Waleed Abdalati, former NASA chief scientist and currently director of the University of Colorado Boulder’s Cooperative Institute for Research in Environmental Sciences, and Bill Gail, co-founder and chief technology officer of Global Weather Corporation — emphasized the report also serves as a public message about the growing importance of Earth observations to society and the need to prioritize federal support for them.

“If you go back 10 years, 20 years, we didn’t use Earth information like we do today. … It really has become an integral part of our daily lives, as individuals, as businesses, as a society,” said Gail.

Explaining why the committee titled the report “Thriving on Our Changing Planet,” Abdalati added,

‘Targeted observables’ recommended instead of missions

Leaning on community input, the committee’s five panels identified 24 priority science and applications objectives “that contribute to answering the most important basic and applied scientific questions in Earth system science.” The committee then identified 22 sets of targeted observables to meet these objectives, classifying them as “important, more important, or most important.” Using additional criteria such as anticipated budget and technical readiness, the report prioritizes the list into tiered classes and recommends NASA implement missions capable of measuring observables within those classes over the next decade.

As a part of the survey, the committee also conducted an extensive review of NASA’s existing and already planned Earth observations missions, known as the program of record. The report calls for the program of record to be completed but also recommends capping it at a total cost of $3.6 billion. Gail and Abdalati stressed that all newly recommended activities should build on the pre-existing program of record. 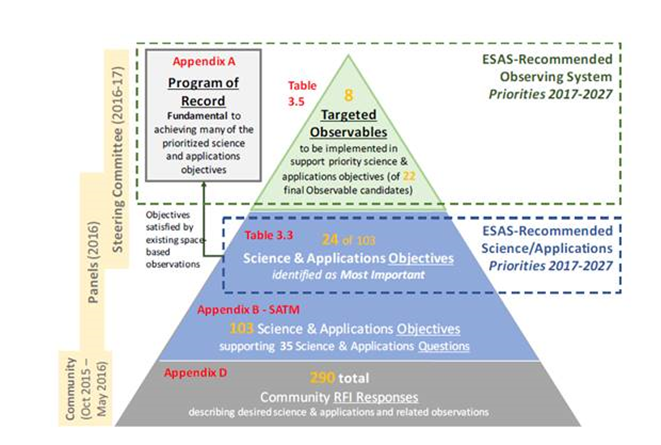 This pyramid depicts the steps the survey committee took (starting at the bottom and moving to the top) to derive its recommendation that NASA address eight sets of “targeted observables” over the next decade.

Of the 22 sets of targeted observables the committee prioritized, the report classifies five as “Designated” or highest priority for NASA:

Three of the five would be obtained through large efforts costing as much as $800 million while two would be medium-sized efforts with costs under $300 million and $500 million, respectively. While each set of observables could be addressed with a focused NASA mission, the committee does not specify this, instead giving the agencies discretion on what missions to implement to meet needs.

The report also recommends NASA address three sets of targeted observables to be selected for seven that are classified as “Explorer,” among them: greenhouse gases, ice elevation, ocean surface winds and currents, ozone and trace gases, snow depth and snow-water equivalent, and terrestrial ecosystem structure.

The report says NASA should choose among these through open competitions conducted through a new “Earth System Explorer” program, which would support medium-sized scientific missions with a $350 million cost cap. This open competition is “intended to mirror the proven success” of analogous Explorer-class programs in NASA’s Heliophysics and Astrophysics Divisions. Gail said that while it is “unfortunate” not all Explorer programs will go forward, the competitions will increase innovation and make missions stronger.

In a third “Incubation” class, the committee prioritizes a handful of additional targeted observables, including the properties of atmospheric winds, the planetary boundary layer, and Earth surface topography and vegetation. These observables were deemed important but require further technology development before they can be implemented in the decade starting in 2027.

An unnamed fourth class includes targeted observables that the committee did not choose for the higher priority Designated, Explorer, or Incubation classes. 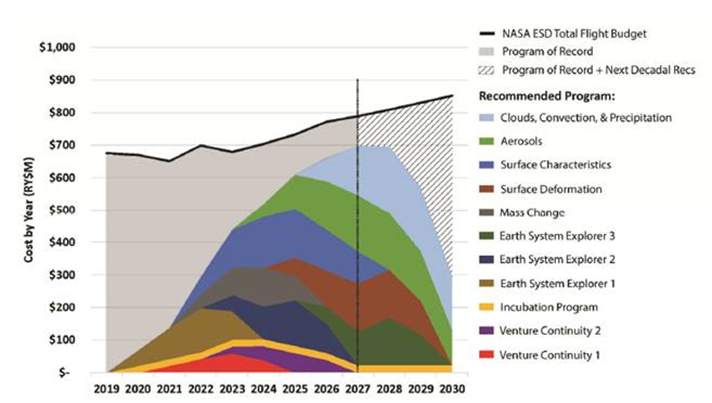 This chart depicts the expected costs of implementing the survey’s recommendations for new NASA Earth Science Division programs against the division’s projected budget baseline. The report calls for the division to complete its current program of record — all its missions underway or already planned — before implementing new recommendations.

For NASA, the committee recommends it maintain the Venture-class mission program while encouraging “new and innovative ways to continue existing measurements at lower costs” through a new program called Venture–Continuity. It further calls on NASA to re-evaluate the structure of Venture halfway through the next decade. The report urges NASA Earth Science to focus in general on constraining cost growth, and emphasizes that since it should not count on rapidly growing budgets “innovation that improves capability and reliability” should be the division’s source of flexibility moving forward.

The report urges NOAA to make it easier for its non-weather offices to use its satellite data. It also calls on NOAA to further leverage U.S. agency and international partner observations and become a leader in “exploiting commercial observations” — an effort already underway through its Commercial Weather Data Pilot Program. And in a recommendation that Gail called “a very big and important point,” the report says NOAA should work with NASA to establish a flexible framework to co-develop technologies to be used by NOAA.

The report calls on USGS to ensure Landsat user needs continue to be understood and addressed while reducing the satellite program’s procurement costs. It also recommends that USGS leverage partnerships, including international collaborations, for Landsat.

Abdalati and Gail pointed out that full implementation of the survey recommendations assumes the Earth Science Division’s budget will increase by at least the rate of inflation over the coming decade. However, both acknowledged the challenging federal funding environment. Abdalati also observed that the first Earth science decadal survey anticipated a rapidly growing budget that never materialized. This severely limited NASA’s ability to implement its recommendations.

Should Congress fail to appropriate the necessary budget increases, the report includes “decision rules” to guide NASA on how to proceed. First, the committee recommends NASA delay the large Designated missions and, second, delay medium-sized Designated missions “unless such delays would threaten critical continuity measurements.” Next, NASA should reduce the cadence of the Explorer missions, “but not to fewer than two competitions over the course of the decade.” The rules stipulate that the Venture-class program and the research and applications programs within Earth Science should not see budget reductions at levels any greater than 5 percent below historical averages.

Should budget cuts be so “draconian” that NASA cannot abide by these rules, the committee advises the agency consult the National Academies standing Committee on Earth Science and Applications in Space for further guidance.

The co-chairs have already briefed leaders of the three sponsoring agencies and key congressional authorizers and appropriators on the report, and they presented the survey at an American Meteorological Society (AMS) Annual Meeting town hall event in Austin, Texas, on Jan. 10.

At the Jan. 5 release event, McNutt anticipated the report will have a major impact, not only because of the care the committee and the scientific community put into developing it but also because the agencies and Congress are “very careful” in following decadal survey recommendations.

At the AMS town hall event, Gail said a more publicly accessible version of the survey report would be released shortly “because the message of the critical role of Earth information to our lives is key.”

“In the end, we need that broad base of support that’s broader than our community,” he concluded.