China’s strikingly rapid expansion of its STEM workforce has continued, according to the National Science Board’s latest Science and Engineering Indicators report.

Several chapters of the National Science Board’s biennial Science and Engineering Indicators report are dedicated to characterizing and comparing the state of the U.S. science and engineering (S&E) workforce with that of other countries.

The latest version of the report released Jan. 18 makes clear that while the U.S. continues to produce a major share of the world’s S&E workforce and publications, China has continued to eclipse the U.S. in output as it greatly ramps up its R&D spending.

China a top producer of S&E bachelor’s degrees, while US leads in doctoral degrees

The report notes that over 7.5 million S&E bachelor’s degrees were awarded worldwide in 2014, with China and the U.S. comprising 22 percent and 10 percent of the global share, respectively. 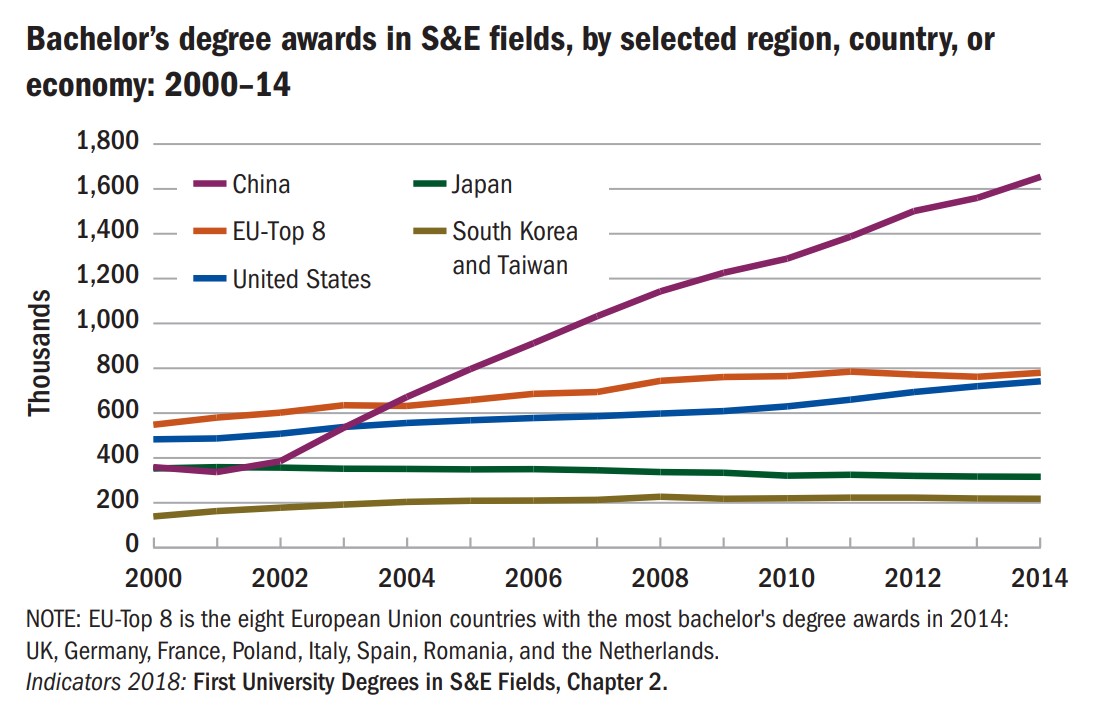 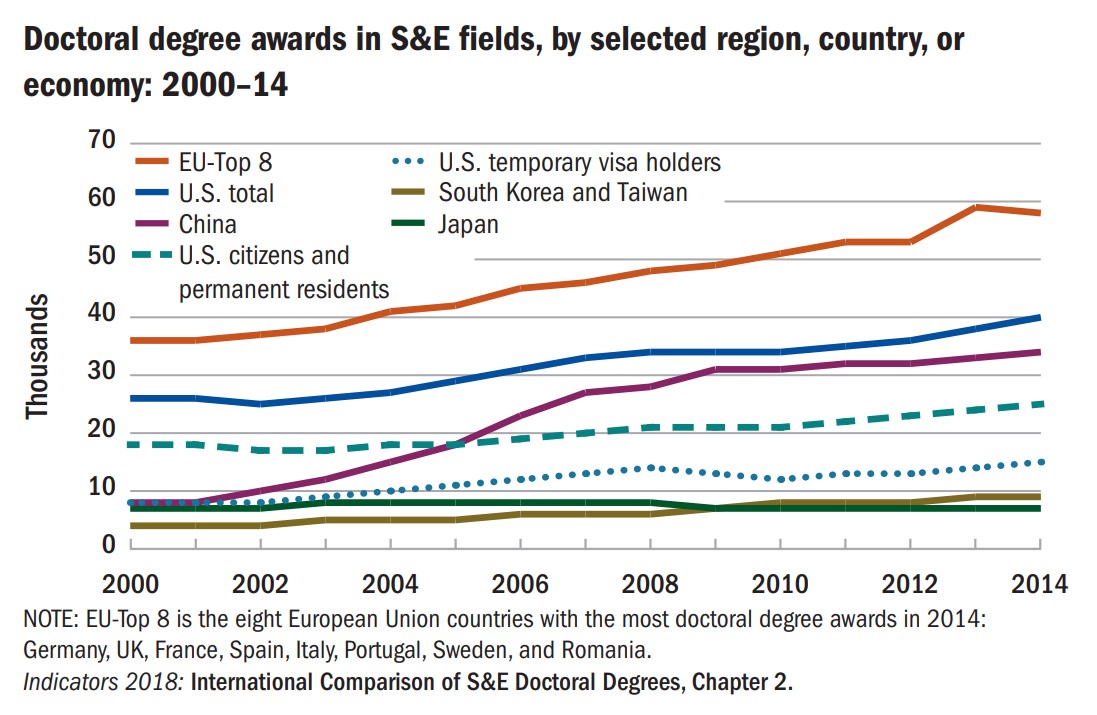 The swift growth in Chinese graduate education, the report says, stems from large investments made by the government over the last 20 years as part of efforts to establish first-rate universities in China. Since 2010, however, the growth rate has slowed as the Chinese government has limited the number of admissions to doctoral programs to focus on education quality.

China now surpasses US in production of S&E publications

The report notes that global S&E publication output increased at an average annual compound rate of 3.9 percent between 2006 and 2016. At the same time, developing economies publication production grew more than twice as fast as the global rate, and increased their global share from 25 percent to 40 percent. Three countries and regions — U.S., China, and the EU — comprise two-thirds of worldwide production of nearly 2.3 million S&E publications. 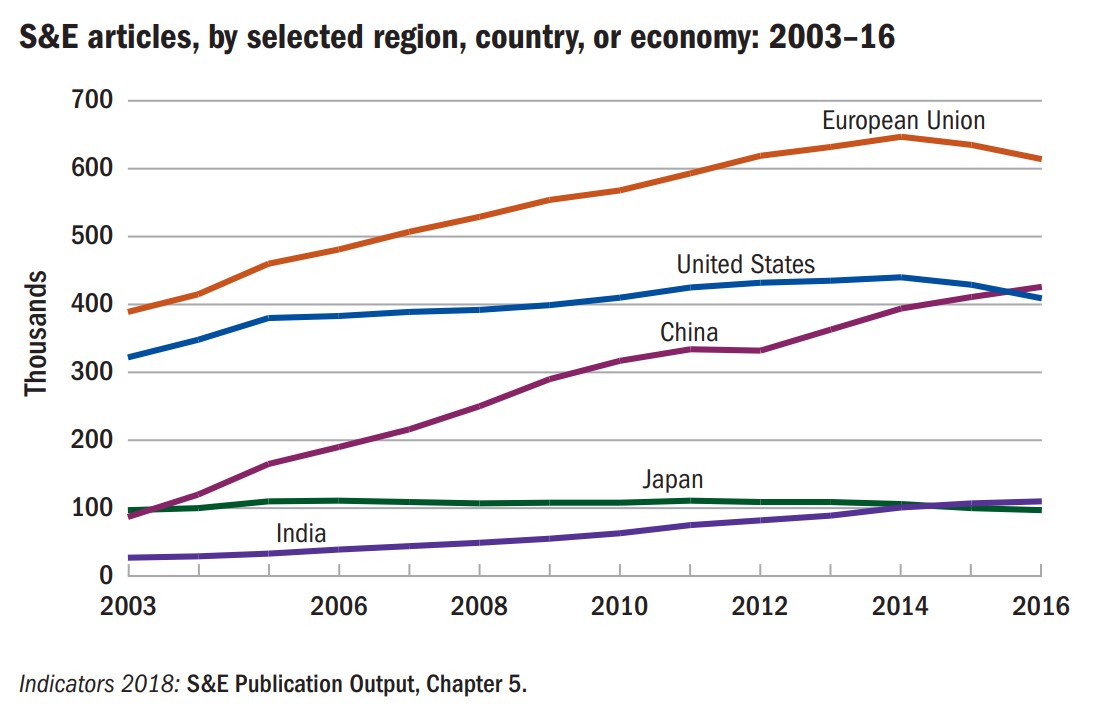 The report finds that there are differing national priorities among the top five S&E publication producers. For example, almost half of U.S. publications focus on the biological sciences, medical sciences, and other life sciences. Chinese publications, meanwhile tend to focus on engineering, chemistry, physics, and geosciences.

Publications produced with international collaboration have also increased from 16.7 percent in 2006 to 21.7 percent in 2016. The report cites growing global S&E capabilities, a greater number of S&E researchers, and the rising importance of tackling transboundary problems as factors for collaboration.

US still the premier destination for international students

In 2015, 34 percent of U.S. S&E doctoral degrees awarded were to international students with temporary visas, rising from 30 percent in 2000. The majority of U.S. S&E doctorates on temporary visas come from Asian countries, with over half of students originally from China, India, South Korea, or Taiwan. According to the report, the number of Chinese students who have earned U.S. S&E doctoral degrees has increased by more than seven times in the last 20 years, and accounted for 29 percent of the total share of international students in 2015.

The rate at which international students receiving U.S. S&E doctoral degrees remain in the U.S. on a short-term basis for employment has generally increased over time. In 2015, 76 percent of these individuals planned to stay in the U.S., while 44 percent had accepted a position or were continuing employment. However, the report notes that the number of S&E doctoral recipients from China and India who plan to stay in the U.S. has decreased since the mid-2000s.

The report also notes international student enrollment in U.S. S&E graduate programs dropped by 6 percent between fall 2016 and 2017. At the release event, NSB member Geraldine Richmond said the board is concerned with this recent shift and “hope that it is just temporary, because they are very important for all sectors of our S&E economy.”

Potential changes to current immigration policies may also impact international student enrollment in U.S. S&E doctoral programs and stay rates for subsequent employment after graduation. The recently released National Security Strategy states the U.S. “will consider restrictions on foreign STEM students from designated countries” in order to prevent theft of U.S. intellectual property, "while acknowledging the importance of recruiting the most advanced technical workforce to the United States." Meanwhile, many scientific organizations have also expressed concern that the Trump administration’s policies could discourage scientists and students from coming to the U.S.

NSB will be discussing the rise of the Chinese S&E enterprise, as well as the state of U.S. science, at two congressional briefings on Feb. 1.