Following last week’s budget deal that all but guarantees huge government spending increases over the next two years, the Trump administration made last-minute changes to its budget request for fiscal year 2019 that spare the Department of Energy Office of Science, National Science Foundation, and National Institutes of Health from proposed cuts. But other science agencies and programs are again slated for double-digit cuts or elimination.

On Feb. 9, President Trump signed into law a bipartisan budget agreement that raises discretionary spending caps and paves the way for huge federal spending increases over the next two years. Three days later, on Feb. 11, his administration submitted its fiscal year 2019 budget request to Congress.

Because the administration prepared the request before the budget agreement was reached, the White House hastily assembled an addendum that proposes how to allocate the expected increases. The administration was poised to propose even deeper cuts than last year’s for several science agencies, but the addendum added back funds to many programs, including the Department of Energy Office of Science, NASA, National Science Foundation, and National Institutes of Health. For example, the main budget document indicates that the proposed cut for NSF would have been 29 percent, far steeper than the 11 percent cut sought last year.

With the addendum, the proposed budget would maintain funding for NSF, the DOE Office of Science, and NIH near current levels. However, the administration chose not to reverse proposed cuts to other science programs, with the National Oceanic and Atmospheric Administration, the National Institute of Standards and Technology, U.S. Geological Survey, and DOE’s applied energy offices, all slated to receive cuts of 20 percent or greater. These proposals echo the president’s austere fiscal year 2018 budget request for science agencies. 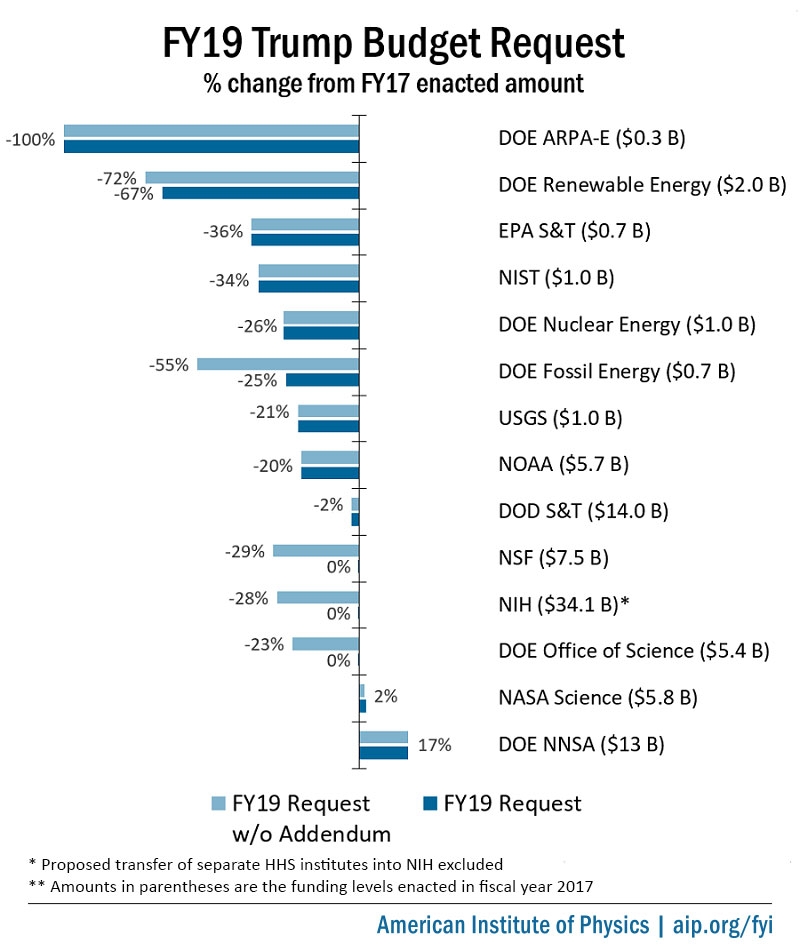 As the White House was putting final touches on the fiscal year 2019 budget request, Democratic and Republican congressional leaders were closing in on their two-year budget agreement. The enacted agreement permits discretionary spending to increase by $385 billion above the previously established caps over the next two years, through a combination of $165 billion in new defense spending, $131 billion in new nondefense spending, and another $89 billion in one-time spending on disaster relief.

Historically, spending increases of this scale have translated into significant funding boosts for federal science agencies and programs. National scientific and university organizations advocated for raising the caps and wrote to Congress urging that it prioritize science funding when allocating increases among the appropriations subcommittees. Several AIP Member Societies are among the signatories of these letters.

Under the terms of the deal, a portion of the increases will go toward certain priorities, including rebuilding the nation’s infrastructure, addressing the opioid epidemic, and supporting research at the National Institutes of Health. The administration also offered its own guidance to Congress on how to prioritize fiscal year 2018 funding under the raised caps. In a document obtained by CQ Roll Call, the administration proposes topline spending levels for the DOE Office of Science, NSF, and NIH at their current fiscal year 2017 levels, echoing proposals in the fiscal year 2019 addendum. It also seeks $551 million of one-time funding to revitalize several DOE Office of Science facilities, $261 million to reconstruct two NIST laboratories, and $300 million for new NASA priorities.

The budget deal also raises the nation’s debt ceiling through March 2019, and includes multiple tax credit extensions, including for nuclear power plants, electric and fuel cell vehicle purchases, as well as a new tax credit for carbon capture and sequestration.

The president’s fiscal year 2019 budget addendum might have provided larger increases to the science agencies, but the administration decided against incorporating much of the agreement’s nondefense spending boost. White House Budget Director Mick Mulvaney explained,

The administration does not believe these non-defense spending levels comport with its vision for the proper role and size of the federal government.

In addition, the budget request includes a fact sheet on the administration’s agency reform and workforce reduction plans, which were expected to be released with the budget. It indicates the administration will release the “President’s Management Agenda,” which will include workforce reform priorities, in March. Other complementary reorganization proposals are also expected to be released later this year “to refocus programs around current and future needs.” For example, the administration says it is undertaking a review aimed at “increasing efficiencies across the Department of Energy’s existing laboratory network.” The administration is also proposing to freeze all federal pay for the next year and pare back a slew of existing federal benefits, while creating a new interagency workforce fund that replaces across-the-board pay increases with “targeted pay incentives to reward and retain high performers and those with the most essential skills.”

The extent to which Congress will rely on the administration’s budget and management reform priorities as it drafts fiscal year 2019 appropriations is an open question. Congress’ decision to set overall spending levels higher than the president’s preferences indicates that it is already taking a different path. Congress has also already demonstrated in the last year that it has the will to chart its own directions on spending, having mostly rejected the Trump administration’s fiscal year 2017 and 2018 budget requests.

FYI will provide details on the fiscal year 2019 budget request in a forthcoming series of bulletins, as full documentation becomes available. Several agencies, including DOE, NSF, and NIH, have yet to release their full requests likely because they require considerable revisions to reflect the increases provided in the addendum.

A few first-glance highlights from the funding proposals are below. Percentage changes are expressed relative to fiscal year 2017 enacted levels since final amounts for fiscal year 2018 are not yet set.