The Trump administration’s policy toward nuclear weapons development and use, articulated in its Nuclear Posture Review, declares the U.S. needs new “tailored” and “flexible” deterrent capabilities and a more “responsive” production infrastructure and technical workforce.

On Feb. 2, the Trump administration released the latest Nuclear Posture Review (NPR), articulating its stance on nuclear weapons policy. The past three administrations also conducted such reviews early in their first terms. Along with the recently released National Security Strategy and National Defense Strategy, the document will shape the administration’s defense priorities over the coming years, although many elements will require congressional backing to implement.

The administration argues that developing such capabilities, along with a more “responsive” weapons production infrastructure and technical workforce, is necessary to hedge against future risks, such as the potential for geopolitical shifts or “technological surprise.” 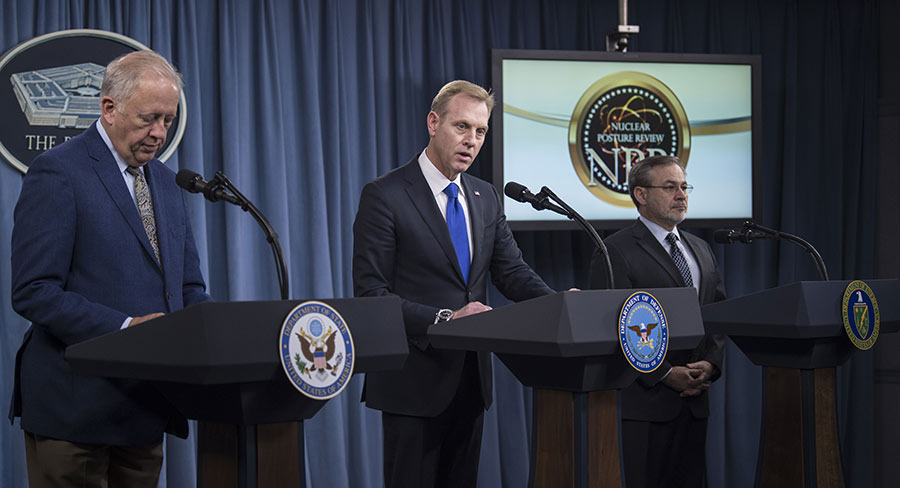 The U.S. arsenal currently has low-yield weapons and previously included sea-launched cruise missiles. Support for further development of such capabilities marks a significant departure from the Obama administration’s NPR, which did not propose new weapon types and sought to reduce the overall role of nuclear weapons in U.S security strategy.

The Trump administration argues that the “return to great power competition” with countries such as Russia and China, along with the security challenges presented by nations such as North Korea and Iran, requires the U.S. to develop more “tailored” and “flexible” deterrent capabilities. Defense Secretary Jim Mattis has also suggested that the new cruise missile could be used as a bargaining chip to persuade Russia to come back into compliance with the Intermediate-Range Nuclear Forces Treaty.

According to a Congressional Research Service analysis of past and present legislative restrictions on R&D of new or low-yield nuclear weapons, current law requires that the administration “must request specific authorization and appropriations from Congress before funding new or modified warheads.” Initial congressional reactions to the NPR indicate that the proposed new weapons will likely face stiff opposition from many Democrats.

The proposal drew a swift rebuke in the form of a letter to President Trump signed by 16 Democratic senators and a statement by the ranking member of the House Armed Services Committee, which argue that the new weapons would lower the threshold for starting a nuclear war and trigger an arms race. They also say that the weapons would add to the price tag of existing plans for sustaining and modernizing the current triad, projected to exceed $1 trillion over a 30-year period, which they assert is already too high.

The administration argues that such weapons would actually lower the risk of conflict by further dissuading adversaries from using their own nuclear weapons. It also asserts that the overall modernization costs are reasonable given the centrality of nuclear weapons to U.S. deterrence strategy. The Republican chairs of the House and Senate Armed Services Committees have praised the NPR, arguing that it reflects a realistic assessment of the current global threat environment.

The NPR contains a chapter dedicated to discussing deficiencies of this infrastructure — more than half of which is over 40 years old, with a quarter of it dating back to the Manhattan Project era. Despite calls for modernization by the previous posture reviews, the NPR states, the U.S. has “fallen short in sustaining a modern infrastructure that is resilient and has the capacity to respond to unforeseen developments.”

The NPR pledges to further support the infrastructure associated with the Stockpile Stewardship Program, through which the weapons laboratories certify without explosive testing that warheads in the current stockpile will function as expected if employed. In particular, it says the administration is committed to “maintain and enhance the computational, experimental, and testing capabilities needed to annually assess nuclear weapons” and assures that it “will not resume nuclear explosive testing unless necessary to ensure the safety and effectiveness of the U.S. nuclear arsenal.”

But in a reversal from the previous NPR, the administration says it will not seek to ratify the Comprehensive Nuclear-Test-Ban Treaty, which has languished in the Senate for decades, although it will continue to support the associated international monitoring system.

And in another departure from the previous review, the administration stresses a need to develop a workforce capable of designing new types of nuclear weapons:

Should a technical or geopolitical development demand a new nuclear weapon, it is crucial that the nuclear weapons workforce possess the skills and the knowledge needed to design, develop, and manufacture warheads of different design in a timely manner. Yet, the United States, unlike potential adversaries, has not executed a new nuclear weapon program for decades. …

The Stockpile Responsiveness Program that Congress recently instituted with bipartisan support explicitly directs that the United States ensure the responsiveness and flexibility of our nuclear weapons infrastructure. This is an important element of the U.S. hedging strategy because it promises to provide more timely availability of new capabilities if they are needed to meet changes in the security environment.

The previous review also articulated a need for NNSA to maintain a highly skilled technical workforce, although with an emphasis on warhead stewardship, not design and development. The call for a more “responsive” weapons infrastructure and workforce is reminiscent of the George W. Bush administration’s NPR, which used the term in a similar manner.

Authorized in the National Defense Authorization Act (NDAA) for Fiscal Year 2016, the Stockpile Responsiveness Program is designed to complement the stewardship program. Proponents of the responsiveness program argue that the stewardship program does not offer weapons scientists and engineers opportunities to exercise the full set of skills required to develop new types of weapons.

The program has secured an initial appropriation and may receive a large funding increase in fiscal year 2018. Furthermore, Congress has already provided the program further impetus through the NDAA for Fiscal Year 2018, which directs NNSA to conduct a nuclear warhead design competition.

However, conducting such a competition is not without controversy. Reservations about the concept were aired at a 2016 hearing on a National Academies study of nuclear weapon design competitions and at a 2017 hearing on recommendations by the Defense Science Board. Among the concerns are that other countries could interpret it as a step toward developing new weapons, even if the primary purpose is to maintain workforce readiness.