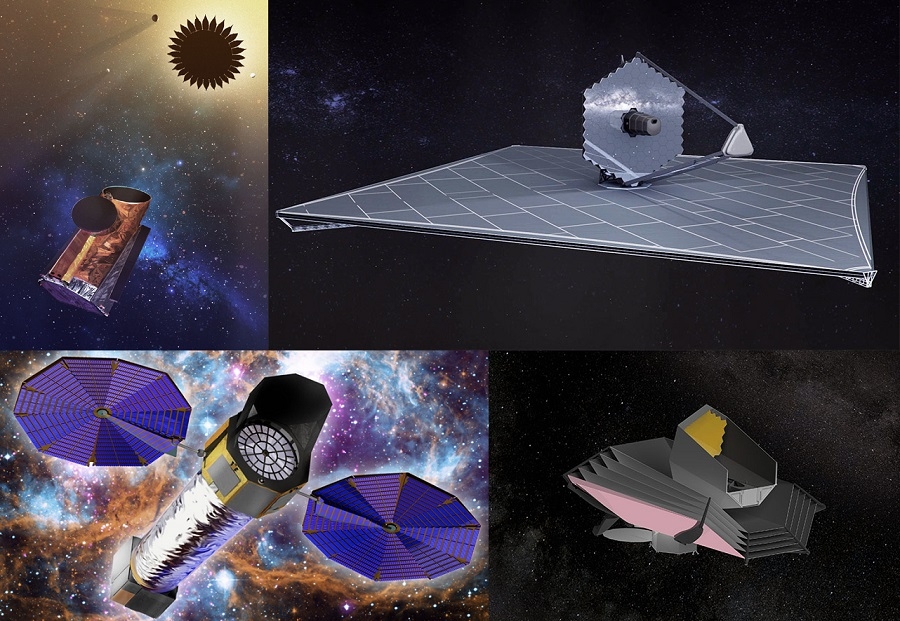 As the National Academies decadal survey for astronomy and astrophysics digs into the work of setting the field’s agenda for the 2020s, the future of large-scale telescopes hangs in the balance.

Over the last two decades, NASA has grappled with cost overruns and schedule delays on such projects, which are referred to as “flagships” or “large strategic missions.” However, Paul Hertz, the director of the agency’s Astrophysics Division, told the survey’s steering committee last month at its first meeting that these missions are still well worth pursuing and that NASA wants the survey to produce an “ambitious” vision. He also sought to dispel notions that flagships eat into the budget for other activities and stressed that they produce uniquely pathbreaking science, offering arguably greater science return per dollar than other missions.

The survey, known in shorthand as Astro2020, is tasked with presenting consensus priorities to NASA and the National Science Foundation on behalf of the U.S. research community. Much of the discussion at the kickoff meeting centered on clarifying the agencies’ aspirations for the survey given uncertainties about future budgets as well as the serious burdens the most ambitious projects entail.

Although NASA pursues many more smaller-scale missions, flagship missions such as the Hubble Space Telescope have proven to be among the agency’s most notable successes. However, NASA’s experiences with the James Webb Space Telescope (JWST) have highlighted the risks involved with such missions.

At that time, WFIRST was not envisioned as a flagship, but subsequent design changes elevated it to a flagship-scale budget of more than $3 billion. Although the Trump administration has proposed cancelling WFIRST, Congress has continued to fund the project alongside JWST, though it has placed caps on both missions’ costs.

It is within the Astro2020 committee’s purview to weigh in on WFIRST, including recommending that it be descoped or cancelled. Hertz made the case for proceeding with WFIRST, saying he believes it has become a more compelling project over time and is on track to stay within its budget and launch in the mid-2020s, provided Congress allocates the necessary resources year over year. A timely launch would leave space to begin work on another flagship mission later in the decade.

There was a period five or seven years ago, where the political leadership of NASA thought that NASA should do small missions and not large missions and was against us doing anything that was called a flagship, so we stopped using the word. We have different leadership now, and I'm pleased that we use the word appropriately.

Pushing back on the notion that such projects are inherently “too big to fail,” he said, “I don’t believe anything is too big to be terminated.”

In his presentation, Hertz provided data to challenge what he called “myths” about the effects of flagship cost overruns. Disputing the view that JWST has taken up an “oversized” fraction of the Astrophysics Division budget, he said that since the late 1980s the division has always spent between about 50% and 70% of its budget on developing flagship missions, with the current amount standing near 50%. Attributing misperceptions that newer missions are more expensive to the “tyranny of inflation,” he noted JWST’s costs are comparable to those of the Hubble telescope once appropriately adjusted.

Hertz also said it is not true that flagship cost overruns take resources away from other programs, but rather that NASA preserves program balance between large and small missions by delaying the next flagship. He stressed that eliminating flagships would not necessarily result in more funding for other astrophysics missions, suggesting that Congress would be apt to allocate the money elsewhere.

“It is not the case that NASA gets a pot of money and we are [told] ‘please do whatever you want for it, but do good stuff.’ We get funded to do specific things,” he said. “The best flagships create stakeholder support, because our stakeholders become interested in the science.”

To guide the committee’s work, Hertz offered several notional budget scenarios. As a lower bound, he noted that outyear budget projections for the Astrophysics Division in NASA’s latest budget submission to Congress averages to about $1.1 billion annually, which assumes WFIRST will be cancelled.

To construct an “empirical scenario,” he averaged the enacted funding levels for the past three years, which amounts to $1.4 billion per year. He offered 1% and 2% annual inflationary increases above that level as two scenarios of budget growth. 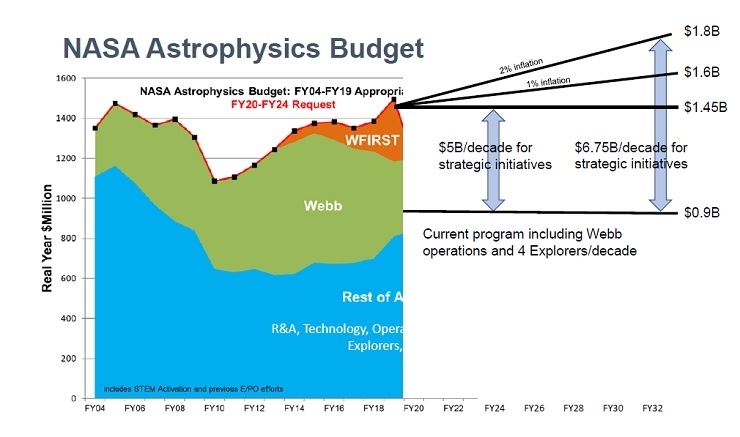 A “sand chart” with NASA’s set of notional budget scenarios for the Astro2020 committee.

However, Hertz advised the committee against “playing sand chart games” and trying to fit funding profiles within any particular budget scenario. He urged that it instead focus on articulating the science case for why any given mission concept should be pursued and demonstrating that a “notional” architecture is capable of delivering that science.

To give the survey committee a head start on fleshing out possible missions, NASA has funded four concept studies for large missions as well as 10 concept studies for medium-scale “probe-class” missions. The research community was also free to submit additional concepts directly to the committee. Hertz noted for instance that one such proposal involves reservicing the Hubble telescope to extend its lifetime, which he said would constitute a flagship mission.

Hertz said recommendations on how to balance cost versus mission cadence are one of the most useful types of advice the committee could provide. “Depending on whether you look at a pessimistic or realistic or an optimistic future budget scenario, you could trade more probes, slower flagship, faster flagship, fewer probes,” he said.

Given the relatively modest projections of budget growth, one committee member asked Hertz to comment on whether it would be a “non-starter” for the committee to recommend an ambitious program that would require a far larger budget to implement. Hertz answered indirectly, stating, “Only if there is something compelling that would cause stakeholders to give us more than is requested would the budget be more than $1.1 billion.”

As the lead agency for ground-based astronomical observatories, NSF faces a related yet distinct set of challenges as NASA in supporting large telescopes. In particular, several major telescopes funded by NSF have entered or neared operations during a decade of relatively flat budgets.

While NSF has worked to divest from older facilities to free up resources for operating newer ones, the impending completion of the top-ranked ground-based mission from the 2010 survey, the Large Synoptic Survey Telescope, is expected to place additional strain on NSF’s other astronomy programs.

Despite these challenges, the deputy director of NSF’s Astronomical Sciences Division, Ralph Gaume, sounded a similar note as Hertz, calling for the committee to provide a vision that is “aspirational, inspirational, and transformative.” In his presentation, Gaume provided a notional ambitious budget scenario for the Major Research Equipment and Facilities Construction (MREFC) account, a NSF-wide account that funds construction projects over $70 million. 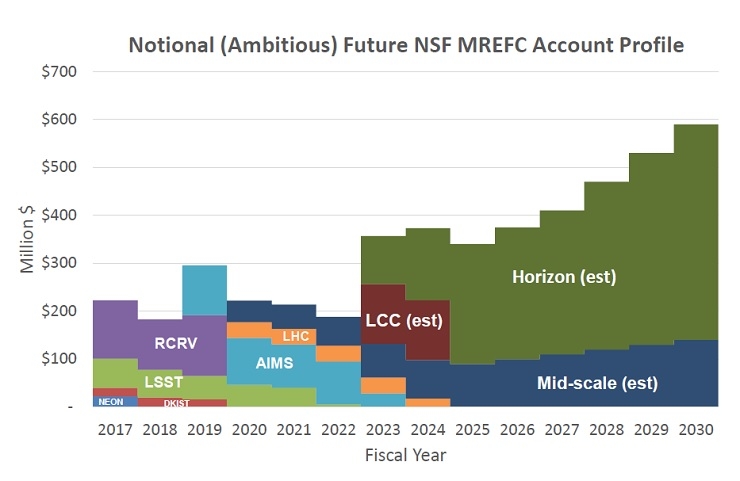 Gaume did not provide a range of budget scenarios, instead stressing the committee should provide “decision rules” that enable NSF to adjust its investments if the actual budgets are lower than the ambitious scenario. He made clear that NSF has no expectation that scenario will be realized, though he noted the agency is actively considering options for mitigating the burden of rising facilities operations costs, such as seeking approval to use the MREFC account to support such costs.

In a separate session, committee members asked staff from the White House Office of Management and Budget to provide their perspective on flagship missions and the value of an ambitious decadal survey.

Grace Hu, a program examiner for NASA, said that while OMB is “not inherently adverse to large missions,” it is concerned about cost overruns affecting other parts of the science portfolio. Furthermore, when large missions encounter problems, she said, “it's really hard to cancel or significantly rework them due to entrenched interests because they end up being too big to fail.”

Hu encouraged the committee to consider a range of budget scenarios and offer prioritization guidance that helps “really remove the ambiguity from what is meant by a balanced program.” While she said discussions within OMB on NASA’s topline budget are not influenced by whether the astrophysics program is particularly compelling, she indicated such considerations are not completely irrelevant to their work.

“We're not always recommending the lowest cost option, we are also looking at value for the taxpayer and benefit to the nation, which I think gets back to the compelling science and the ambitious component of your discussions,” she said.