The National Space Council has asked NASA to further develop its plans for establishing a sustained presence at the Moon. To do so, the agency will have to balance its aims of enabling the exploitation of lunar resources and preparing for an eventual crewed mission to Mars. 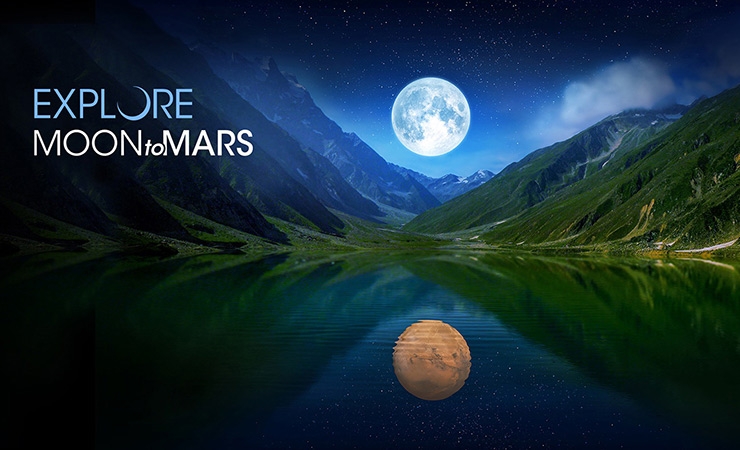 On Aug. 20, the National Space Council recommended that within 60 days NASA should produce a plan for “sustainable lunar surface exploration and development” and set up an associated office, with the ultimate goal of enabling crewed missions to Mars. The council also tasked its staff with developing a broader “Moon-Mars Development Strategy” within 180 days.

The council’s actions build on Space Policy Directive 1, a presidential memorandum signed in December 2017 that made it U.S. policy to return humans to the Moon “for long-term exploration and utilization, followed by missions to Mars and other destinations.” In accord with the directive, NASA, private-sector contractors, and the lunar science community initially planned to intertwine exploration, science, and commercial activity within a stepwise campaign that would include crewed lunar landings as early as 2028.

Now, though, NASA’s plans have become murkier, primarily on account of the administration’s decision to move up the landing date to 2024, but also in view of President Trump’s recently expressed interest in a crewed Mars mission. NASA Administrator Jim Bridenstine has said the U.S. will still pursue a sustained lunar presence as well as crewed Mars exploration, but it remains unclear how the agency aims to balance those two ambitions against each other.

Invited to address the council at its sixth meeting, University of Notre Dame lunar scientist Clive Neal described a vision for a robust lunar agenda, warning the Moon should not be “a stepping stone or a box to check on the way to Mars.”

To establish a sustained presence on the Moon, Neal argued that international competition should be eschewed so that other nations and corporate partners can help build up Moon-based assets that would enable people to “learn how to live and work productively off planet.” He also urged that space exploration must “deliver a return on the taxpayer investment, such that the budget of our space agency is viewed as an investment in the future of this country.”

To meet these objectives, Neal said lunar exploration should focus on resources that can both sustain activities there and be extracted for applications on Earth and in space. He argued the “most immediate and vital” task is to determine whether lunar resources constitute “reserves,” which he defined as resources that are of known size and composition and can be extracted economically

Neal continued, “Mobile surface assets are critically needed to map out the area, vertical extent, concentration, and composition of any resource. Note that prospecting is not done at just one location. It is conducted at several in order to find the best places for infrastructure investment. Thus geologic prospecting on the Moon needs to be a campaign that crosscuts through NASA’s mission directorates.”

Notably, Neal was a signatory of a letter that protested NASA’s sudden cancellation last year of its Resource Prospector lunar rover mission. NASA said at that time it would incorporate elements of the mission as payloads on landers developed through the agency’s new Commercial Lunar Payload Services (CLPS) program. NASA has also indicated it plans to land a rover in the lunar south pole region, where water resources are believed to exist, in advance of the crewed landing there.

So far, more concrete plans for lunar resource exploration have yet to emerge. When NASA announced its first three CLPS missions in May, all were to scientifically appealing destinations on the near side of the Moon rather than the south pole. Then, in July NASA cancelled the first of the three missions, meaning the first landers are not planned to launch until 2021. However, NASA also announced it is seeking new CLPS partners, stating the program is looking toward its “next phase,” featuring heavier payloads that could include a rover.

One of my takeaways today is Dr. Clive Neal’s use of the term ‘prospector’ to describe activities on the lunar surface and on Mars, and it brings to mind the Old West. And it’s just exactly how we ought to be thinking about ensuring that we’re developing the resources of space and giving taxpayers a return on investment, as you said so well.

It remains uncertain whether Congress will provide even initial funding for the administration’s 2024 crewed landing plan, let alone support an ambitious follow-on lunar exploration campaign. But another question bearing on NASA’s lunar plans is how soon after a crewed landing the agency would begin devoting substantial resources to a crewed Mars mission.

Under the Trump administration, NASA has cast its lunar exploration campaign as the first step in a broader “Moon-to-Mars” endeavor. The agency considered establishing a new mission directorate devoted to Moon-to-Mars activities, and in April hired former space industry executive Mark Sirangelo to spearhead its creation. However, the agency abandoned the plan after meeting resistance from Congress and Sirangelo left NASA after a little more than a month.

In June, NASA’s plans for Mars became a more immediate concern when President Trump admonished the agency about them on Twitter, writing, “For all of the money we are spending, NASA should NOT be talking about going to the Moon — we did that 50 years ago. They should be focused on the much bigger things we are doing, including Mars (of which the Moon is a part), Defense and Science!”

Bridenstine quickly insisted that Trump simply wants the agency to be more vocal about its Mars plans within the existing Moon-to-Mars agenda. But the issue surfaced again in July at a White House event commemorating the 50th anniversary of the first Moon landing. On camera, Apollo 11 astronaut Michael Collins suggested to Trump that the administration pursue a “Mars direct” policy. Turning to Bridenstine, Trump asked him to defend NASA’s lunar plans, saying, “It seems to me, Mars direct. I mean, who knows better than these people?”

Trump’s interest in Mars has not led to changes in the administration’s stated policy, but NASA remains sensitive to his views. At the National Space Council meeting, Bridenstine took a lighthearted approach to the situation, presenting a custom White House box of M&M candies to Pence. He explained that a member of the National Security Council gave it to him as a reminder to focus on Mars as well as the Moon.

Laughing, Pence told Bridenstine he would pass it along to Trump. “He’ll know even better today that you got the message: it’s M and M. That’s worth remembering,” he said. 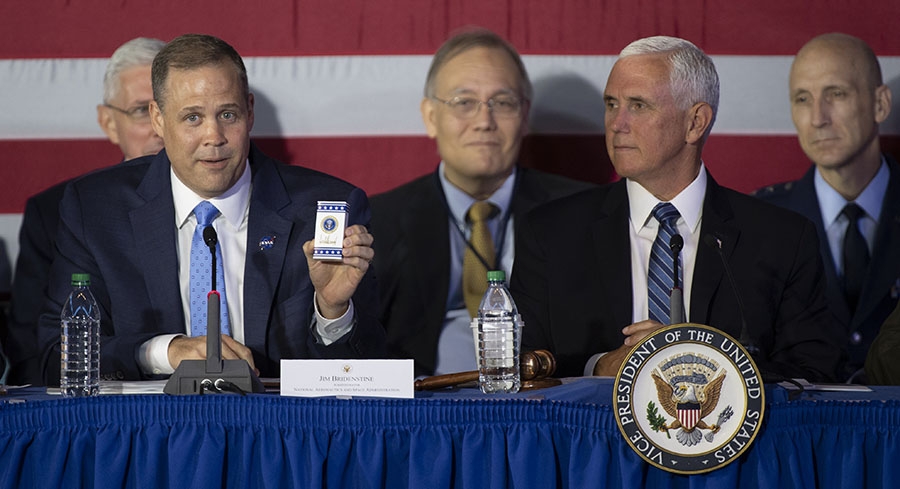 NASA Administrator Jim Bridenstine, left, presents a custom White House box of M&Ms to Vice President Mike Pence as a sign of his appreciation for President Trump’s interest in sending a crewed mission to Mars even as NASA pursues the administration’s more immediate goal of returning astronauts to the Moon.

NASA has consistently indicated that it expects international and commercial partnerships will help unify and reinforce the viability of its Moon-to-Mars plans. Accordingly, in addition to producing a lunar exploration plan, the council recommended that NASA report back on “potential lunar resources” and that it make lunar surface operations its “top priority for international cooperation.”

Meanwhile, in its Moon-Mars Development Strategy, the council expects to tie together a variety of distinct elements, including “low-Earth orbit commercialization, robotic and human exploration, national security capabilities, and international cooperation for science, safety, security, and economic growth.”

Ultimately, though, NASA will have to allocate effort between its ambitions for the Moon and Mars. Bridenstine alluded to this tension in his concluding remarks at the council meeting, noting the presence of Neal on stage as well as Mars exploration advocate Chris Carberry in the audience. He said,

And I will tell you a couple years ago, you put those two in the same room, it was not going to be a pretty sight. But now we’ve got this new direction, Moon and Mars. And now when they come and visit me, they come together, which I never thought I’d see. But it’s a thrilling thing for our nation, to see the unity between these two gentlemen.

“But it’s still not that pretty,” Neal chimed in.