White House Looks to Bolster ‘American Values’ in US Research

The White House Office of Science and Technology Policy is seeking input on a wide-ranging initiative to improve the conditions under which science is conducted in the U.S., stressing a need to reinforce “American values” across the research enterprise. 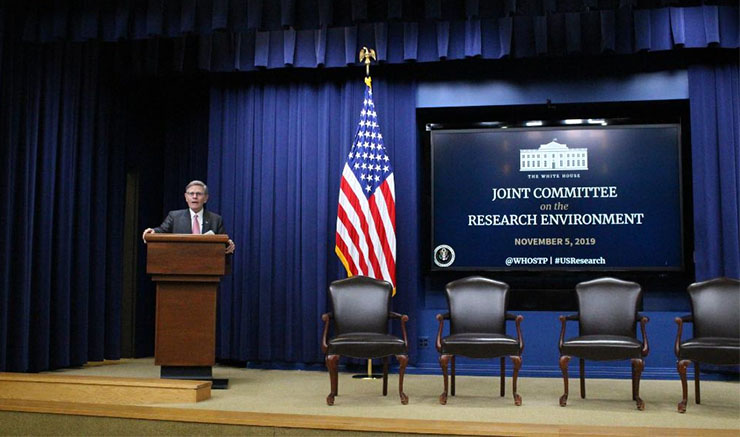 The White House Office of Science and Technology Policy issued a request for information (RFI) last week as part of a sweeping effort to reassess policies that affect research conditions in the U.S. The notice seeks input on how federal agencies should address a set of high-priority issues in science, such as combating harassment, increasing the reproducibility of research results, and securing the U.S. research system against exploitation by foreign governments.

The Trump administration is coordinating the effort through the Joint Committee on the Research Environment (JCORE), an interagency panel that OSTP established in May. JCORE held a summit of research community leaders at the White House in early November as part of its outreach process, and OSTP staff have been holding meetings with faculty at universities across the country. In a series of speeches on the initiative, OSTP Director Kelvin Droegemeier has stressed that he regards JCORE as undertaking a holistic effort to reinforce “values” that he says undergird the U.S. research system.

Outlining what it means to anchor research in American values, the RFI states JCORE is focused on “ensuring that the research environment is welcoming to all individuals and enables them to work safely, efficiently, ethically, and with mutual respect, consistent with the values of free inquiry, competition, openness, and fairness.”

Elaborating on the concept in a section on promoting inclusive research environments, the RFI explains, “The aim is to foster an American research enterprise which epitomizes our values and those of research itself, namely, where researchers feel welcome and are encouraged to join, wish to remain, and subsequently thrive.” Several of the corresponding questions it asks pertain to how institutions should handle claims of harassment as well as what the best practices are for protecting those who report harassment from retaliation and reintegrating individuals who are falsely accused.

In a section on research rigor and integrity, the RFI cites recent National Academies reports on research misconduct and reproducibility and replicability as foundational studies. It seeks guidance on how to ensure researchers are aware of relevant “ethical principles” and how to improve the reporting of research results, such as by changing incentive structures to encourage publication of study limitations and null findings and to promote research that is more easily “reproduced, replicated, or generalized.”

A research security section reiterates points from an open letter issued by Droegemeier in September, stating that “some nations have exhibited increasingly sophisticated efforts to exploit, influence, [and undermine] our research activities and environments.” It identifies participation in talent recruitment programs sponsored by foreign governments as a particular source of concern due to the potential for “breaches of research ethics,” including failures to disclose foreign sources of support and conflicting financial interests.

On this subject, the RFI asks specific questions about what types of connections researchers should be required to disclose as well as broader ones, such as how research organizations can “measure and balance the benefits and risks associated with international research cooperation.”

A section on coordinating administrative requirements contains related questions, asking about the “appropriate balance between reporting and administrative requirements and the potential risk of unreported or managed financial conflicts that could compromise the research.” It also seeks input on the benefits and challenges associated with establishing a government-wide policy for financial conflicts of interest.

While the White House has become increasingly engaged with these topics over the past year, Congress has independently pursued several of them, particularly research security.

For instance, a Senate investigations subcommittee released a bipartisan report on Nov. 18 that criticizes federal science agencies for being slow to grasp how recruitment programs sponsored by the Chinese government can encourage participants to misappropriate U.S.-funded research.

The report includes 14 recommendations, which range from harmonizing disclosure requirements for foreign research support to reassessing “whether openly sharing some types of fundamental research is in the nation’s interest.” At a hearing on the report, Subcommittee Chair Rob Portman (R-OH) said he plans to pursue follow-on legislation and floated the idea of requiring federal agencies to standardize their grant applications as a way of improving disclosure.

In his prepared remarks for the White House summit last month, Droegemeier elaborated on his conception of American values as a lynchpin of the U.S. research system, dividing them into two categories.

“One is the values of our nation, which are extremely important, and where reciprocity is an important word. It means those who come to America from other countries to do research, and who are given the freedom to visit American facilities and move about freely to perform their work, reciprocate when those from America visit their own countries to perform research,” he began.

Continuing, he said, “But as you think about our R&D enterprise, there exists another set of values — and those are the values that we, as researchers, sign on to when we participate in the research. This includes values of integrity and honesty and openness, values of mutual respect, transparency, and accountability to taxpayers in how we spend their dollars.”

Contrasting the two value sets, he added, “Individual researchers operate with integrity when they know and follow the rules of the road. The integrity and the behavior of nation-states is fundamentally different, however.” Without naming particular countries, he stated, “Unfortunately, some other nations do not share America’s values, nor do the values of those nations align with the values of individual researchers.”

Conversely, he specifically identified Australia, Canada, the U.K., and Germany as examples of countries that “share our values.” Citing conversations with science ministers from these countries, he said they are also “thinking in terms of research security,” but added they are “intrigued” by the cross-cutting approach JCORE is pursuing.

Droegemeier said JCORE does not have a specific timetable for action, but noted he expected it will produce significant outputs in the coming months.

Future of US-China collaborations in the balance

Of JCORE’s four subcommittees, the one addressing research security has so far attracted the most attention, given widespread uncertainty about how government policy will unfold and the potential implications for international collaborations, particularly with China.

Droegemeier addressed the subject at the November meeting of the National Science Board, acknowledging there is a pressing desire for guidance about what types of collaborations are acceptable. He remarked,

I've had people, including top-line presidents of our major universities, say to me, ‘Hey, I got a call from a friend in China who I've collaborated with before, and they want to collaborate with me again, and I don't know what to tell them.’ And so there's a lot of dust still in the air, and not much of it is settled yet.

Droegemeier elaborated on how he regards research values as specifically relevant to research competition with China at an event on Nov. 12 convened by Rice University physics professor Neal Lane, who led OSTP during the latter half of the Clinton administration.

“We have to make sure that we are bringing the best and brightest to America who want to come and study here and stay here, as the president said, and also make sure that they play by the rules as researchers,” Droegemeier remarked. “That I think is a much easier thing for them [to do] rather than have China give reciprocity, which I don't think they have any plan to do.”

Lane pressed Droegemeier to say more on the subject, observing, “Statements that are made by the administration and actions being taken are frightening to many foreign-born students and members of the faculty, Chinese Americans, because it's not entirely clear where it's going.” He added, “Often the people who are making these decisions in some of our agencies of government that are not really science-central are not scientists. And the distinction between research collaboration, the give and take, the value to America, as opposed to giving away all our secrets, is not so clear.”

Droegemeier replied that the representatives of security agencies participating in JCORE are not advocating for hardline approaches. “They're not all just saying, ‘Okay, let's close the borders. Let's lock it all down.’ They understand the importance of having a balance,” he said.