The American Geophysical Union has revised its position statement on climate change to declare that the situation represents a “crisis.” It has also submitted input to the House Climate Crisis Committee, which plans to make legislative recommendations this spring. 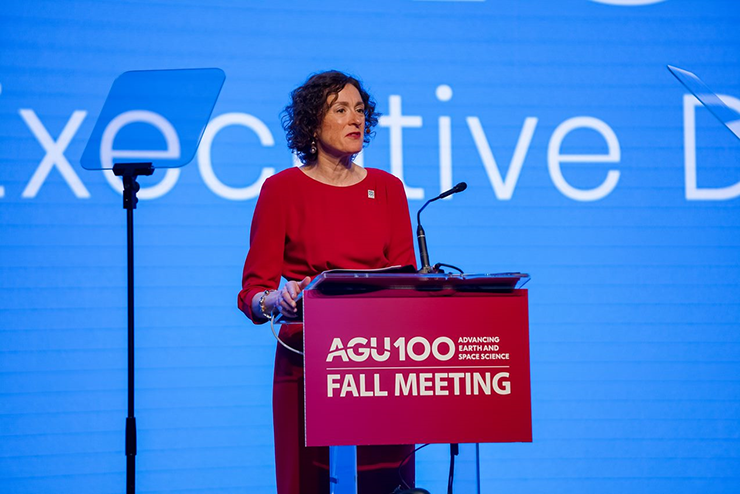 At its fall meeting last month, the American Geophysical Union released an updated position statement on climate change titled, “Society Must Address the Growing Climate Crisis Now.” Explaining the adoption of the increasingly prevalent “climate crisis” terminology, AGU CEO Chris McEntee said at a media event, “We deliberately called it a crisis because we are at a stage at which the future of the biosphere and our species will be determined. It is a turning point.”

AGU also recently responded to the request for information issued by the House Select Committee on the Climate Crisis, which is planning to release legislative recommendations this spring. The response covers a range of subjects, including climate research at federal agencies, geoengineering, and U.S. participation in global efforts to confront climate change.

AGU’s position statement was drafted by a 15 person panel before it was opened to comment by the society’s approximately 60,000 members and subsequently approved by AGU’s board of directors. AGU last issued a version of the statement in 2013, in which it said climate change “requires urgent action.”

The latest statement reiterates many points made in previous versions concerning the science of climate change and its harmful impacts on society. It also newly focuses on the Paris Agreement goals of keeping global warming at least below 2 degrees Celsius and aiming for a 1.5 degrees Celsius limit. “Either target will require a substantial near-term transition to carbon-neutral energy sources, adoption of more carbon-efficient food systems and land use practices, and enhanced removal of CO2 from the atmosphere through a combination of ecological and technological approaches,” AGU states.

Beyond calling climate change a “crisis,” the statement offers a more specific call to action, addressing “individuals, communities, businesses, governments, acting at local, regional, national, and global scales.” It also newly broaches the prospect of using geoengineering methods such as solar radiation management, stating they “require cautious consideration of risks” and cannot “substitute for deep cuts in emissions or the need for adaptation.” And the statement calls on scientific institutions and government agencies to “expand and prioritize their support for research, application, and knowledge dissemination.”

Concerning the research community, the statement elaborates on earlier language describing its responsibilities to communicate information to stakeholders, declaring, “Scientists and engineers must engage with policy makers, communities, businesses, and the public to undertake solution-oriented research and analysis.”

McEntee reinforced that message at the AGU meeting, remarking, “In addition to needed actions by governments at all levels, and corporations, all of us need to work together to collaborate and develop solutions that will enable smart choices for us to be able to meet this crisis and address it.”

Bloomberg and Brown’s conversation revolved around the “America’s Pledge” initiative they are leading through Bloomberg’s philanthropic organization. The initiative focuses on catalyzing efforts by states, cities, and businesses to reduce greenhouse gas emissions in view of President Trump's decision to withdraw the U.S. from the Paris Agreement.

Asked by McEntee about what roles scientists should play in addressing climate change, Bloomberg suggested they use the “bully pulpit” to encourage policy action. He remarked, “The power of this organization is partly the science. But I think the ability to lead the country, given you have credibility that nobody else has, is an obligation you have, and that would be a great contribution if you do it.”

Brown made the case for increasing the intensity of research related to climate and energy, saying the U.S. should spend more to compete with China’s investments in these areas. “I think scientists have to get the word to the politicians that the lifeblood of our future is new knowledge and the kind of research that you all do. ... There are far more programs that are worthy of funding that are not getting funding,” he said.

AGU is also among the organizations that have replied to a request for information released by the House Select Committee on the Climate Crisis in October seeking advice on policies contributing to climate change mitigation, resilience, and adaptation.

In its response, AGU highlights building efficiency as an important area for investment and described steps it took during a recent renovation to achieve “net zero energy” at its headquarters building. It also suggests ways to augment the government’s National Climate Assessment, including by ensuring the models it uses extend several decades and that stakeholders can easily make use of the final product. AGU also states the assessment should “never be allowed to be subject to the whims of political interference or be kept from the public.”

More broadly, AGU recommends increases in federal support for climate change-related research as well as directions for additional investment. These include enhancing capabilities for projecting climate consequences at a local scale and expanding federal climate research centers to operate on an interagency basis. The response also highlights the more detailed recommendations in AGU’s recent report on flooding resilience.

Further, AGU elaborates on its position on climate intervention, stating it encourages research on both removing carbon dioxide from the atmosphere and modifying the Earth’s albedo to reflect more solar radiation. It states that while “legitimate concerns about scalability and side effects” of carbon dioxide removal and albedo modification have blocked funding for research, publicly funded programs in these areas are “essential to ensuring transparency and an adequate coverage and level of research support.” AGU also registers concern that scientific discussions about albedo modification are largely limited to a “small number of western countries” and calls for a “broader dialogue” that engages the public.

Finally, the reply urges the U.S. to collaborate with other countries to address climate change and rejoin the Paris Agreement.

Democrats established the Climate Crisis Committee one year ago after they took control of the House. Although it has no direct power over legislation, it is expected to produce a set of legislative recommendations this March. The House Energy and Commerce Committee plans to release draft climate legislation by the end of this month, and today it unveiled a "framework" document. Meanwhile, the House Science Committee has already approved a bundle of clean energy innovation bills and is holding a hearing next week that will provide “an update on the climate crisis.”

Although any aggressive climate policy legislation has little chance of becoming law in the near term, the Democrats’ proposals are central to their efforts to cast themselves as at the forefront of the issue. Last month, House Speaker Nancy Pelosi (D-CA) led a contingent of Democratic representatives to the 2019 United Nations Framework Convention on Climate Change meeting in Madrid to dissent from the Trump administration’s pullback from international obligations on climate. “Our delegation is here to send a message that Congress’ commitment to take action on the climate crisis is iron clad,” Pelosi said.

Meanwhile, a number of Republicans in and outside Congress have increasingly sought to signal their interest in the subject. In December, Republican members of the Energy and Commerce Committee held an energy innovation showcase to highlight their support for 12 mostly bipartisan energy bills. Committee Ranking Member Greg Walden (R-OR) said that in backing the bills the members “wanted to come forward with some ones we’ve vetted that we think make good common sense and actually could become law.”