The Department of Energy’s Office of Science has established the position of principal deputy director, which oversees a set of new offices focused on policy priorities such as crosscutting research, accelerator technology development, diversity and inclusion, and research security. 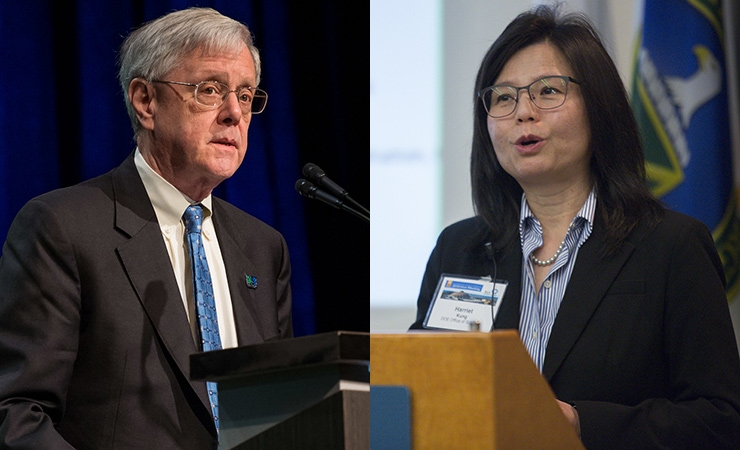 Reporting to the principal deputy director are a set of new offices focused on policy priorities such as crosscutting research, accelerator technology development, diversity and inclusion, and research security. The reorganization will not substantially affect the office’s science programs or the administration of national laboratories.

Before taking on his new role, Steve Binkley had been serving as deputy director for science programs since 2016 and was also the Office of Science’s acting director from the beginning of the Trump administration until the Senate confirmed Chris Fall as director last year. Binkley holds a doctorate in chemistry and previously led the office’s Advanced Scientific Computing Research program from 2013 to 2016 and has also held senior positions at the Department of Homeland Security and Sandia National Laboratories. 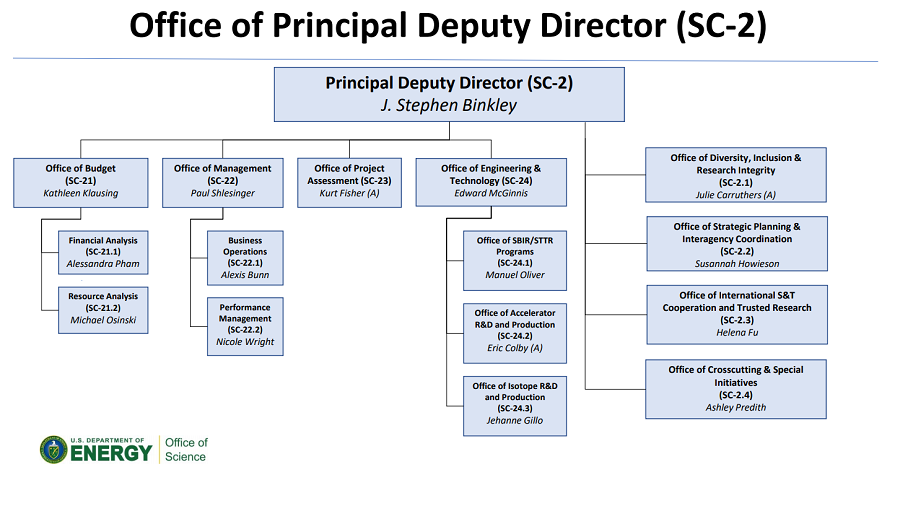 The newly created offices under the principal deputy director largely encompass existing activities. According to a DOE spokesperson, the establishment of dedicated offices for those efforts reflects the importance the department ascribes to them but does not necessarily mean there will be any major associated changes in staffing levels.

The Office of Crosscutting and Special Initiatives is responsible for coordinating the expanding array of focused efforts the Office of Science is undertaking in areas such as quantum information science, artificial intelligence, microelectronics, and biosecurity. It is led by Ashley Predith, who previously worked in the Office of Science as a senior advisor on emerging biosciences and their convergence with physical and computational sciences and national security.

A separate Office of Engineering and Technology oversees DOE’s existing small business innovation and technology transfer (SBIR/STTR) programs as well as two offices that will respectively house the department’s Isotope Program and a centralized accelerator R&D program. The office is led by Ed McGinnis, who is also executive director of the President’s Council of Advisors on Science and Technology. Previously, he was a senior staff member in the DOE Office of Nuclear Energy and for a time served as its acting head.

DOE’s Isotope Program, previously housed within the Office of Science’s Nuclear Physics program, is responsible for DOE’s mission to produce and sell isotopes for a variety of scientific, medical, and industrial applications. The program has recently increased its focus on supporting isotope production R&D and workforce development, and it will continue to be led by Jehanne Gillo.

According to the spokesperson, the accelerator R&D office has been established in recognition of the role accelerators play across various Office of Science programs and it will focus on such technologies as next-generation magnets, control systems, and high-power lasers. The office’s acting head is Eric Colby, who leads accelerator stewardship activities in the High Energy Physics program.

The Strategic Planning and Interagency Coordination office will oversee the Office of Science’s interactions with the White House and other federal agencies as well as lead the development of a new Office of Science strategic plan, which the spokesperson said is targeted for release this fall. The office is led by Susannah Howieson, who was previously a fellow in the office of Rep. Bill Foster (D-IL), and, before that, a staff member at the Science and Technology Policy Institute, which performs policy analyses for the White House and federal agencies.

The Office of Diversity, Inclusion, and Research Integrity is being led in an acting capacity by Julie Carruthers, who has been in charge of the Office of Science’s ongoing efforts to improve its performance on diversity, equity, and inclusion in its grant-making and at the national labs. The office will also oversee application of DOE’s scientific integrity policy.

The Office of International Science and Technology Cooperation and Trusted Research will coordinate activities surrounding multinational agreements as well as the numerous international collaborative activities supported through Office of Science facilities and grants. In addition, the office will focus on policies DOE has been developing to guard against the misappropriation of research by rival governments such as China’s. The office is led by Helena Fu, who has been on detail to the White House Office of Science and Technology Policy, where she worked on research security issues. Before that, she was a senior DOE staff member at the U.S. Embassy in Beijing. 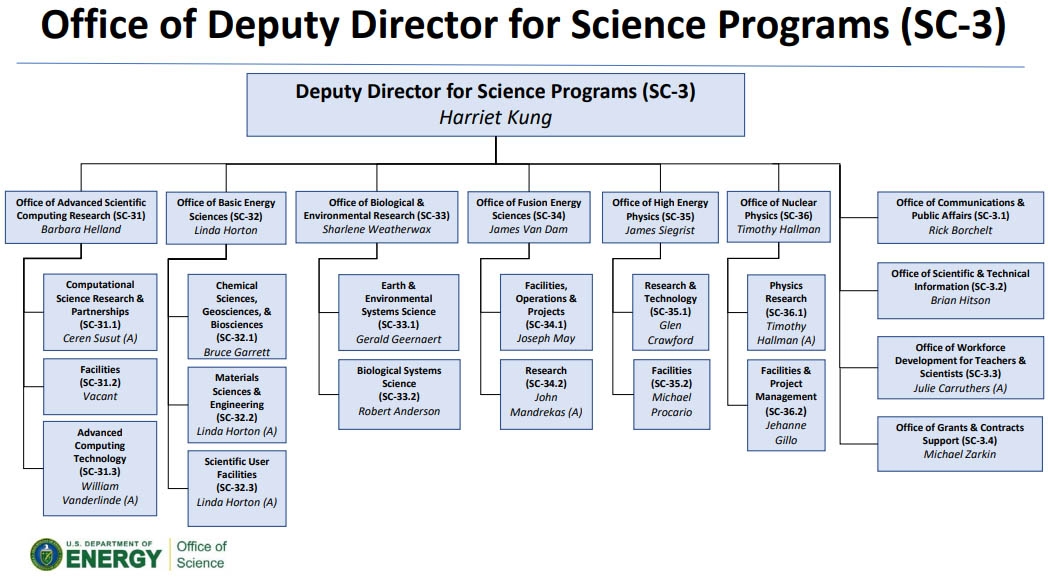 Kung, who holds a doctorate in materials science and engineering, had led the Basic Energy Sciences (BES) program since 2008, and previously led the BES Materials Science and Engineering Division. Prior to her arrival at DOE in 2002, she worked at Los Alamos National Laboratory.

BES is now led by Linda Horton, who will also temporarily continue on in her previous job as head of the Materials Science and Engineering Division. Before taking on that role in 2009, she was director of the Center for Nanophase Materials Sciences at Oak Ridge National Lab, where she had worked since 1981.

With a budget of more than $2 billion, BES is the largest of the Office of Science’s programs. It oversees DOE’s fleet of x-ray and neutron source user facilities, its five Nanoscale Science Research Centers, two Energy Innovation Hubs, and the Energy Frontier Research Center program, as well as an expansive research portfolio.