In the weeks ahead, President-elect Joe Biden will settle on selections for important executive branch science policy positions, while his transition team lays groundwork for his administration to tackle pressing issues at science agencies. 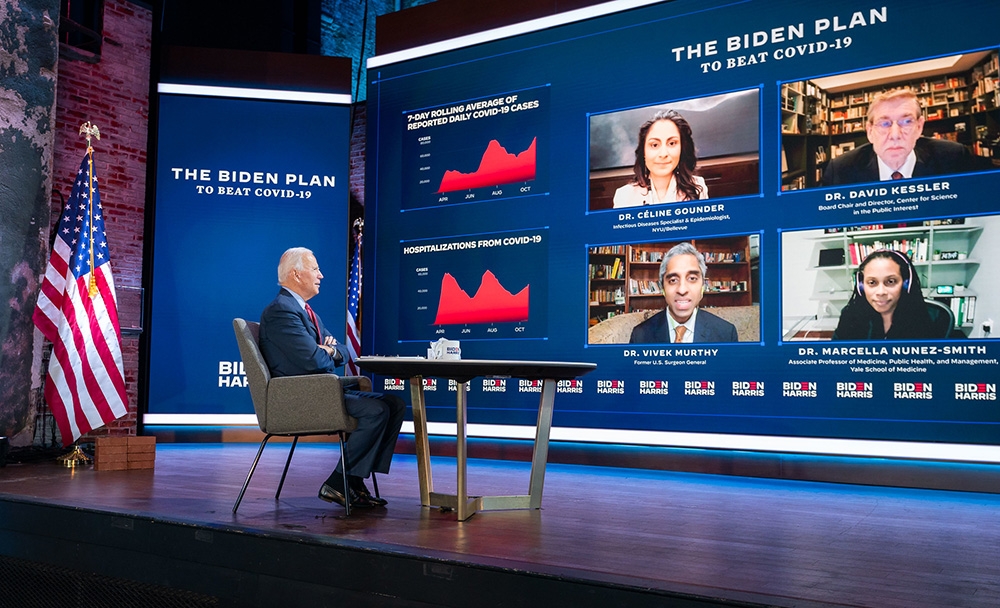 Having secured victory in this week’s election, President-elect Joe Biden will now speed his preparations to take office on Jan. 20. With the country still in the grips of the COVID-19 pandemic, public health and economic recovery efforts will be a top priority as he builds up his transition team and begins to name picks for leadership positions within his administration.

Key elements of Biden’s science policy apparatus can also be expected to fall quickly into place. When he was elected vice president in 2008, President Obama’s transition named several high-level science officials before Inauguration Day. And during the campaign this year, Biden himself has made a point of saying his administration would “choose science over fiction.”

Strengthening science at the White House a priority

As Biden’s transition team shifts to a higher gear, it will start laying groundwork for his administration by helping him choose who to pick for top positions and identify issues requiring immediate attention. Their work will take place largely out of public view, with updates posted on the transition’s official website.

Assembling Biden’s White House staff will be an important first step. On Monday, Biden plans to announce a 12 person pandemic task force to be co-chaired by former Surgeon General Vivek Murthy, former Food and Drug Administration Commissioner David Kessler, and Yale University internal medicine professor Marcella Nunez-Smith. His team will ultimately also work with at least some of the top public health officials involved with current response efforts. Biden has said one of his first moves after winning the election would be to seek the continued help of Anthony Fauci, director of the National Institute of Allergy and Infectious Diseases, whose role has waned as the Trump administration has downplayed the need for actions other than vaccine development.

Biden’s effort is expected to involve stronger federal-level pushes on testing, medical and protective equipment, public health guidance, and economic assistance, as well as vaccine development. He has also indicated he will reinstate routine public pandemic briefings to be run by non-political officials and reverse the Trump administration’s withdrawal from the World Health Organization.

Biden also plans to focus on broader policy issues requiring the intensive contribution of technical expertise. To strengthen preparedness for future pandemics, he has promised to reconstitute the Global Health Security and Biodefense directorate within the National Security Council. In addition, climate change is expected to be a major policy priority. The transition team has reportedly considered appointing a high-profile climate “czar” to manage efforts such as rejoining the Paris agreement, which the U.S. officially left this week. Considerable effort will also be required to restart progress on the regulatory elements of climate policy, while the most significant policy initiatives Biden is envisioning would require intensive work with Congress.

Another important question is what role the White House Office of Science and Technology Policy will play under Biden. Under President Trump, the office has kept a low profile, working on a portfolio of issues that has been mostly separate from the mainstream of White House policy-making. Conversely, this spring Biden floated the idea of elevating the office’s director to a Cabinet-level job, though it is not clear whether that prospect is still on the table. In any event, the director may well be selected during the transition and will likely hold the parallel title of assistant to the president, ensuring direct access to Biden as an advisor. President Obama announced his science advisor on Dec. 20, alongside two outside co-chairs of the President’s Council of Advisors on Science and Technology.

Biden is likely to start announcing nominees for Cabinet-level officials within weeks, though many of his picks for lower-tier Senate-confirmed jobs may not be announced until months following his inauguration. With the Senate under Republican control (pending runoff elections in Georgia), confirmation of Biden’s picks could face major holdups, even though science agency nominations are often uncontroversial. A number of President Obama’s science nominees failed to receive votes for reasons apparently unrelated to their qualifications, especially later in his presidency.

During his transition, Biden will also dispatch “agency review teams” into the federal government to prepare for his administration to take over leadership. Among their tasks will be to help prepare for Biden’s first budget request, which is due for release shortly after he takes office. The teams will also work to identify options for immediate executive attention, such as orders and pending regulatory actions that Biden’s administration will wish to withdraw.

For science agencies, leadership appointments and immediate issues at play vary on a case-by-case basis:

Department of Energy. DOE will play a central role in Biden’s plans to advance technologies that can help slash U.S. carbon emissions. One choice he faces is whether he will follow Obama’s lead in picking a scientist as energy secretary or turn to someone with a political background as had previously been more typical. Across the department, Biden will eventually choose nominees for more than twenty positions requiring Senate confirmation, including the heads of DOE’s applied energy offices, the Office of Science, Advanced Research Projects Agency–Energy, and National Nuclear Security Administration. Although previous NNSA heads have stayed on into new administrations, Lisa Gordon-Hagerty resigned yesterday, reportedly due to ongoing disputes with Energy Secretary Dan Brouillette.

National Oceanic and Atmospheric Administration. NOAA has been led in an acting capacity for the entire four years of the Trump administration, first by former Navy chief oceanographer Timothy Gallaudet and now former Panasonic chief atmospheric scientist Neil Jacobs. Biden is likely to nominate an administrator whose background reflects his focus on climate change, and his administration is apt to replace two scientists recently appointed to leadership positions at the agency who question the severity of global warming. Currently, NOAA and other science agencies are gearing up for the next quadrennial National Climate Assessment, and there have been fears the Trump administration would try to tilt it away from the scientific consensus. However, the assessment director the administration has just picked is regarded as a qualified mainstream scientist.

NASA. Although Trump’s NASA administrator, former Republican congressman Jim Bridenstine, is well regarded, Biden is generally expected to make his own pick, and he may decide to choose a woman to lead the agency for the first time in its history, as suggested by Obama’s administrator, Charles Bolden. Biden is likely to push back the Trump administration’s aggressive goal of returning astronauts to the lunar surface by 2024, but a complete abandonment of the Moon may be less likely as plans are now well along and it would add to the policy whiplash NASA has endured through successive presidential administrations. Biden will also decide whether to keep the National Space Council, a body chaired by the vice president that Trump established to develop a government-wide approach to space policy that integrates exploration, science, defense, and commercial activities.

National Science Foundation. NSF directors are selected for six-year terms and do not typically change over with a new administration. Notably, the previous director France Córdova was one of only a handful of agency leaders appointed by Obama whom Trump kept on, and she stayed until her term expired earlier this year. Trump’s pick to succeed her, Sethuraman Panchanathan, the former chief research and innovation officer at Arizona State University, was an uncontroversial selection and he too is likely to remain in place. Biden will have an opportunity to fill the agency’s deputy director position, the only other Senate-confirmed role at the agency, which has been vacant since 2014.

National Institutes of Health. NIH has been led by geneticist Francis Collins since Obama appointed him in 2009, and Trump retained him even though the position typically does turn over with a new president. Collins has been involved with some pandemic-related controversies, such as the revocation of an NIH grant that President Trump ordered terminated because it funded collaborative work with the Wuhan Institute of Virology. However, Collins has been willing to criticize Trump administration actions and, if he retires or Biden decides to choose a new director, he might stay on until his replacement is confirmed.

Environmental Protection Agency. Biden’s pick to lead EPA will have the hefty task of reversing course on the Trump administration’s aggressive deregulatory agenda and unwinding certain actions concerning how the agency uses science. In particular, Trump’s EPA has been planning to implement a new rule by the end of this year that would curtail its use of studies lacking accessible datasets, which would make it harder to justify new regulations and renew old ones. Should the rule be implemented, undoing it would require a lengthier process than if it is left by the wayside.

Department of Defense. Biden is likely to continue DOD’s push to improve engagement with innovative commercial technology companies and more rapidly develop cutting-edge weapons and equipment. These efforts began under the Obama administration and continued under Trump, and Biden’s widely rumored front-runner for defense secretary Michèle Flournoy has advocated that DOD make “big bets” in technology as well as take a leading role in mitigating climate change.