France Córdova Reflects on Her Tenure as NSF Director

France Córdova spoke with FYI about her six years leading the National Science Foundation, including how she handled criticism from lawmakers and the emergence of sexual harassment and research security as top policy concerns. 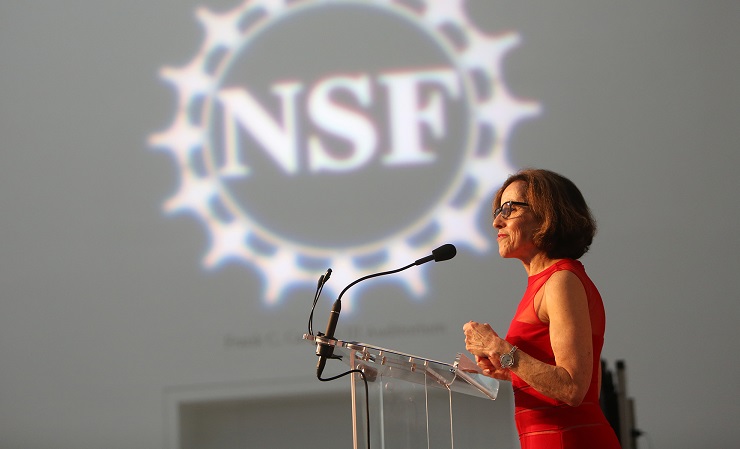 Looking back on her six year term as director of the National Science Foundation, which concluded in March, France Córdova told FYI in a recent interview that she has no regrets.

“I feel extremely lucky on the management side and even more than luck, sort of like divine luck, on the science side,” Córdova remarked. She explained that as an astrophysicist she felt especially fortunate to be leading the agency during a time when long-running NSF investments in her field culminated in breakthrough achievements, such as the detection of gravitational waves and the imaging of a black hole.

Beyond her role championing the science NSF supports, Córdova was also confronted with an array of thorny policy issues during her tenure. In the interview, she described how she approached lawmakers who singled out specific grants for criticism, and how she responded to heightened attention to sexual harassment in science and federal probes of scientists’ ties to China.

Córdova recalled that, early in her term as director, she decided the agency should not be passive in the face of criticisms from Congress. At that time, the agency was under fire from House Science Committee Chair Lamar Smith (R-TX), who advocated adding a “national interest” criterion to the agency’s grant review process. Other lawmakers had also compiled “wastebooks” that called out specific NSF grants as irresponsible uses of taxpayer funds.

One approach the agency took was to begin issuing rebuttals to each wastebook. “We decided not to just turn the other cheek and let it roll off us,” Córdova said. “If you get poked on one thing, then you're just kind of open to being poked on a lot of things — you get into one of these holes where people start suspecting you as an agency.”

She added that NSF also visited with the members of Congress and staff who produced the wastebooks, which she found to be illuminating. “One senator even said, ‘Okay, I now see why this research is justified, but shouldn't this be something that universities are doing?’ And I thought, oh my gosh, he doesn't even realize that that’s what we do, fund universities,” she recalled.

However, she said that trying to stop the wastebooks proved to be a “losing battle,” as individual grants have continued to face criticism. The pressure from Smith ultimately resulted in Congress legislating a tweak to NSF’s grant review criteria in 2016, albeit without adopting his original national interest provision. He continued to press the issue until his retirement in 2018, but it has not resurfaced since then.

Córdova said that in 2016 NSF began developing a strategy for going “on the offense” that ultimately led to the “10 Big Ideas” initiative, which highlighted new crosscutting research priorities. Some scientists were hesitant to embrace the initiative, though, airing concerns about its potential impact on “core” research.

“I think people were just afraid that we would not be funding research that they were already invested in, that they couldn't see clearly where there was a room for them in these 10 Big Ideas,” Córdova recalled.

Ultimately, a string of budget increases enabled NSF to support the Big Ideas without diverting resources, she said. Stressing the importance of securing favorable budgets, she remarked,

When I was just a researcher out there listening to whoever was the current director talk about NSF, I was always amazed that they weren’t talking about science, they were talking about budget. And it wasn't until I became NSF director that I realized that the budget is the strategic plan for the future and you had to get a good budget in order to fund good research.

Alongside other science agencies, NSF has faced mounting pressure from the FBI and Congress to better protect the research it funds against exploitation by rival governments, particularly China's.

The FBI has arrested several scientists who allegedly failed to disclose ties to Chinese institutions, and last year a bipartisan Senate investigation charged that the agency does not have effective policies for preventing participants in Chinese talent recruitment programs from “misappropriating” the research it funds. NSF has since moved to tighten up its requirements that grantees disclose all sources of research support they receive.

At the same time, NSF has faced suspicions within the research community that the disclosure policies are being unfairly enforced. Córdova disputed that characterization, saying the cases she is aware of involving NSF grantees focus on “huge violations” of agency policy.

She did acknowledge, though, that NSF’s disclosure requirements have not been uniformly understood, and noted there is interest in the government providing a grace period for researchers to come into compliance.

”I know some presidents of universities would like to have a period where people could say, ‘Look, I had interpreted my disclosure requirements in a very narrow sense about what was relevant to the particular grant and not my overall funding situation. And I'd now like to disclose the following things.’ But that hasn't been resolved,” she said. Córdova added she personally supports such a move so long as it does not grant amnesty to people who intentionally deceived the agency.

More generally, she said she still believes the conduct of fundamental research should remain largely unrestricted, noting she has long been involved in debates over whether the government should impose tighter controls. She served on the Science and Security in the 21st Century commission in 2002, which focused on security debates in the national lab system, and on the National Academies panel that produced the 2009 report Beyond ‘Fortress America,’ which assessed whether Cold War-era controls remain appropriate. Both reports endorsed the principle that unclassified fundamental research should generally remain free from security controls, as did the recent JASON study that NSF commissioned on the subject.

Córdova said there is a spectrum of views within the government on research security at the moment, though she was reticent to identify who in particular is pushing for new restrictions. “Nobody wants to make things worse by making people mad,” she said. “Washington is a people-to-people place.”

Córdova said she had not anticipated tackling the issue of sexual harassment in science during her time at NSF.

“My personality sort of shies away from that kind of thing because I come out of a generation that just sort of said ‘oh well,’” she said. “We just would turn away from that sort of thing and [think] that there was nothing we could do about it. That's kind of how we felt, just to get on with it and to bury our heads in research and move on.”

She said that a series of news reports revealing cases involving harassment by NSF grantees is what compelled her to act. “It was really just out of frustration about what was going on and just saying ‘enough is enough,’” she recalled.

Initially, Córdova joined with then-NASA Administrator Charles Bolden to issue statements reminding institutions that agencies can revoke funding on harassment grounds, but she later concluded that a campaign to reiterate existing policies would be insufficient.

NSF ultimately adopted a new policy in 2018 that requires grantee institutions to report whenever they conclude key project personnel have committed harassment or if they have placed the personnel on administrative leave pending an investigation, among other actions. Based on the information reported, the agency can then choose to transfer or terminate the grant. NASA has since implemented the same reporting requirements.

Córdova was one of the few officials appointed by President Obama to serve well into the Trump administration. Through both administrations, NSF has had a close relationship with the White House Office of Science and Technology Policy.

Córdova said that Obama’s OSTP director, John Holdren, recommended she take the NSF director job. The current OSTP director, Kelvin Droegemeier, is a former member of NSF’s governing board and was picked to act as NSF director pending the Senate confirmation of Sethuraman Panchanathan, another board member. Concerning why Droegemeier was chosen for the job, Córdova said she was not privy to the White House’s deliberations about the decision but noted there was not another presidential appointee at the agency to fill the role.

Since leaving NSF, Córdova has joined the Science Philanthropy Alliance as a senior advisor. She also has been reviewing former NSF Director Rita Colwell’s forthcoming memoir and is considering writing her own, revisiting a book she drafted on her university career prior to joining NSF. She said she has a passion for writing, noting she was an English major in college and almost chose to pursue a graduate degree in anthropology.

“I really like ethnography. And so I look at the work that I've written as ethnographic, about studying particular cultures, particular places, and times,” she continued. “So I look at the university one that is in draft form as that, and I look at my experience here as that — what does it mean to live in this age, at this time, in this kind of milieu?”