The House is proposing to increase the National Science Foundation’s budget by 3% to $8.5 billion for fiscal year 2021, expanding research and education programs while maintaining level funding for major construction.

This summer, the House passed legislation that would increase the National Science Foundation’s budget in fiscal year 2021 by 3% to $8.5 billion, rejecting the Trump administration’s request for a 6% cut. With the pandemic disrupting this year’s appropriations process, the Senate has not released any of its counterpart spending proposals, including for NSF. 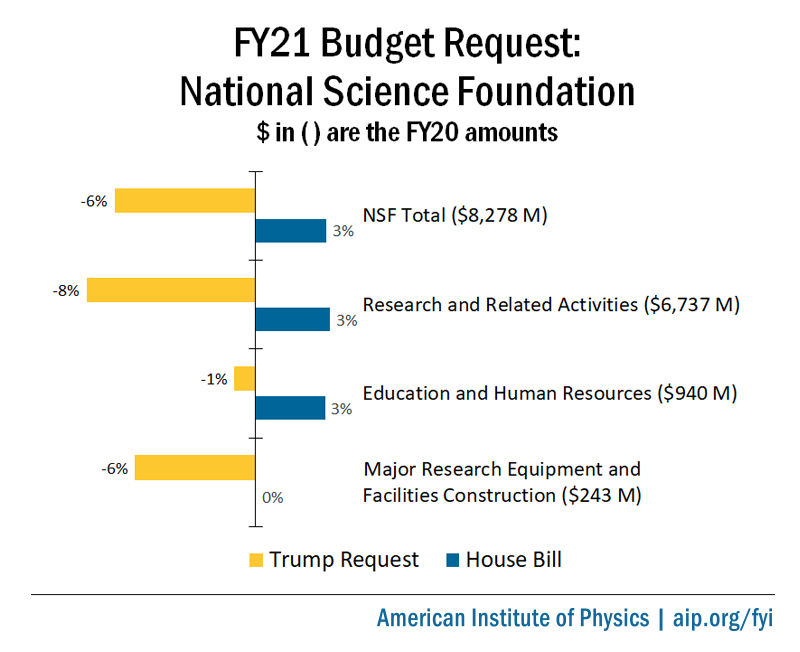 NSF’s Research and Related Activities account funds the agency’s six disciplinary research directorates, which span all fields of fundamental science and engineering except for biomedical research. The House proposes to increase funding for it by 3% to just under $7 billion.

Following tradition, the House does not specify how NSF should allocate funds among its directorates. However, the committee report repeats language from last year directing the agency to fund the Social, Behavioral, and Economic Sciences Directorate at no less than fiscal year 2020 levels, noting, “SBE funds over half of our nation's university-based social and behavioral science research but remains one of the smallest NSF directorates. The committee believes this research provides an evidence-based understanding of the human condition, resulting in more-informed policymaking and better-informed spending on a full range of national issues.”

Big Ideas. Since 2016, NSF has used its “10 Big Ideas” framework to spur interdisciplinary research as a complement to its core research programs. The House report reiterates language from prior years directing NSF to use the Big Ideas as a “focusing tool” and to maintain support for other activities by providing no less than the fiscal year 2020 levels to “existing scientific research, research laboratories, observational networks, and other research infrastructure assets.”

Astronomy. As in prior years, the House report instructs NSF to provide at least level funding to programs and facilities in the Astronomical Sciences Division. The report states that “a critical component of the nation's scientific enterprise is the infrastructure that supports researchers in discovery science, including planetary protection” — a likely reference to the role the Arecibo Observatory in Puerto Rico plays in characterizing near-Earth asteroids. NSF plans to ramp down its support for Arecibo’s operating costs, but has faced resistance from Congress, including the top appropriator for NSF in the House, Rep. José Serrano (D-NY). The report was released before the observatory was significantly damaged this summer by a broken cable.

The report also includes new language expressing support for NSF making “preliminary investments in emerging priority facilities, such as the next-generation Very Large Array and the Extremely Large Telescopes,” while Congress awaits the recommendations of the latest decadal survey for astronomy and astrophysics, due for release next year. Last month, NSF awarded a $17.5 million grant for equipment testbeds for the Giant Magellan Telescope, which is one of two Extremely Large Telescopes seeking long-term support from the agency.

Quantum research. The House report expresses support for NSF’s work to implement the National Quantum Initiative Act, which directs the agency to fund between two and five quantum information science centers, each at up to $10 million annually. In July, NSF announced it will evenly divide $75 million over five years among the first three quantum centers awarded in response to the act. The House report also states NSF should “remain committed to developing and supporting systems that facilitate tremendous leaps in computational simulation, including artificial intelligence, storage, quantum computing, and data analyses that enable a broad range of scientific research.”

Artificial intelligence. The House report recommends NSF spend no less than it did in fiscal year 2020 on AI-related grants and interdisciplinary research initiatives. It also encourages NSF to fund research on algorithmic bias and to conduct focused outreach to community colleges and Minority-Serving Institutions in its workforce development efforts.

HBCU research. The House report directs NSF to report on how research it funds is “contributing to the success” of Historically Black Colleges and Universities. It also encourages NSF to support research on “how HBCUs with diverse academic cultures successfully graduate African American students at a higher rate than other institutions; produce a higher rate of African American STEM students receiving PhDs; and instill in students a greater sense of well-being.” It further proposes a $2 million or 11% increase for the HBCU Excellence in Research program, which works to increase the ability of HBCUs to compete for NSF research grants.

EPSCoR. The Established Program to Stimulate Competitive Research supports projects in states that have historically received a relatively small share of federal grant dollars. The House report directs NSF to increase funding for the program by at least 8% to $205 million. It also observes, “EPSCoR states have many unmet needs including equipment and computing/networking resources, sufficient numbers of researchers, especially at the graduate and post-doctoral levels, and better integration into regular NSF programs, which co-funding can help overcome.” 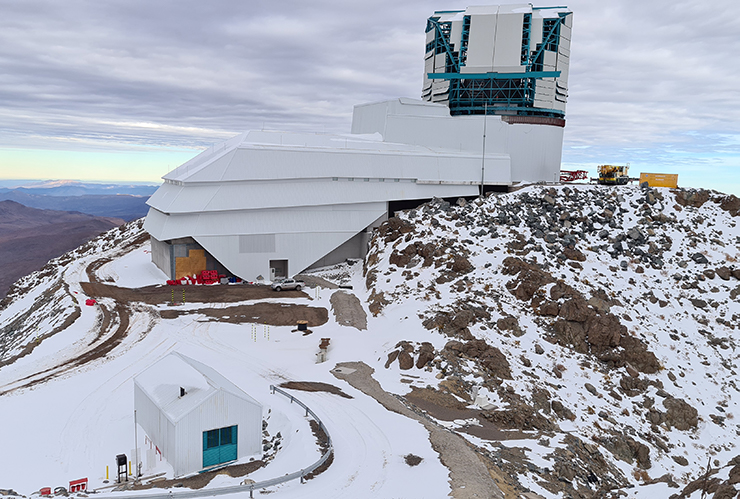 The Vera C. Rubin Observatory photographed in July 2020. The pandemic prevented the construction team from completing the telescope dome before the onset of winter in Chile.

Major facilities. NSF funds large construction projects through its agency-wide Major Research Equipment and Facility Construction (MREFC) account. The House matches NSF’s requested amounts of $33 million for detector upgrades at the Large Hadron Collider in Europe and $41 million to continue construction of the Vera C. Rubin Observatory in Chile. It also provides $98 million for revitalizing infrastructure at the McMurdo research station in Antarctica, $8 million above the request. Since NSF submitted its request in February, the pandemic has significantly disrupted construction on the Rubin Observatory and the Antarctica project, but the agency has not yet released estimates of what the delays might cost.

Infrastructure planning. Repeating language from last year, the House committee states it is “concerned” about the agency’s planning for the next generation of facilities, “including ground-based telescopes.” It continues, “Failure to plan for the next generation of facilities handicaps the U.S. science community and risks our nation's global leadership in science,” and encourages the agency to develop a “comprehensive and prioritized list of large-scale facilities requested by NSF-supported science disciplines.”

Through its Education and Human Resources account, NSF funds research capacity-building efforts at Minority-Serving Institutions, STEM education pedagogy research, and various fellowship programs. The House bill would increase its budget by 3% to $970 million, with much of the additional funding directed toward programs that support groups underrepresented in STEM fields.

The report expresses particular concern about the “severe underrepresentation of Hispanic Ph.D. graduates in the STEM fields” and directs NSF to develop a plan to address the matter. It also notes that NSF does not have a dedicated program for Asian American and Native American Pacific Islander-Serving Institutions and “urges” the agency to increase grant funding opportunities for these groups.