An AIP task force recommends ways to double the number of African American students graduating with physics and astronomy bachelor’s degrees by 2030, including through reforming departmental culture and raising a $50 million endowment to provide financial assistance.

A task force report published this month by the American Institute of Physics offers a framework for addressing the persistent underrepresentation of African Americans in physics and astronomy. It maintains that faculty, academic departments, and professional societies must embrace new ways of approaching the problem in order to bring about the “systemic changes” it argues are needed to make significant progress.

The task force concludes the persistent underrepresentation of African Americans in these fields is due to a lack of supportive environments for these students in many departments and to the "enormous" financial challenges they face. Accordingly, among other recommendations, it calls on academic departments to more proactively cultivate “physics identity” among African Americans and urges professional societies to raise an endowment that would financially support minority students. 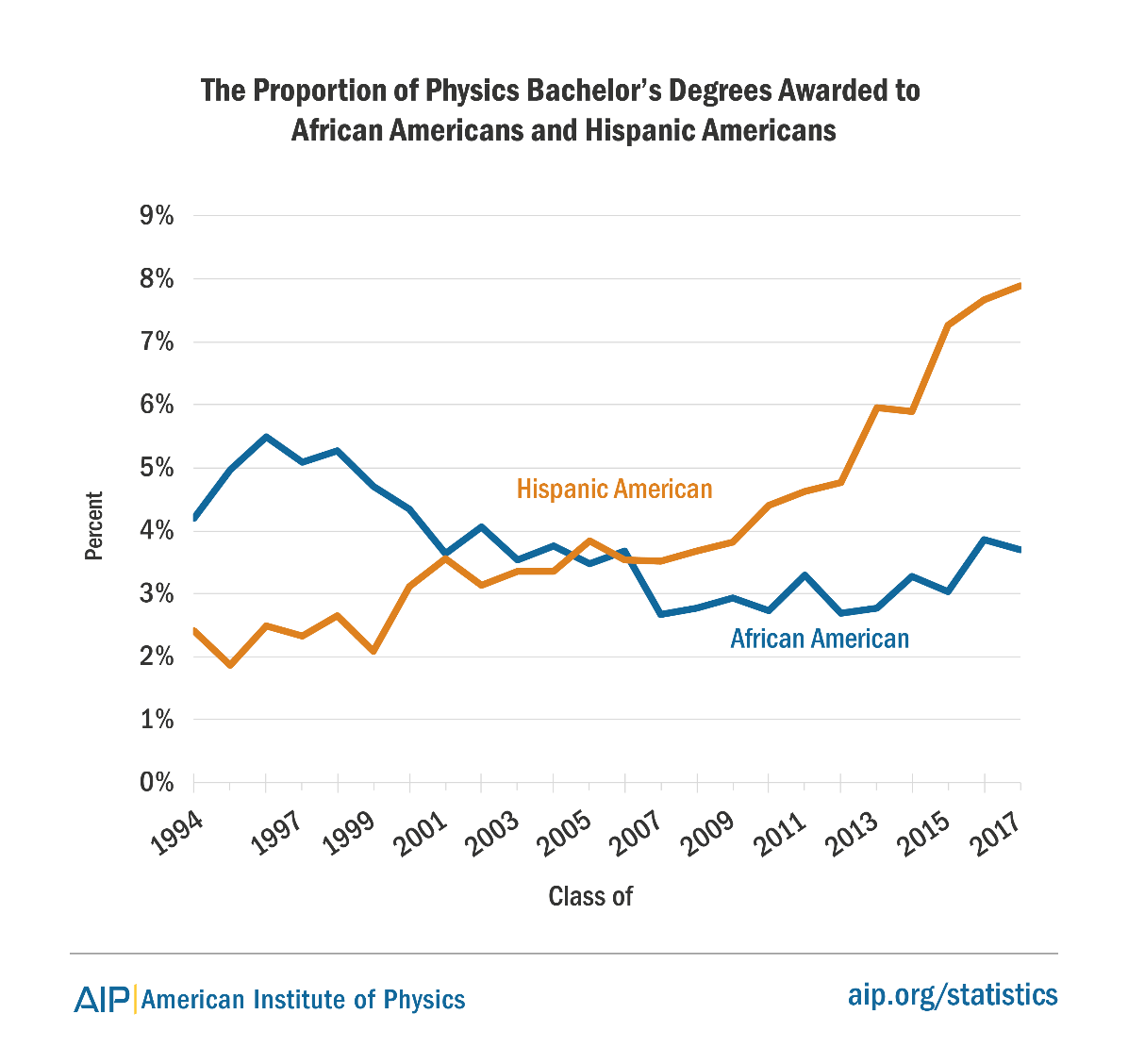 “While there is widespread acknowledgment that physics and astronomy must improve diversity, equity, and inclusion overall, the number and percentage of bachelor’s degrees awarded to African Americans in these fields has been appallingly low,” the task force observes in its report.

To investigate this particular failure to improve diversity, AIP formed a 10 member study panel in 2017 called the National Task Force to Elevate African American representation in Undergraduate Physics and Astronomy (TEAM-UP). The study was co-chaired by Mary James, a physics professor and dean for institutional diversity at Reed College, and Edmund Bertschinger, a physics professor and former equity officer at MIT.

In addition to analyzing the issue, the task force sets the goal of at least doubling the annual number of African Americans who earn bachelor’s degrees in physics and astronomy from the 2017 values of 238 and 12, respectively, to approximately 500 and 25 by 2030.

Their recommendations revolve around five main factors that they identify as contributing to the success of African Americans in these fields: academic support, personal support, leadership structures, physics identity, and belonging.

Stressing the importance of understanding mechanisms behind institutional change, the task force identifies that their “highest priority” recommendation is for stakeholders to study related diversity initiatives, such as the American Physical Society’s report on the climate for LGBT individuals in physics and the American Astronomical Society’s task force on diversity and inclusion in astronomy graduate education.

Based on surveys of students and site visits to five departments, the task force concludes that financial challenges are “one of the greatest difficulties” that face African Americans seeking to study physics or astronomy. They observe that departments that have demonstrated the most success in supporting African American students also face financial challenges themselves.

Accordingly, the task force calls for physical science societies to establish a $50 million endowment dedicated to supporting minority students with financial needs in physics and astronomy. Half of the endowment would directly support African American students and the remainder would support other financially marginalized groups as well as departments’ implementation of the task force’s recommendations.

As an interim step while the endowment is being established, the task force suggests societies raise $1.2 million per year to help relieve the debt burden of African American undergraduate students. The report explains this figure “corresponds to the typical unmet need of $8,000 per year for 150 students, which is the number of additional African American students who should be earning physics bachelor’s degrees at Historically Black Colleges and Universities in order to achieve parity with the growth in physics degrees at Predominantly White Institutions since 1995.”

In parallel with increased financial support, the task force recommends department faculty should ensure their academic support systems recognize students’ capabilities and build on their strengths.

The task force states that academic support too often is “approached from the student deficit model — the idea that minoritized students have, as a consequence of their identity, learning challenges making them less capable than others.” To the contrary, it finds that "African American students have the same drive, motivation, intellect, and capability to obtain physics and astronomy degrees as students of other races and ethnicities.”

The task force encourages departments to adopt policies that encourage faculty of all races to engage in student mentoring. More broadly, it urges department leaders to create incentives for all faculty to foster a supportive environment.

“Lone champions can make a big difference for students, but their effort is unsustainable,” the report states. “In the most successful departments, a significant fraction of the faculty consistently value and support African American students as a part of the department’s culture and established practice.”

The task force stresses the importance of developing students’ sense of “physics identity,” which it defines as “how one sees oneself with respect to physics as a profession.”

It states physics identity is strengthened when there are same-race faculty members to serve as role models and when students are “routinely invited and financially supported to participate in established activities of the profession.”

Relatedly, the task force observes that developing a sense of belonging is important for mitigating phenomena such as stereotype threat, wherein a minority student’s fear of confirming a negative stereotype creates anxiety that harms their performance.

Describing such pressures, one student surveyed by the task force reported “a constant feeling that I am a representative; therefore I must be flawless.”

Among their recommendations for fostering physics identity and belonging, the task force calls on departments to “establish and consistently communicate norms and values of respect and inclusion” and suggests professional societies form a consortium dedicated to addressing “identity-based harassment,” using the recently launched Societies Consortium on Sexual Harassment in STEMM as a model.