Fate of ‘Build Back Better’ Science Funding Pushed Into 2022

The Senate has added $5 billion for Department of Energy research infrastructure projects to the House-passed version of the Build Back Better Act, but the overall bill is in peril after Sen. Joe Manchin (D-WV) declared he could not back it. 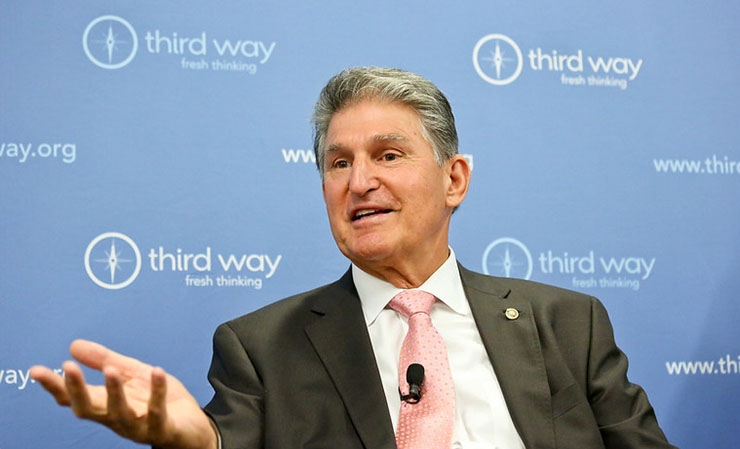 In the last week, the Senate reallocated billions of dollars within the Build Back Better Act to fund Department of Energy research infrastructure projects, even as the overall bill hit a serious impasse. At the center of both developments was Sen. Joe Manchin (D-WV) in his respective roles as chair of the Senate Energy and Natural Resources Committee and the Democratic party’s most outspoken skeptic of the legislation.

Democrats hope to use the bill to fund nearly $2 trillion of the party’s priorities over multiple years, leveraging Congress’ budget reconciliation process to circumvent a Republican filibuster in the Senate. Because the Senate is evenly divided, Democrats must secure unanimous support in their ranks to pass the bill. Manchin has used that fact to put himself at the center of negotiations, but that process is now upended after he declared opposition to the bill on Dec. 19, citing concerns over its fiscal impacts.

In large part to satisfy Manchin, before the House passed its version of the legislation in November it cut the bill’s overall spending topline in half and substantially restructured its clean electricity provisions. In the process, much of the funding originally intended for science programs was left on the cutting-room floor. That Manchin’s committee has restored some of that funding suggests his continued interest in shaping the bill and using it to bolster science.

In its original proposal for the Build Back Better Act, the House Science Committee allocated $45.5 billion across science programs in its jurisdiction, including $11 billion for the National Science Foundation and nearly $13 billion for the DOE Office of Science. In the pared-back version the House passed, those figures were respectively reduced to $3.5 billion and less than $1 billion.

When the Senate then took up the bill for consideration, the Science Committee’s portion was split primarily between the Commerce, Science, and Transportation Committee, which made no further changes, and the Energy and Natural Resources Committee, which made significant changes. Those changes include adding back $5 billion of the more than $10 billion the Science Committee had originally allocated to an array of specific projects and national labs. Drafts of Senate committees’ portions of the bill are posted here. 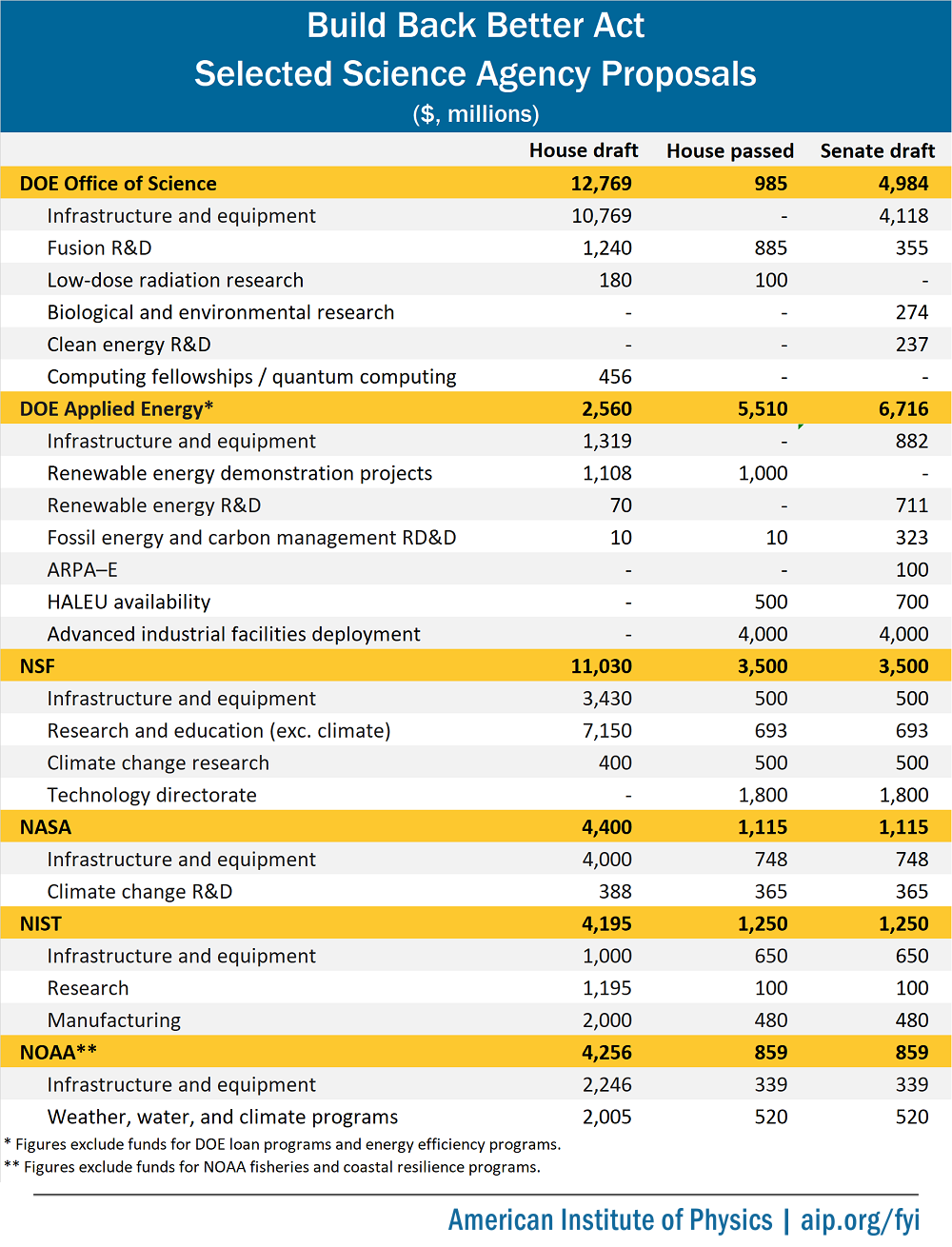 The Energy and Natural Resources Committee is less precise than the Science Committee was in its infrastructure allocations for the DOE Office of Science, specifying:

These funds would enable the office to patch holes in facility budgets across its portfolio and provide advance funding for some projects. For example, the High Energy Physics program would be able to fully fund its contribution to upgrades at CERN’s Large Hadron Collider, which is facing a budget shortfall this year, with money left over to push up the funding profile for the flagship Long-Baseline Neutrino Facility and Deep Underground Neutrino Experiment. Likewise, the Fusion Energy Sciences program could use its portion to catch up on its contributions to the international ITER facility.

The Energy and Natural Resources Committee also reduced and reallocated funds the House-passed bill included for R&D efforts at the DOE Office of Science. Of its $985 million total, the House allocated $885 million to launch a suite of nuclear fusion R&D programs that Congress has authorized but not yet funded. It allocated the remaining $100 million to a low-dose radiation research program that Congress has directed the Office of Science to revive within its Biological and Environmental Research program. By contrast, the Energy and Natural Resources Committee has allocated:

The committee also removed the $1 billion the House bill allocated to renewable energy demonstration projects and instead directs funds to activities across DOE’s applied energy offices, including:

Funds for other science agencies unchanged

In deciding what to keep in the bill when it was trimmed from its original size, Democrats generally prioritized activities related to climate change mitigation, STEM diversity, or marquee initiatives such as the proposed technology directorate at NSF. For science agencies other than DOE, the amounts included in the Senate’s draft version are the same as those in the House-passed bill:

The Senate Judiciary Committee has yet to post a draft of its portion of the bill, through which Democrats hope to enact sweeping immigration policy changes. These include creating a pathway to citizenship for certain undocumented immigrants and a shortcut for legal immigrants to receive green cards. Various scientific organizations have called for Congress to make green cards more readily available, including AIP.

However, the Senate parliamentarian has so far ruled that their proposals relating to undocumented immigrants would violate the strict procedural rules of the reconciliation process, and provisions specific to employment-based immigration may face the same roadblock.

The outlook for the bill as a whole remains murky. Senate Majority Leader Chuck Schumer (D-NY) is vowing to forge ahead despite Manchin’s opposition, saying he will call a vote on the bill early in the new year to put senators on record and then continue “until we get something done.”

For his part, Manchin has said he might return to the table if Democrats subject the bill to a more formal committee process, providing members further opportunities to debate and amend it. If Democratic leaders agree to go that route, it could lead to further changes for science programs down the road.