The National Oceanic and Atmospheric Administration’s Science Advisory Board is aiming to complete a study by year’s end on weather research priorities, which Congress mandated in lieu of a proposed decadal survey for the field. 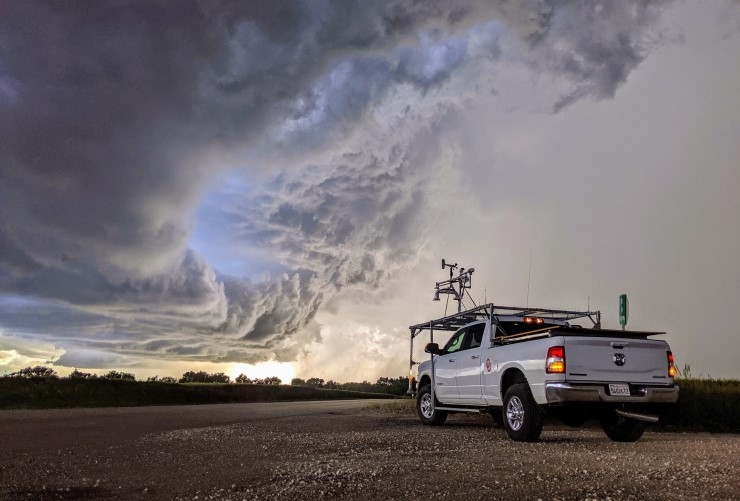 A NOAA researcher prepares to launch balloons into the core of a storm.

This week, the National Oceanic and Atmospheric Administration’s Science Advisory Board (SAB) approved the plan for a new study that will recommend weather research priorities for the next decade. The effort will be led by Brad Colman, director of weather strategy at the Climate Corporation, and Scott Glenn, an oceanography professor at Rutgers University.

Congress mandated the study in its fiscal year 2021 appropriation for NOAA and asked the SAB to complete its work by the end of 2021. In selecting the SAB to lead the effort, Congress decided against adopting a proposal to conduct a “decadal survey” through the National Academies.

Congress has directed that the SAB’s report should provide policymakers with “the relevant information necessary to prioritize investments in weather forecasting, modeling, data assimilation, and supercomputing over the next ten years” and evaluate “future potential federal investments in science, satellites, radars, and other observation technologies.”

Given the breadth of the charge and the quick turnaround required, the SAB formed a scoping team to establish focus areas for the study. The team settled on three “pillars of the weather enterprise” that will be considered by dedicated task groups: observations and data assimilation, forecasting, and information delivery. The charge refers to the areas as representing the “weather information pipeline,” wherein data is ingested into forecasting models that produce guidance and warning products for stakeholders, with feedback loops for evaluating requirements at each stage. The study will consider both experimental and operational capabilities for observations, as well as research and operational needs for forecasting. 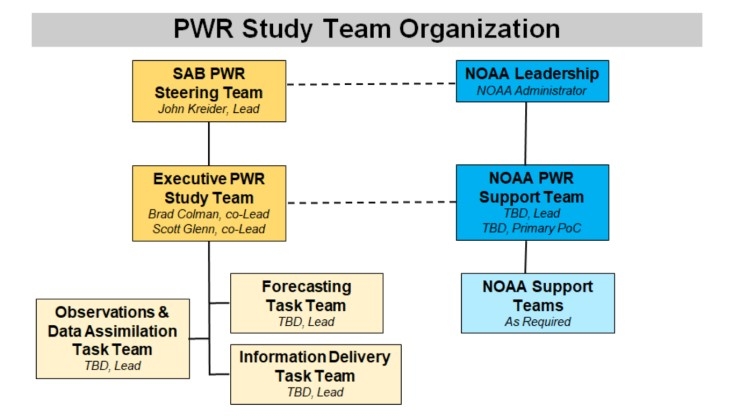 Each of the three task groups will also consider four cross-cutting themes: public-private partnerships, workforce development, computing, and science. The groups will conduct many of their activities in parallel and plan to hold mini-symposia with stakeholders this summer.

Discussing the charge at the SAB’s meeting this week, Glenn said that because of the study’s tight timeline, “it is going to be a very collaborative process and we are going to need help from NOAA.”

SAB Chair John Kreider added that the study team was structured to allow NOAA to support the study while avoiding conflict of interest. He noted the effort is “not supposed to reflect a purely NOAA perspective; it is supposed to be an independent perspective.”

The original idea of conducting the study as a National Academies decadal survey stretches back several years and was under serious consideration for some time, including in the House’s draft appropriations legislation for the current fiscal year. The draft described the effort as the “inaugural decadal survey of the U.S. weather enterprise” and it would also have assessed the implementation of the Weather Research and Forecasting Innovation Act, a major NOAA policy update that Congress enacted in 2017.

However, within NOAA there were concerns about how such a survey would relate to existing agency plans and congressional directives in the weather law.

At this week’s SAB meeting, Acting NOAA Chief Scientist Craig McLean welcomed the approach the board is taking to the study, saying, “We’ve had a lot of Academies studies that tell us what we need, but this is an opportunity for us to be heard.”

Cautioning the board against providing overly prescriptive guidance, he added, “If what we get back is the same kind of annual operating plan that was disguised as the Weather Research and Forecasting Innovation Act, where there is really no latitude to the agency ... that’s not the kind of specificity that really helps this agency.”

Reinforcing this point, Kreider remarked, “It would be really helpful if Congress heard the big issues, because a lot of times they try to dig into the details and, without an overall big strategy or framework, say specifically, ‘do this, do that,’ at a very low level.”