The National Academies has kicked off development of a strategy for the Department of Energy's low-dose radiation research program. DOE terminated the program in 2016 but recently revived it at the behest of Congress. 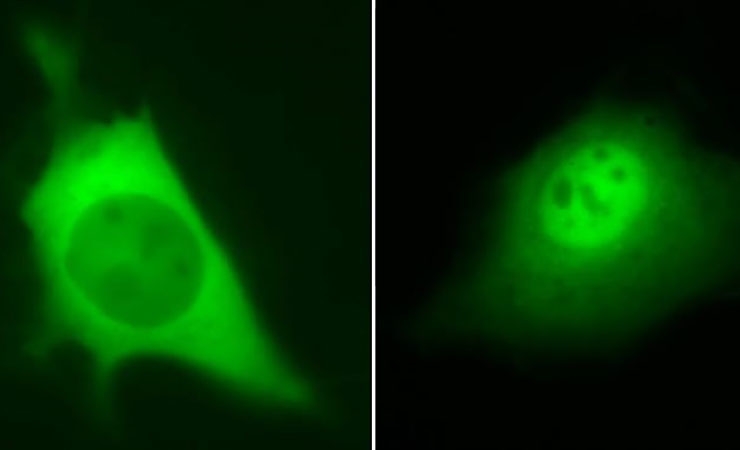 Fluorescence microscopy images depicting how proteins moved into a cell nucleus after irradiiation.

The National Academies held a kickoff meeting last month for a study that will propose a long-term strategy for research on the biological effects of low doses of ionizing radiation. Congress mandated the study through the Energy Act of 2020, which updated a 2018 law directing the Department of Energy to reestablish the low-dose radiation research program it had terminated two years earlier.

Todd Anderson, director of the Biological Systems Science Division in DOE’s Office of Biological and Environmental Research (BER), explained at the meeting that the department ended the program to focus on higher-priority research and offered ideas about how BER facilities could support a revived program. He also expressed reservations about how low-dose radiation research fits into BER’s current portfolio and how it would fare in the long term if it does not have departmental buy-in.

The study committee is chaired by Joe Gray, a cancer researcher and biomedical engineering professor at Oregon Health and Science University. At the meeting, Gray called the committee’s statement of task “meaty,” noting it has been asked to recommend key components for a low-dose research program spanning DOE national laboratories and universities, and to identify opportunities for interagency collaboration. The committee is also directed to identify, and as far as possible quantify, the potential monetary and health-related implications of low-dose research, which informs radiation exposure regulations.

Gray observed that since Congress directed DOE to revive the program, it has provided the department with $5 million annually for its work. He also noted that the Energy Act of 2020 recommends that Congress increase that budget to $40 million annually by fiscal year 2024. House appropriators have proposed BER allocate at least $10 million for low-dose research in fiscal year 2022, while Senate appropriators did not propose a specific amount in their counterpart legislation. BER’s current annual budget is $753 million.

In its first budget request under the Biden administration, DOE did not mention the low-dose program. Discussing the department’s perspective, Anderson stated the “whole reason” the program had been terminated was to free up resources to expand research in bioenergy and environmental processes. He also noted that BER is the department’s hub for climate modeling.

“Those are the topics of the day,” he said.

Prior to the program’s termination, DOE was the federal government’s leading funder of low-dose research. According to a 2017 Government Accountability Office report, seven federal agencies spent a total of $210 million between fiscal years 2012 and 2016 on low-dose research, with DOE contributing $116 million. The National Institutes of Health was the second-largest funder by far, with a total contribution of $89 million.

Gray pressed Anderson on the advisability of reestablishing the program within BER, saying, “Reading between the lines in some of the things that you said, do you think BER is the right place for this program to be housed? Let's put you on the spot.”

“I'd have to say I'm not sure,” Anderson replied, and then added,

When I look at the way that our budget language has been structured, the priorities that have been communicated over the last couple of years, I don't see where low-dose is a priority on the DOE-side. … If Congress puts an entity back into DOE, but there’s no support by DOE or an agency, you’ve got to wonder about the long-term longevity of that program.

Congressional interest in the program has been a sensitive matter for DOE for some time. Five years ago, some Republican members of Congress accused DOE officials of attempting to sabotage legislative efforts to protect the program from termination. Subsequent efforts to revive the program ultimately garnered bipartisan support.

Discussing possible priorities for a revived program, Anderson said BER would like to support basic research that reduces uncertainties concerning the validity of the linear no-threshold (LNT) model, which holds there is a proportional relationship between radiation exposure and health risks, even at low doses where effects are difficult to measure. However, Anderson also observed that BER has “almost zero” role to play in setting radiation exposure limits and suggested the committee examine the role of DOE’s Office of Environment, Health, Safety, and Security.

Much of the data on radiation exposure effects come from studies conducted after high-radiation events, such as the atomic bombings of Hiroshima and Nagasaki during World War II. However, knowledge of cancer risks associated with exposures below 100 millisieverts is ambiguous. For reference, most CT scans entail exposures of less than 10 millisieverts and the limit for maximum annual exposure for radiation workers in the U.S. is 50 millisieverts.

NRC has stated that although studies of workers who are chronically exposed to low doses of radiation above natural background levels “have shown no adverse biological effects,” the agency still “accepts the LNT hypothesis as a conservative model for estimating radiation risk.”

Anderson suggested that the study committee consider opportunities for DOE to collaborate with different agencies that have a stake in radiation protection, including NRC and EPA, as well as NASA, which earlier this summer was advised by a separate National Academies panel to update its radiation exposure limits for astronauts.

Anderson also pointed out that BER has already struck up a partnership with NIH’s National Cancer Institute, using the $5 million Congress provided for low-dose research in fiscal year 2021 to fund development of computational tools to detect cancer signatures in large genomic datasets. He suggested the committee consider how the revived DOE program could leverage sequencing capabilities at the Joint Genome Institute in California, as well as other BER-funded capabilities, such as nuclear magnetic resonance and mass-spectrometry instrumentation at Pacific Northwest National Lab.

The study committee will build on the work of a 2019 National Academies symposium that was organized by Gray and gathered perspectives on potential future directions for low-dose research in the U.S. Representatives from several federal science agencies attended the symposium, though none were from BER.

The symposium report noted that DOE’s program originated from a provision sponsored by Sen. Pete Domenici (R-NM) in the department’s appropriation for fiscal year 1998 that directed DOE to initiate a 10-year program to understand how radiation affects living organisms. It added that Domenici was motivated by a desire to explore the “appropriateness” of the LNT model.

The report also stated that participants in the symposium expressed broad support for re-establishing DOE’s low-dose program, which, it observed “came equally from those who are concerned about the risks at low doses of radiation and those who argue that the risks are currently overestimated and therefore lead to tighter-than-necessary regulations."

Addressing potential research priorities for a revived low-dose program, the report identified opportunities to expand beyond BER’s past emphasis on radiation biology studies. Among potential options it listed were broadening epidemiological studies of workers exposed to radiation and establishing a research consortium of measurement and computational scientists.

However, the report also noted that a future program “has almost exclusively been thought to follow the same model as the previous DOE-managed program.” It suggested that other governance models could also be used, citing among other possibilities, the multi-agency model of the Cancer Genome Atlas, the government-private sector model of the Health Effects Institute, an “internationally coordinated research program,” or some “hybrid” approach.