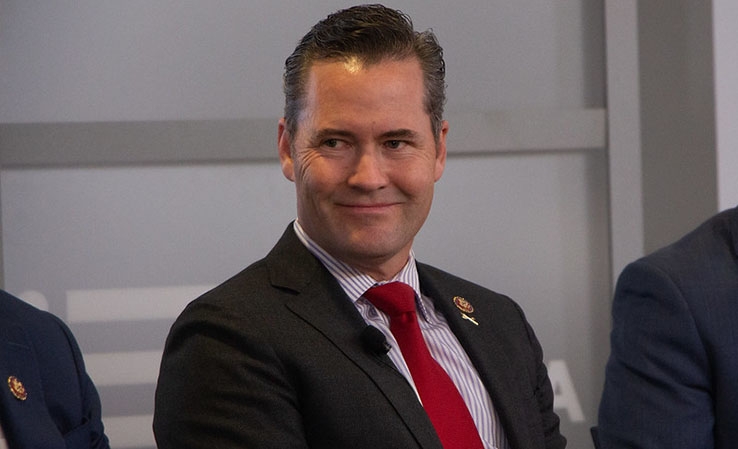 Rep. Michael Waltz (R-FL), a member of the House Science Committee and Armed Services Committee, is the lead sponsor of a provision that would bar federal research grantees from participating in certain foreign talent recruitment programs.

Last week, the House attached a provision to its version of Congress’ annual National Defense Authorization Act (NDAA) that would bar recipients of federal research grants from participating in “malign” talent recruitment programs based in “countries of concern.” The provision identifies China, Russia, Iran, and North Korea as such countries, along with any others the State Department may designate.

The House passed the bill on Sept. 23 and will soon begin to reconcile it with the Senate’s counterpart version, which does not currently contain the provision. However, a more stringent prohibition on participation in foreign talent recruitment programs is included in the U.S. Innovation and Competition Act (USICA), which the Senate has already passed, suggesting such a restriction has enough support to be enacted.

The move to prohibit participation in certain recruitment programs stems from concerns they are conduits for foreign governments to exploit U.S.-funded research and that they operate in ways that are antithetical to the rules and norms of the U.S. research system. In targeting "malign" programs specifically, the House provision defines them as ones that require their participants to transfer intellectual property exclusively to foreign entities, enter employment arrangements that conflict with the terms of federal grants, or recruit more individuals into the program.

Prohibition would build on disclosure provisions

Over the last three years, the NDAA has been Congress’ main vehicle for enacting research security measures. Last year’s iteration directed federal science agencies to adopt more stringent requirements for grant applicants to disclose all other sources of research support they receive, including various “in-kind” contributions.

That move was largely aimed at uncovering foreign support provided to U.S.-based researchers, particularly from talent recruitment programs based in China. Those programs often allow participants to spend part of their time in China while continuing to work for their home institution in the U.S. Dozens of scientists have been arrested or fired over the past three years for not disclosing such arrangements, though some cases have been contested.

Last year’s NDAA also required the Department of Defense to publicly publish a list of foreign talent recruitment programs that “pose a threat to the national security interests of the United States,” though DOD has not yet done so.

The prohibition proposed for this year's NDAA would require all federal agencies with annual extramural research expenditures exceeding $100 million to bar grantees from any malign programs supported by entities in countries of concern. The provision does not specify whether the list of such programs will be coextensive with the list DOD is required to publish.

The prohibition would apply to any individual who “contributes in a substantive, meaningful way to the scientific development or execution of a research and development project proposed to be carried out,” but it would not apply retroactively to current grants.

Examples of activities that are explicitly allowed under the provision are participating in international conferences, advising foreign students, and participating in joint projects that involve “open and reciprocal exchange of scientific information.” Science agencies would also be empowered to deem other activities “appropriate.”

The provision’s author is Rep. Mike Waltz (R-FL), who also sponsored last year’s cross-government disclosure provision and the requirement that DOD maintain a list of recruitment programs of concern. In addition, he has attached another proposal to this year’s NDAA that would require grantees across science agencies to receive training on security risks related to “international collaboration and international travel, foreign interference, and rules for proper use of funds, disclosure, conflict of commitment, and conflict of interest.”

Discussing an earlier version of the prohibition provision during a House Science Committee meeting in June, Waltz remarked, “We know that most of these talent program contracts already violate federal grant terms and conditions, but now there will be no question left in the mind of a faculty member of the university of whether or not participation is allowed.”

Science Committee Chair Eddie Bernice Johnson (D-TX) backed that provision, remarking, “We all understand that the risks are real. We also understand the need for science to remain open and collaborative … I believe this amendment was carefully developed to balance those risks and benefits.”

Lawmakers and science community representatives have grappled with how best to tailor a response to talent programs. Waltz’s provision is more targeted than its analogue in USICA, which is not explicitly limited to “malign” programs.

University associations have specifically endorsed Waltz’s approach over the USICA provision, stating, “It is critical that any prohibition does not exclude legitimate research partnership activities, including joint publication, conference activities, and other activities necessary for our country to remain competitive on global scientific and technological challenges.”

However, some in the scientific community have expressed concerns that even prohibition policies that exempt certain activities can discourage collaborations that benefit the U.S. In an August essay criticizing the government’s recent approach toward research security policy, leaders of the American Physical Society described the impacts of an order the Department of Energy issued last year that prohibits employees at its national labs from participating in talent programs sponsored by certain countries.

They wrote, “According to this order, even benign activities that are essential for the conduct of science, such as serving on international science advisory committees for Chinese research institutes, now require a waiver that must be approved by the secretary of energy herself. Needless to say, the result of such an order is to curtail most of these activities, and the United States is the poorer for it. Some researchers are even hesitating to participate in anonymous reviews of research papers or grant proposals if the author happens to be in China.” (APS is an AIP Member Society.)

Concerns about overreaction to the influence of recruitment programs were also raised this week at the inaugural meeting of the President’s Council of Advisors on Science and Technology under the Biden administration. Bindu Nair, who oversees DOD's basic research portfolio, noted FBI Director Christopher Wray has referred to recruitment programs as resulting in U.S. taxpayers “effectively footing the bill for China's own technological development.”

Criticizing that characterization, she remarked, “This perspective of protecting the products of open science in the United States and globally from unethical actors I think misses part of the bigger picture. It assumes a unidirectional flow of information from the U.S. and her allies to other parts of the world. And we all know that that's not true.”

“We build on Chinese investments, perhaps just as much as they build on ours. I see that in the [grant] proposals that come to me. The baseline understanding of a field is built from papers not produced here,” she added.

Nair suggested the U.S. respond to foreign recruitment programs by being more proactive in its own efforts to attract talent from abroad.

“As it stands, we do not have viable immigration processes needed to attract, support, and retain international scientists. The hundreds of thousands of immigrant scientists who have chosen to come to the U.S. for their doctoral and postdoctoral training are an untold source of soft power, whether they stay here or return back to their home countries,” she said.

Previous iterations of the NDAA have placed particularly extensive research security requirements on DOD, directing it to collect additional information on its grantees and to limit or prohibit funding for individuals who violate policies pertaining to talent recruitment programs.

However, lawmakers have also been interested in probing how U.S. recruitment efforts stack up to those of China. Last year’s NDAA directed DOD to commission a National Academies study that compares efforts by the U.S. and China to “recruit and retain domestic and foreign researchers.” It also stipulates that the study assess the overall risks and benefits of scientific cooperation between the two countries.