DOE Panel Finds US Falling Behind in Basic Energy Sciences

According to a new advisory panel report, the U.S. is losing ground to Europe and China in several key research areas supported by the Department of Energy's Basic Energy Sciences program. The report recommends several strategies for better retaining talent in the U.S. and maintaining world-leading facilities. 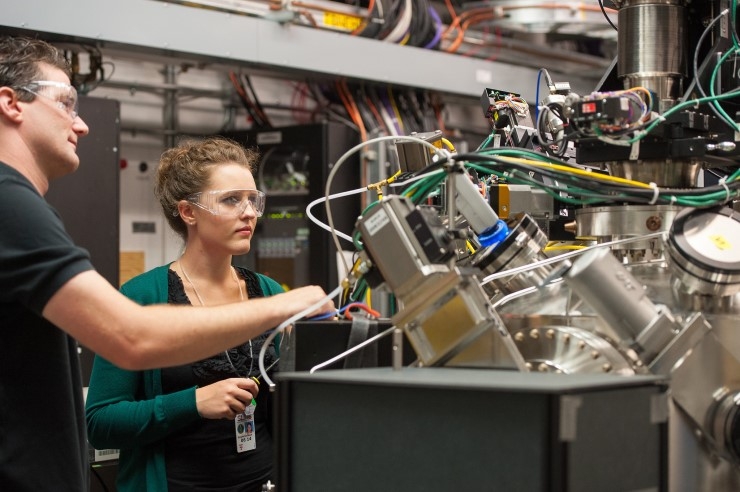 Researchers working at SLAC’s Linac Coherent Light Source. Completed in 2009, LCLS was the world’s first hard X-ray free electron laser, but facilities in Europe and Asia have since exceeded its capabilities.

The Department of Energy’s Basic Energy Sciences Advisory Committee (BESAC) released a draft report last week warning that the research and major facilities supported through the department’s BES program are losing ground to Europe and China. BES is the largest of the DOE Office of Science’s six main programs, currently commanding a $2.3 billion annual budget, and it supports a national fleet of light and neutron source facilities and nanoscience research centers that together typically serve more than 15,000 users annually.

The report finds the U.S. has already been surpassed in certain fields of research supported by BES and is falling behind in the competition for global talent. To bolster U.S. competitiveness, it recommends strategies such as improving funding mechanisms for early-career and mid-career scientists, enhancing opportunities for staff scientists at research facilities, increasing investment in research infrastructure, and better integrating basic, applied, and industrial research.

The report was produced by a BESAC subcommittee chaired by Harvard University chemist and Kavli Foundation President Cynthia Friend, with University of Chicago molecular engineer and Argonne National Lab Deputy Director for Science Matt Tirrell serving as vice chair. Carnegie Institution for Science President Eric Isaacs and Stanford University physicist Zhi-Xun Shen also had leading roles. BESAC is expected to approve the report after the draft is finalized in response to comments.

(Update: The final version of the report is now posted here.)

The Office of Science issued the charge for BESAC's study in February 2019, asking for it to evaluate the international competitiveness of the BES program and recommend strategies for future activities. To manage the task, the study subcommittee chose to focus on five “critical” areas:

The subcommittee benchmarked U.S. efforts in each of the areas after analyzing publication citations and conference participation rates spanning three decades, and consulting with nearly 60 individuals across DOE national laboratories, universities, private industry, and research organizations outside the U.S.

The report concludes that the U.S. share of the 20% most-cited papers has dropped across all the critical research areas over the last decade, while China’s share has increased significantly. China now leads in areas such as energy storage and sustainable energy science, while the European Union leads in quantum information science. Citing the “qualitatively similar” results across subfields, the report infers the findings would apply across other areas of the BES research portfolio as well.

World-leading US facilities no longer unique

Concerning the BES light and neutron sources, the report finds that while U.S. capabilities have traditionally set the pace globally, facilities abroad are catching up to the U.S., and in many cases surpassing it.

For example, the report notes that the U.S. completed the world’s first hard X-ray free electron laser (XFEL) in 2009, SLAC’s Linac Coherent Light Source, but that the European XFEL facility now leads in beam brightness and that the Chinese SHINE XFEL facility currently under construction aims to match or exceed the capabilities of a planned upgrade to SLAC’s in-progress LCLS-II facility.

The report also flags that domestic demand for user time at U.S. light sources far exceeds current capacity and that facilities in other countries have “rapidly outpaced” the U.S. in total number of beamlines. For instance, it states that European and Asian XFEL facilities boast a combined 16 beamlines and 36 instruments, whereas the U.S. has two beamlines and eight instruments. Since 2000, the number of synchrotron beamlines worldwide has nearly doubled to 879 while the number in the U.S. has remained roughly constant at 186.

The report notes that U.S. neutron sources are likewise oversubscribed and face “competitive deficits” relative to facility capacity in Europe. It states the situation has been “exacerbated” by this year’s temporary shutdown of the Center for Neutron Research operated by the National Institute of Standards and Technology and the need to "upgrade or replace" the 55-year-old High Flux Isotope Reactor at Oak Ridge National Lab, in line with the recommendation of a report that BESAC released last year.

The report recognizes that BES has been prioritizing upgrades to its user facilities and recommends considering “additional capital investment in electron microscopy, nanocenters, and computational facilities.” It also suggests DOE should extend its long-range planning efforts beyond facility capabilities to encompass “human resources, instrumentation, operational innovations, and science programs at facilities.”

Other countries seen as increasingly attractive to researchers

Workforce issues arise as a major concern throughout the report. For instance, it suggests Europe is now in a “stronger position” in scientific computing due in part to a “notable loss of senior scientists” from the U.S. In addition, it asserts that European facilities have been more successful in recruiting and retaining scientific staffs. Attributing this success to the broader scope of work and career development opportunities available to facility staff in Europe, the report suggests BES conduct a “thorough analysis” of the job descriptions, scientific productivity, and career paths of U.S. facility scientists.

Broad consultations carried out during this study lead unambiguously to the conclusion that the U.S. is now losing the global competition for talent. Weakness in talent recruitment and retention appears from this study to be one root cause of failure to achieve the desired competitive status for the U.S.

Among the factors the report identifies as contributing to the situation are the rapid expansion of scientific infrastructure in China, difficulties in obtaining visas to work in the U.S., and the perception that the U.S. is less welcoming to immigrants than in the past.

Moreover, the report finds that an increased availability of research funding opportunities has made Europe and Asia more attractive to scientists in recent years, highlighting in particular “generous long-term funding” offered by Germany’s Max Planck Institutes and the European Research Council’s five-year research grants. The report states that “a troubling number of top scientists” have left the U.S. for positions in Europe in recent years, adding, “While the number of such people is not very large, they are among the top people in their respective fields.”

The report also discusses the effect of talent recruitment programs, many of which are designed to encourage established scientists to return to their countries of origin after pursuing education or work abroad. It notes the recent attention paid to China’s Thousand Talents program but observes that “the number of high visibility losses to China is still quite small in the physical sciences and engineering.”

It also states that China’s program is “by no means unusual in the global landscape,” citing the Returning Singaporean Scientists Scheme as another Asian program aiming to recruit researchers who might have remained in the U.S. It also notes competition from programs in other English-speaking countries, such as the Australian Laureate Fellowships, the Canadian Research Chairs program, and the UK’s Royal Society Research Professorships program.

In light of this competition, the report recommends BES boost funding for early-career and mid-career scientists in order to “create a more sustainable career path that builds on current investments in the development of the scientific workforce.”

Among other possibilities, the report recommends doubling the award amounts offered by DOE’s Early Career Research Program to $1.5 million over five years for university investigators and $5 million for national laboratory investigators, bringing the program into alignment with the European Research Council’s Starting Grants. It also suggests offering a follow-on opportunity that would provide five years of additional funding to at least half of the early-career award recipients, similar to ERC’s mid-career Consolidator grants.

Noting that there are few awards available for single investigators in the physical sciences with durations over three years, the report also recommends DOE consider establishing a Senior Investigator Award program that would provide $5 million over five years to top investigators. It further suggests a fraction of the awards could be dedicated to recruiting non-U.S.-based talent.

The report observes, "The United States has not generally offered such schemes, depending instead on a constant influx of foreign scientists. However, this study confirms that influx does not automatically lead to retention and, in fact, that retention is diminishing."