The House and Senate both propose to increase funding for the Department of Energy’s Office of Science in fiscal year 2022. While the proposed funding levels are similar to the amount requested by the administration, they fall well short of those recommended in recent House-passed legislation and could result in slower progress on certain projects.

In their spending legislation for fiscal year 2022, House and Senate appropriators propose increasing the annual budget for the Department of Energy’s Office of Science by 4% and 7%, respectively. The Biden administration has requested a 6% increase in the budget, which currently stands at just above $7 billion.

House Science Committee Chair Eddie Bernice Johnson (D-TX) previously expressed concern to House appropriators that the requested budget would be insufficient to support the office’s burgeoning portfolio of construction projects and could leave its research programs squeezed for funds. She and other members of the committee have already advanced the DOE Science for the Future Act, which the House passed by an overwhelming margin in June, making a non-binding recommendation for Congress to appropriate $8.8 billion for the office in fiscal year 2022, ramping up to $11.1 billion over five years.

In the Senate, at least some of the $17 billion in additional funding recommended for DOE in the bipartisan U.S. Innovation and Competition Act (USICA), which the chamber passed in June, would likely be for the office’s programs. The Senate Energy and Natural Resources Committee has started to focus attention specifically on the Office of Science, and, in addition to the recommendation in USICA, Committee Chair Joe Manchin (D-WV) has said DOE and its national labs have $35 billion in infrastructure and equipment needs. That funding could be provided through a massive multiyear spending package that congressional Democrats are seeking to pass on a likely party-line vote using Congress’ budget reconciliation process.

Aside from the potential for a special spending package, there is also greater-than-usual uncertainty around the annual spending legislation, as appropriators’ proposals have been unconstrained by any agreement on the scale of total federal spending in the coming fiscal year — a matter that will ultimately require Democrats to secure assent from some Republicans.

Congressional proposals for specific programs in fiscal year 2022 are detailed in reports by the House and Senate Appropriations Committees on their respective spending bills for DOE. The topline differences between the proposals are most pronounced for the Nuclear Physics and Fusion Energy Sciences programs, as depicted in the chart below. Detailed figures are collected in FYI's Federal Science Budget Tracker. 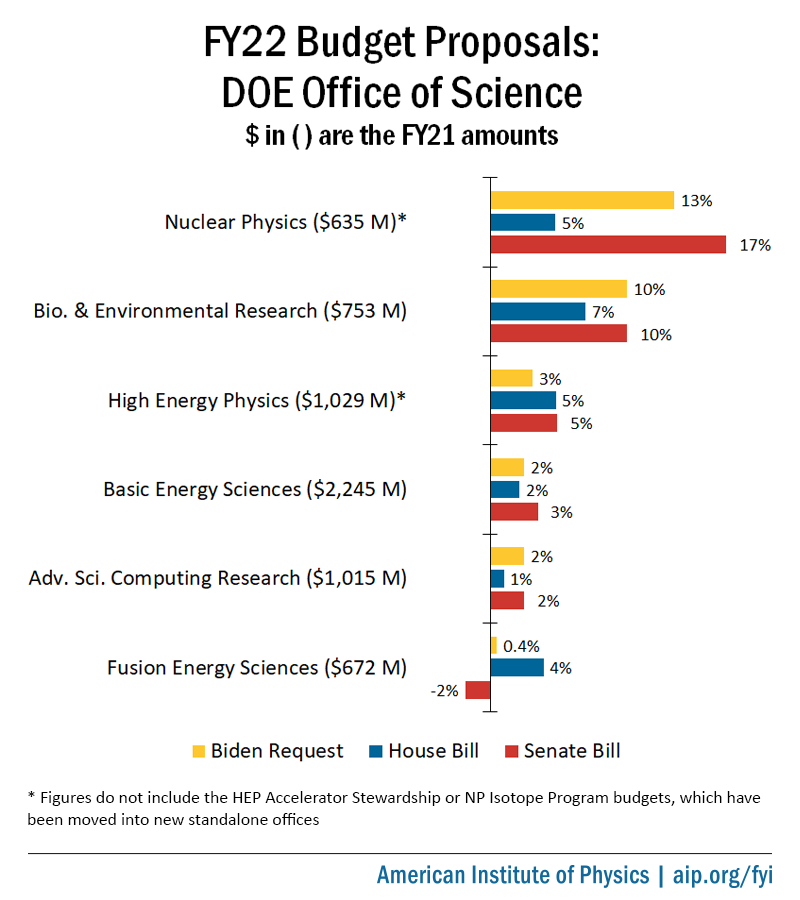 QIS and AI. As they did last year, the House and Senate both recommend DOE provide at least $245 million for quantum information science research across office programs, including $125 million for DOE’s five QIS research centers. The administration proposed to increase QIS funding from its current level of $270 million to $301 million. In addition, the House recommends DOE spend at least $115 million on artificial intelligence research while the Senate proposes at least $120 million, both up from the minimum of $100 million Congress recommended last year. The office's current budget for AI is $124 million.

Workforce diversity. Both the House and Senate express support for the administration’s proposed office-wide RENEW (Reaching a New Energy Sciences Workforce) initiative, which aims to increase participation and retention of underrepresented groups in the office’s research activities. The administration has proposed an initial budget of $30 million for the initiative, drawn from across the office’s program budgets.

New accelerator and isotope offices. Congress accepts the administration’s proposal to create a standalone Office of Isotope R&D and Production as well as an Office of Accelerator R&D and Production. The Senate would meet the administration’s request of $24 million for the accelerator program and $90 million for the isotope program, while the House would provide smaller increases to $18 million and $82 million. The isotope activities were previously housed in the Nuclear Physics program budget and the accelerator office is built mostly around activities that were previously part of the High Energy Physics program.

The House proposes to increase funding for FES by 4% to $698 million, while the Senate proposes a 2% cut to $660 million for the program, reflecting a proposed reduction in the U.S. contribution to construction of the international ITER facility. In contrast, the Energy Act of 2020 recommends that Congress fund the program at nearly $1 billion in fiscal year 2022 to accommodate increased contributions to ITER as well as a pivot toward laying groundwork for a U.S.-based fusion power industry.

Milestone-based program. The House would provide up to $45 million for initiation of the milestone-based development program authorized in the Energy Act, which would provide reimbursements to private fusion ventures when they achieve defined technological goals. The program is not mentioned in the administration's request nor in the Senate report.

MEC upgrade and MPEX. The Senate proposes to hold construction funding steady at $15 million for early work on an upgrade to SLAC’s Matter in Extreme Conditions instrument, while the House matches the administration’s request of $5 million. DOE initiated the project in response to a 2017 National Academies report that spotlighted how the U.S. lags internationally in capabilities for laser research at the highest powers currently achievable. The House and Senate both support the administration’s proposal to increase equipment funding for Oak Ridge National Lab’s Materials Plasma Exposure eXperiment by $4 million to $25 million.

After accounting for the separation of isotope activities from the NP budget, the Senate proposes to increase the NP program topline by 17% to $744 million, while the House would increase it by 5%. The program’s head has said the House’s proposed funding level would pose a “serious challenge” to current plans and activities.

Electron-Ion Collider. The Senate proposes to ramp up construction funding for Brookhaven National Lab’s flagship Electron-Ion Collider project to $20 million, while the House proposes to keep it level at $5 million. Neither proposal specifies any supplemental funding for the project, which DOE classifies as “other project costs,” though such funds could be allocated after the budget is enacted. Including such costs, the total current budget for EIC is $30 million. DOE has estimated the project’s total cost will fall between $1.7 billion and $2.8 billion.

Other projects. The House and Senate both propose to ramp up equipment funding for the MOLLER, Gamma-Ray Energy Tracking Array, and High Rigidity Spectrometer projects, well exceeding the administration’s requested budget levels. In addition, the Senate proposes steady funding of $1.4 million for early work on a prospective ton-scale neutrinoless double beta decay experiment.

Excluding the transfer of HEP’s Accelerator Stewardship program into the new Office of Accelerator R&D and Production, the House and Senate both propose to increase the HEP topline by 5% to $1.08 billion.

LBNF/DUNE and PIP-II. The House and Senate would provide the requested funding of $176 million for DOE’s flagship Long-Baseline Neutrino Facility and Deep Underground Neutrino Experiment project and $90 million for the associated Proton Improvement Plan II accelerator upgrade at Fermilab. In addition, both proposals specify that DOE should allocate $30 million for work at the Sanford Underground Research Facility, where the DUNE detectors will be installed. Congress has not weighed in on the uncertainties currently surrounding the project’s total cost arising partially from shortfalls in international contributions. CERN announced yesterday that it has agreed to provide a second cryostat for the DUNE detector.

Mu2e. Pandemic-related disruptions caused Fermilab’s upcoming Muon-to-Electron Conversion Experiment (Mu2e) to exceed its total baseline budget, which had been fully appropriated. Last year Congress provided $2 million for the project to address the situation. Now, the Senate proposes to meet DOE’s request for an additional $13 million for fiscal year 2022, while the House proposes to provide another $2 million.

CMB-S4. Both the House and Senate propose to ramp up funding for early work on the Cosmic Microwave Background Stage-4 experiment from $7 million to $20 million. The administration requested steady funding for the project, which is expected to cost between $320 million and $395 million in total.

Large Hadron Collider upgrades. The Senate would direct DOE to allocate at least $40 million for an upcoming upgrade to CERN’s Large Hadron Collider and associated detector upgrades, which have experienced pandemic-related delays. The amount is just over half the department's contributions to the projects in the current fiscal year and meets the administration's request, which states the proposed budget would “focus support on critical path items to best maintain international schedule synchronization for the project." The House does not specify an amount for the upgrades. 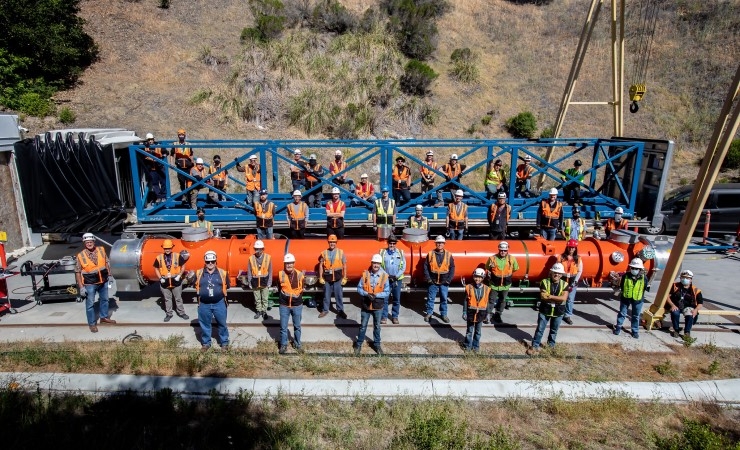 The final cryomodule required for construction of SLAC's Linear Coherent Light Source II facility arrived from Fermilab in May 2021. DOE has requested additional funds to address pandemic-related delays to the project.

The House and Senate proposals hew closely to the administration’s request to increase the BES budget by 2% to $2.3 billion. Most BES research centers and user facilities would receive steady funding under the proposals and funding for the Energy Frontier Research Centers would increase from $115 million to $130 million.

Major facility upgrades. The House and Senate would fund construction projects at the levels requested. Both proposals would provide the $32 million DOE requested to address costs stemming from pandemic-related delays to the Linac Coherent Light Source II project at SLAC and would hold the budget steady at $50 million for early work on a follow-on energy upgrade. Funding is set to ramp down on the Proton Power Upgrade to the Spallation Neutron Source at Oak Ridge National Lab and on the Advanced Photon Source upgrade at Argonne National Lab as both projects near the completion of their funding profiles.

Meanwhile, construction budgets are set to ramp up by $13 million for the Advanced Light Source upgrade at Berkeley Lab and by $3 million for the Spallation Neutron Source’s Second Target Station at Oak Ridge National Lab. However, the House does not specify any funds for other project costs for the neutron source upgrade, which added $13 million to the project’s total budget in the current fiscal year. The administration proposed no funding in this category, but the Senate states it supports providing such funds without specifying an amount.

The House proposes to increase the BER topline by 7% to $805 million, while the Senate proposes a 10% increase to $828 million, matching the administration’s request. Under both proposals, the additional funds would go largely to the Earth and Environmental Systems Science subprogram while funding for the Biological Systems Science subprogram would hold roughly steady.

Low-dose radiation research. As it did last year, the House proposes to ramp up funding for research on the biological effects of low doses of radiation from $5 million to $10 million, while the Senate does not address the subject. DOE shuttered the research program in 2016, but Congress passed legislation in 2018 directing it to resume the work. The Energy Act recommends that Congress ramp up the program’s budget to $40 million by fiscal year 2024. The House report highlights that the act also mandated a National Academies study, which is currently underway and will recommend a strategy for the program spanning DOE’s national laboratories, universities, and other federal agencies.

The Senate would meet the administration’s request for a 2% increase to ASCR’s $1.04 billion topline, while the House proposes a 1% increase. The House and Senate would in most cases meet the budget requests for computing facility operations, though the Senate would provide an additional $15 million for Berkeley Lab’s National Energy Research Scientific Computing Center and the House would provide about $4 million less than requested for ESNet. The Senate also proposes to double funding for the Computational Sciences Graduate Research Fellowship to $20 million, while the House matches the administration’s request of $15 million.