NIST’s $1 billion budget would surge by more than 30% under the House and Senate appropriations bills for fiscal year 2022, and the agency could see further increases through two special spending bills also currently pending. 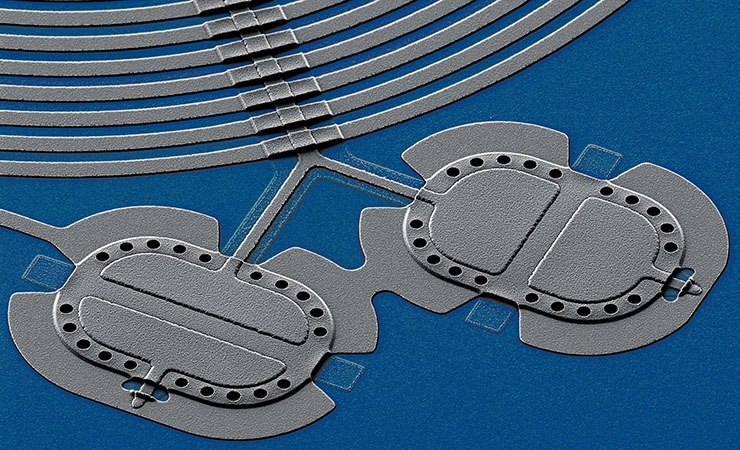 The $1 billion annual budget of the National Institute of Standards and Technology would jump by more than 30% under the House and Senate’s appropriations bills for fiscal year 2022. The increases are among the highest in percentage terms proposed across science agencies this budget cycle, though they fall short of the 45% increase the Biden administration requested.

The final budget amount for NIST may be considerably lower than the current House and Senate proposals, as the bills were assembled by Democrats in the absence of an agreement with Republicans on overall federal spending limits for the year. Republicans have argued the bills in aggregate spend too much on domestic programs and not enough on defense, and Democrats will require the support of at least 10 Republican senators to avoid a filibuster.

The bills are accompanied by explanatory reports from the House and Senate Appropriations Committees that contain funding and policy direction for selected NIST programs. Summary figures are available in FYI's Federal Science Budget Tracker. 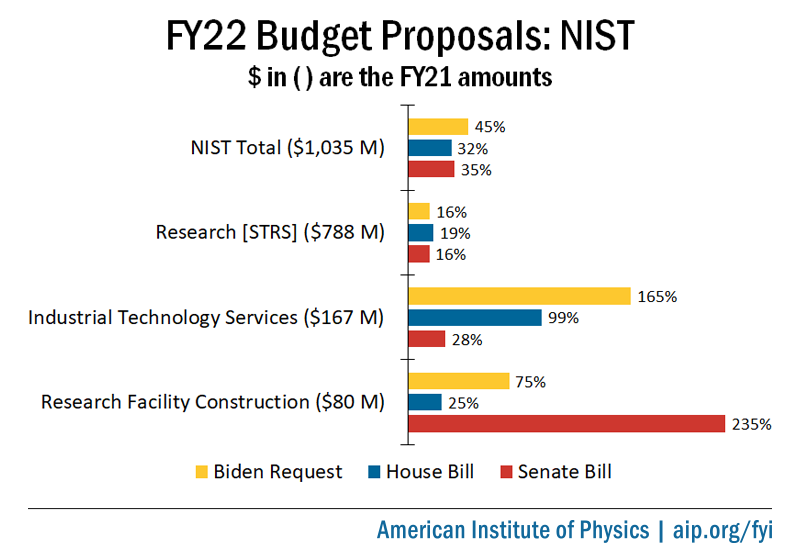 Outside the regular appropriations process, NIST may benefit from special spending legislation currently under development. Democrats are attempting to use the partisan budget reconciliation process to spend more than $1 trillion over ten years without the need for any Republican support, and the House’s latest version of the legislation, called the Build Back Better Act, includes $1.25 billion for NIST over seven years, split between research, manufacturing, and facilities initiatives. However, the legislation may still change through ongoing negotiations with Senate Democrats.

Separately, there is a bipartisan push to spend $52 billion on domestic semiconductor manufacturing and R&D over five years to implement initiatives recently authorized through the CHIPS for America Act. Of this total, the Senate-passed U.S. Innovation and Competition Act (USICA) would allocate $3 billion directly to NIST for semiconductor R&D in fiscal year 2022 alone, with further funding in future years. However, the House has not yet indicated if it will follow suit in providing this funding.

The CHIPS for America Act specifically directs NIST to establish an Advanced Packaging Manufacturing Program to “strengthen semiconductor advanced test, assembly, and packaging capability in the domestic ecosystem.” It also authorizes NIST to establish a Manufacturing USA institute focused on semiconductor manufacturing and more generally requires NIST to maintain a research program focused on “measurement science, standards, material characterization, instrumentation, testing, and manufacturing capabilities that will accelerate the underlying research and development for metrology of next generation microelectronics.”

Within the fiscal year 2022 allocation, USICA would provide $2.5 billion for the Advanced Packaging Manufacturing Program and $500 million for the microelectronics research program. These programs would work in coordination with the National Semiconductor Technology Center, another major initiative authorized by the CHIPS Act. The center is envisioned as a public-private consortium led by the Department of Commerce, which houses NIST, with participation from the National Science Foundation and the Departments of Energy and Defense. Altogether, the center and the NIST programs would receive $11 billion from fiscal year 2022 to fiscal year 2026, and the funds would be available until expended.

In the regular appropriations process, the bulk of NIST’s R&D programs are supported through the agency’s Scientific and Technical Research and Services account, which is currently funded at $788 million. The House and Senate bills would increase the account by $150 million and $125 million, respectively, and the Appropriations Committee reports allocate much of the new money to priority initiatives proposed by NIST.

QIS and AI. The Senate directs NIST to increase funding for quantum information science and artificial intelligence by up to $15 million each, matching the requested totals of $62 million and $45 million, while the House directs NIST to increase each by at least $12.5 million. The House also directs NIST to “evaluate the potential for public-private partnerships to develop and deploy practical quantum applications that government and the private sector can utilize within one to three years so that the government may have the benefit of near-term applications.”

Climate and energy research. The House and Senate both meet the administration’s request to increase funding for the Climate and Energy Measurement, Tools, and Testbeds program by $20 million to $67 million. Both express support for the program’s greenhouse gas monitoring efforts, including the Urban Dome initiative that characterizes emissions from cities. They also both direct NIST to continue working with the National Oceanic and Atmospheric Administration to develop an “authoritative set of climate information that emphasizes forward-looking climate data and projections,” specifically to inform updates to building standards aimed at increasing resilience to extreme weather events.

The House further specifies that NIST spend at least $3 million above the amount requested for efforts to develop fire-resilience standards for buildings in the wildland-urban interface and that at least $5 million go to “direct air capture and carbon dioxide removal and sequestration research,” while the Senate encourages research in these areas without specifying funding levels. In addition, the House’s Build Back Better Act includes $100 million for NIST to research the “impact of fire on structures and communities located at the wildland-urban interface.”

Building collapse investigations. The House specifies that $22 million go to “investigate building collapses to understand the source of failure and to provide recommendations for how to rectify any shortcomings in existing building standards in order to prevent future similar disasters.” Congress has since provided these funds as part of the stopgap measure currently funding the government, and NIST has indicated they are specifically for investigating the June 24 collapse of the Champlain Towers apartment complex in Florida.

Earmarks. The Senate earmarks $38 million of the increase to fund 20 projects at universities across the U.S. This is the first budget cycle since 2011 that appropriators have permitted earmarks that are explicitly for particular projects. The House Appropriations Committee also permitted earmarks, but made none for NIST. 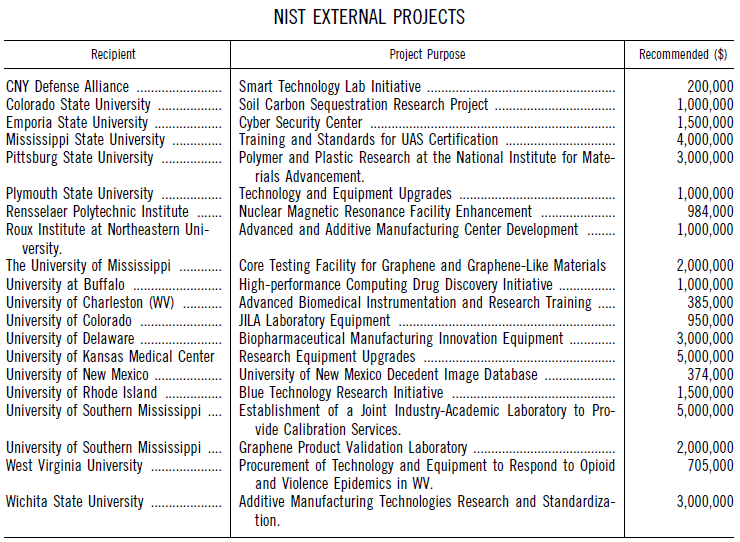 Workforce diversity. The Senate matches the administration’s request to increase funding for workforce diversity initiatives by $5 million to $17 million. Of the requested increase, $3 million is to create an educational partnership program with Minority Serving Institutions and $2 million is to create a program that would recruit postdoctoral researchers from underserved backgrounds to work in NIST laboratories. The House endorses allocating the $3 million for the MSI partnership program.

The House would increase the budget for research facility construction and repair from $80 million to $100 million, well short of the $140 million requested, while the Senate would match the request and provide an additional $126 million to seven construction projects external to NIST.

In addition, the House’s Build Back Better Act includes $650 million for the “upgrade, replacement, maintenance, or renovation of facilities and equipment as necessary to conduct laboratory activities, and for related administrative expenses.”

The administration requested a $150 million increase to create two new institutes, one of which would be focused on semiconductor design and manufacturing. By contrast, the Senate report directs that $10 million go to the existing National Institute for Innovation in Manufacturing Biopharmaceuticals and $20 million go to a new, competitively awarded institute that would be selected from any of the authorized topic areas for Manufacturing USA.

The House matches the administration’s request to increase Manufacturing Extension Partnership program’s budget from $150 million to $275 million, while the Senate proposes $175 million. The House’s Build Back Better Act includes an additional $260 million for the program, as well as $220 million for “advanced manufacturing research, development, and testbeds, through new and existing programs and public-private partnerships.”