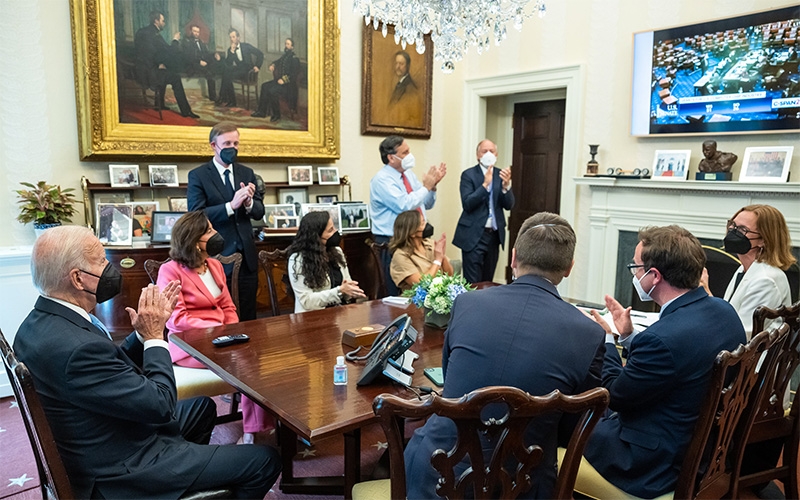 President Biden, left, applauds the final Senate vote on the semiconductor funding and innovation policy legislation that is now known as the CHIPS and Science Act. (Image credit – The White House)

Congress passed landmark innovation legislation yesterday and it is now headed to President Biden, just weeks after negotiations over it fell apart. Called the CHIPS and Science Act, the bill provides tax credits and $52 billion in subsidies to bolster the U.S. semiconductor industry, and it outlines an ambitious vision for expanded federal support for science and technology more broadly.

Events leading to the bill’s passage began June 30, when Senate Minority Leader Mitch McConnell (R-KY) took it hostage to dissuade Democrats from using Congress’ budget reconciliation process to pass a partisan package of tax reforms and climate change mitigation and healthcare spending. Days after Republicans followed through on the threat, the key Democratic negotiator on the reconciliation package, Sen. Joe Manchin (D-WV), declared he would only support a narrow healthcare-focused reconciliation bill. The move outraged other Democrats but cleared the way for CHIPS and Science to proceed with enough Republican support in the Senate to prevent a filibuster.

But then, only hours after the Senate passed the CHIPS and Science Act, Manchin and Senate Majority Leader Chuck Schumer (D-NY) announced they had agreed on a reconciliation package that includes tax provisions and $369 billion in climate-related spending. If enacted, that bill will provide a one-time boost to the science budgets of the Department of Energy and National Oceanic and Atmospheric Administration in addition to its more expansive funding for resilience measures and clean energy incentives.

Congress has been working toward subsidizing the semiconductor industry for about two years, beginning with the June 2020 introduction of the bipartisan “CHIPS for America” legislation by Sens. John Cornyn (R-TX) and Mark Warner (D-VA) and Reps. Doris Matsui (D-CA) and Michael McCaul (R-TX). A version of that legislation swiftly became law as part of that year’s National Defense Authorization Act.

Although the finalized CHIPS for America legislation did not include funding for its initiatives or even set funding targets, in early 2021 support for such funding quickly built up amid a pandemic-driven disruption to global microelectronics supply chains, and it also became a Biden administration priority.

For the Republicans who support it, the spending represents a significant break from the party’s longstanding resistance to subsidy-driven industrial policy. Their favor has been gained through concerns about the national and economic security implications of allowing chip production to be concentrated in Asia, as well as the prospect of attracting billions of dollars of private high-tech investment in states such as Texas and Ohio.

The spending has been generally well accepted among Democrats, though it has drawn criticism from a few leftwing members of the caucus who argue it is a giveaway to highly profitable corporations. Sen. Bernie Sanders (I-VT) has been particularly vocal on the issue and opposed the legislation each time it came up for a vote in the Senate.

In general, the prospects have appeared consistently favorable that Congress would approve the CHIPS funding. However, progress was slow largely because Schumer decided early in 2021 that it would be attached to a larger bipartisan policy package focused on innovation and national competitiveness he was championing. Since then, the CHIPS funding has often been cited as a key motivation to finish work on the larger package.

Schumer has recounted that he and Sen. Todd Young (R-IN) hatched the idea of an ambitious innovation initiative in the Senate gym in 2019, seeing it as a viable way to address shared concerns among Democrats and Republicans about China’s growing technological strength. Later that year, Schumer publicly floated a proposal to provide $100 billion to the National Science Foundation over five years to advance strategic technologies such as artificial intelligence.

Once Democrats took control of the Senate and White House in 2021, Schumer and Young revived the idea through a bill called the Endless Frontier Act, which included the NSF spending proposal as a funding target rather than a direct appropriation. Driving it forward quickly, Schumer hoped that incorporating it into a broader package focused on competition with China would, with the CHIPS funding attached, put it on a bipartisan glide path to enactment.

Following a chaotic flurry of amendments incorporated during committee and floor debate, that summer the Senate passed what it called the U.S. Innovation and Competition Act. Progress then stalled as the House advanced an alternative vision that, among other changes, sought to safeguard NSF’s mission in basic science, focus less directly on competition with China, and pursue a different strategy for building up research capacity at institutions outside the top tier. Those proposals were incorporated into a bill called the America COMPETES Act of 2022 that the House passed earlier this year.

Negotiations to reconcile the House’s and Senate’s R&D provisions have mainly involved striking compromises around disputes that did not break down cleanly along party lines, though conflicts over research security measures have been more partisan. The strongest disagreements revolved around matters such as trade and foreign relations provisions that were attached to the bills to round out their policies for bolstering national competitiveness.

After Republicans walked away from negotiations earlier this month, lawmakers scrambled to salvage the CHIPS funding and attach additional bipartisan measures to create a bill provisionally known as “CHIPS-plus.” Following Manchin’s apparent abandonment of a sweeping reconciliation bill, it proved possible to retain negotiated versions of most innovation-related proposals, resulting in the final bill that Schumer branded as simply “CHIPS and Science.”

At the finish line, retiring Sen. Rob Portman (R-OH) vehemently protested the bill’s exclusion of bipartisan research security provisions he championed. However, he still voted for it, with the potential the matter could be taken up as part of a follow-on bill Schumer has proposed to advance portions left on the cutting-room floor. Absent any further dispute, the Senate then passed the CHIPS and Science Act on July 27 on a vote of 64 to 33.

Now, though, the prospects for any further negotiations may have been poisoned by Schumer and Manchin’s maneuvers to revive the reconciliation package.

Cornyn — a key shepherd of the CHIPS funding and executor of McConnell’s threat against CHIPS and Science — was left fuming by the Democrats’ strategy. “I can only speak for this senator when I say this betrayal is an absolute declaration of political warfare. To look you in the eye and tell you one thing and to do another is absolutely unforgivable,” he said.

The Democrats’ gambit also led House Republican leadership to whip votes against CHIPS and Science, but the chamber still passed it yesterday on a vote of 243 to 187 that included 24 Republicans in favor. That is 23 more Republicans than voted for the original COMPETES Act, which lost Republican support due to its inclusion of numerous partisan provisions that were mainly unrelated to innovation. 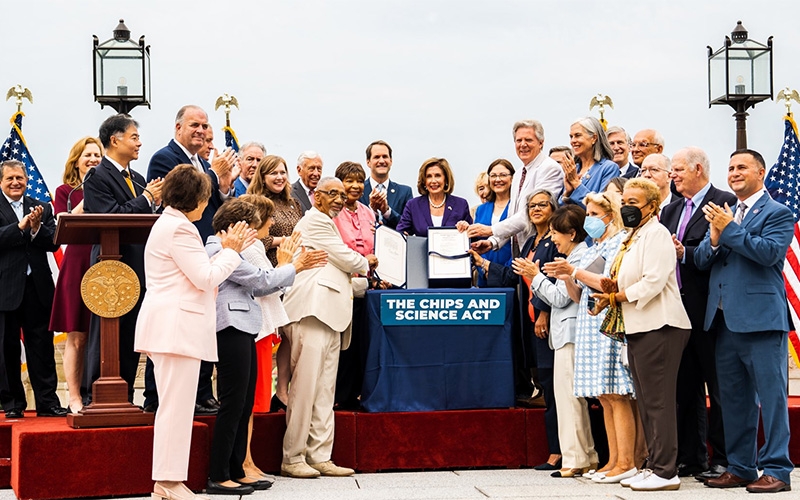 House Science Committee Ranking Member Frank Lucas (R-OK) reflected on the House floor that he supported the final CHIPS and Science Act, which both Republicans and Democrats on the committee helped shape. However, he lamented that he was compelled to vote against it because of the progress of the reconciliation package, which he referred to as a “massive tax hike and spending spree.”

“I was frustrated when negotiations were shut down, and I was even more frustrated when the House was shut out of discussions once they picked back up. So maybe I shouldn’t be surprised, but I am frankly disgusted by the developments over the past 24 hours,” Lucas said.

Meanwhile, Democrats have been jubilant at the resuscitation of a portion of the sums they have sought since the beginning of the Biden administration to address climate change. That multi-year funding is mainly for economic measures, but it also includes hundreds of millions of dollars for climate and weather activities at NOAA as well as science facilities projects in the DOE Office of Science that the Science Committee has championed.

In remarks delivered after Schumer and Manchin announced their deal, Biden welcomed Congress’ progress on his priorities, saying, “I know it can sometimes seem like nothing gets done in Washington … but the work of government can be slow and frustrating and sometimes even infuriating. Then the hard work of hours and days and months from people who refuse to give up pays off.”