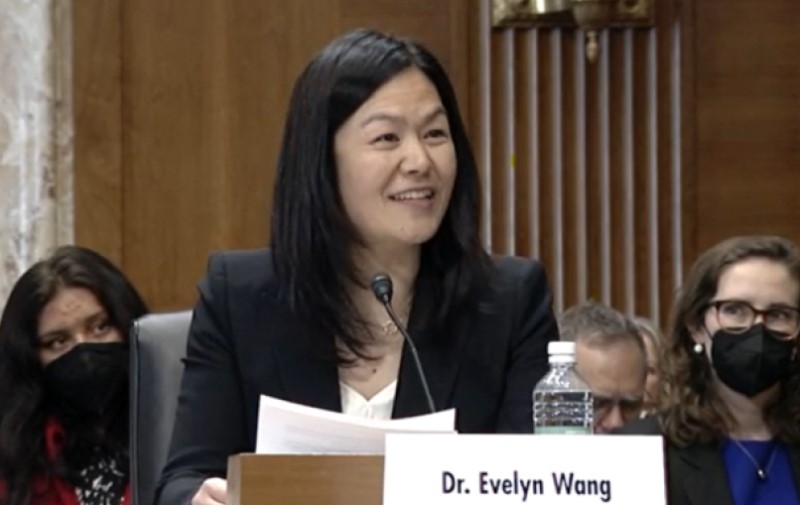 President Biden’s nominee to lead the Advanced Research Projects Agency–Energy, mechanical engineer Evelyn Wang, received a warm welcome from the Senate Energy and Natural Resources Committee at her nomination hearing last week, putting her on track for likely confirmation by the full Senate. An expert in heat transfer, Wang is currently the head of the Department of Mechanical Engineering at MIT.

Although the Biden administration has made energy innovation a central part of its climate agenda, ARPA–E lacked a nominee for director until Biden selected Wang in March. Last year, the administration kept its ambitions for the agency relatively modest while seeking tens of billions of dollars to implement later-stage technologies as well as smaller sums to set up a new “ARPA for climate.” Congress, though, ultimately rejected the climate ARPA idea, and now the administration is proposing to ramp up ARPA–E’s budget from $450 million to $700 million and expand its scope to include R&D on “climate adaptation and resilience innovations.”

Wang brings past experience with ARPA–E

Wang reflected at her nomination hearing that she was raised in an “academic household” in California and was introduced to science and engineering at a young age by her parents, who met as graduate students at MIT. She completed her own undergraduate studies at MIT in 2000 and received a doctoral degree in mechanical engineering from Stanford University in 2006. She then spent a year as a postdoctoral researcher at Bell Laboratories before joining the faculty at MIT in 2007.

Wang’s research has revolved around heat transfer and its application to clean energy and water technologies. At MIT, she has focused on the use of nanotechnologies, developing materials that improve the efficiency of steam power plants and increase the energy output from solar thermal photovoltaics. She has also developed water harvesting and desalination devices. Some of her funding has come from ARPA–E and she is an inventor on more than 15 patents.

From 2015 to 2016, she was a member of the Defense Science Study Group, a program funded by the Defense Advanced Research Projects Agency that aims to introduce academics to problems in national security. At her hearing, she described working with the group as a “pivotal experience that further motivated me to serve our country."

Senators from both parties spoke highly of Wang’s accomplishments and did not raise any concerns about her qualifications or policy views, instead using the hearing to solicit her thoughts on matters such as energy and mineral security, technology commercialization, and workforce development.

Committee Chair Joe Manchin (D-WV) asked Wang about the prospects for carbon capture, storage, and utilization, which has been a high priority for the committee under his leadership. In response, Wang highlighted ongoing ARPA–E efforts to increase energy efficiency of carbon capture technologies and lower their cost, such as a program that is developing materials with structures tailored to capturing carbon dioxide more effectively. She added, "The question is also, of course, the release once you capture it, and that can be relatively energy-intensive. And that's where there's the opportunity to be able to tailor again the structure of these materials.”

Later in the hearing, Wang identified carbon capture and storage R&D as an area in which ARPA–E could expand its collaboration with other DOE offices and federal science agencies, alongside nuclear waste management and renewable energy technologies.

The need to accelerate technology commercialization to meet U.S. energy goals was another theme that arose repeatedly. For example, in response to a question from Sen. Bill Cassidy (R-LA) about the “valley of death” faced by entrepreneurs seeking to translate research output into marketable products, she observed she had faced the problem firsthand working on ARPA–E-funded projects.

She remarked, “You get to the end of the project, but it's just not quite ready because you haven't considered, for example, how do you actually make materials that are manufacturable? How do you scale up these materials? I think there's an opportunity to be able to support further and add more to that part of the ARPA–E portfolio.” She also suggested that ARPA–E projects could be transferred to another of DOE’s applied energy offices for further development until they are ready for private investment.