NOAA Board Charts Weather Research Priorities for Next Decade

The National Oceanic and Atmospheric Administration’s Science Advisory Board has proposed 33 weather research priorities for the agency to address in the coming decade, which include increasing its computing power 100-fold and better understanding how social factors affect forecast dissemination and use. 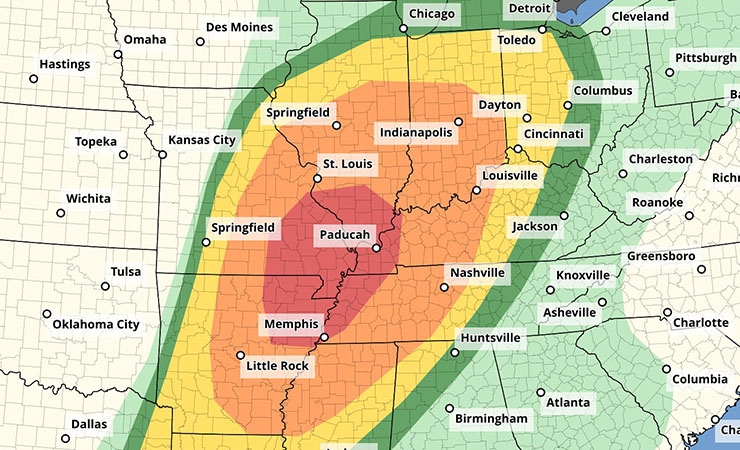 A cropped image of a severe weather outlook issued by the National Weather Service on Dec. 10 before a devastating chain of tornadoes cut across multiple states.

Speaking to SAB members ahead of their vote, NOAA Administrator Rick Spinrad said they should not delay submitting the report out of a desire to perfect its presentation, remarking, “This product that you've got is actionable, comprehensive, and extraordinarily useful in its current form.”

He stressed the report’s relevance to current congressional interest in bolstering NOAA as well as to the work of the new Interagency Council for Advancing Meteorological Services, an entity chartered last year in accord with a 2017 weather policy law. In addition, he said that a co-chair of the President’s Council of Advisors on Science and Technology, Maria Zuber, had expressed a “strong interest” to him in examining the future of weather forecasting.

The SAB was tasked by Congress in December 2020 to undertake a one-year study of weather research priorities, in lieu of a proposal for the National Academies to perform a formal decadal survey of the field. Study co-chair Brad Colman explained at last week’s SAB meeting that the report does not offer rank-ordered recommendations because Congress only requested “information necessary to prioritize investments.”

The report does however suggest 10 “immediate first steps” to take:

Colman noted the report does not cover all aspects of NOAA’s weather programs, such as the agency’s space weather and tsunami preparedness activities, the latter of which is the subject of a report recently completed by another study panel.

Concerning the gathering and use of observational data, the report calls for NOAA to take advantage of the growing value of smaller-scale platforms. It specifically recommends that NOAA roughly double its number of radars by supplementing the current network with “smaller, cheaper” scanning radars, and that the agency employ small-scale satellites and cubesats to supplement observations from its large satellites.

Observational priorities the report identifies include better coverage of boundary layers between the atmosphere, land, and oceans. “People live and work in the atmospheric boundary layer, and its characteristics exert a major influence on many weather phenomena ranging from thunderstorms to atmospheric rivers and overall seasonal weather patterns, and yet it is poorly observed,” it stresses.

Atmospheric rivers are columns of water vapor that can cause extreme precipitation and flooding, and the report notes that water and emergency managers need better forecasts of extreme precipitation to inform activities such as reservoir operations. It also laments that “precipitation prediction skill has not improved substantially in the last 20 years.”

Concerning models, the report recommends NOAA pursue a “fully coupled modeling framework that provides a holistic treatment of the Earth system,” which would underpin forecasts that span “weather to climate time scales from global to local spatial scales.” In support of predicting extremes in water cycles, the report identifies a need to improve how models are coupled across critical interfaces such as with groundwater, vegetation, and coasts. Highlighting a planned upgrade to the agency’s National Water Model that will tailor modeling approaches to specific regions, the report asserts, “The importance of this cannot be overstated, as it represents a major new direction that sets NOAA up for success.”

The report also places a strong emphasis on improving the delivery of weather forecasts, reframing the concept of the “mission-critical mile” by defining it as “the combination of understanding audiences (the ‘first mile’) and delivery of weather information to those audiences (the ‘last mile’).” Stressing that forecast success cannot be measured by accuracy alone and must also account for how people react to the information, the report states, “The mission-critical mile was for many years termed ‘the last mile’ but it is now clear that it is equally the ‘first mile.’” It later adds,

NOAA faces a dearth of systematic data on the people who make up the forecast and warning system and on the communities they serve, which is in stark contrast to the wealth of accessible atmospheric and other environmental data.

Accordingly, the report recommends NOAA adopt a “new paradigm” wherein “evidence about users’ needs and barriers informs and drives the development and delivery of weather information and atmospheric research, conceptually, structurally, and culturally.” It also urges NOAA to reduce “weather information inequity,” which is experienced for instance by people who live in geographic areas with poor communications and weather-observation infrastructure, or by those who are deaf or hard-of-hearing or who have impaired vision.

In addition to these human factors, the report notes that NOAA’s National Weather Service has faced technical challenges in maintaining its forecast dissemination systems, as evidenced by recent high-profile outages in its information technology systems. As a result, it calls for NWS to accelerate migration of such systems to commercial cloud networks while also continuing the agency’s practice of providing foundational data for free to all users.

More generally, the report calls on NOAA as a whole to “embrace open science,” including, among other means, by creating “disaster-proof, operationally (24/7/365) supported, scalable data access portals,” and by funding a new consortium that would seek to “normalize open science” for the next generation of weather scientists.

The report suggests NOAA needs “at least a 100-times increase” in computing power over the coming decade to realize the potential of new models and address an imbalance between computing resources available to communities engaged in weather research versus operational forecasting.

“The consensus of the weather community is that allocations for research and development should outweigh operational allocations by several times, and certainly be higher than the current 2-to-3 research-to-operations ratio in NOAA,” it states.

Pointing out that exascale computing systems are already being installed at Oak Ridge and Argonne National Labs, the report suggests that “it is reasonable for NOAA to aspire to a few percent of the computing capacity of these other national labs at a minimum.” It estimates that those labs will have around 100 exaflops of computing capacity by 2031, while NOAA would require “a few” exaflops for operational computing by then as well as 5-to-10 exaflops for R&D computing.

“Without increased computing resources, none of the recommended new models and data assimilation that improve the forecasts will be able to run on time,” it warns.

The report also cautions that NOAA faces a shortage of talent able to use new technologies, including exascale computers and advanced data assimilation techniques that employ AI, and recommends the agency establish targeted employee training programs for such critical areas.

Addressing NOAA’s weather workforce needs more broadly, the report states that university faculty are a “huge, untapped resource that could be used to help NOAA solve problems, diversify its workforce, and regain its international leadership in weather prediction.” It argues that university researchers are “better placed to engage in high-risk, high-reward research that could rapidly advance the NOAA mission than NOAA researchers who are focused upon research closer to operational use.”

However, the report states there is currently “no clear path” for university faculty members to receive funding from NOAA's Weather Program Office for novel research proposals that fall outside of its grant opportunities. Accordingly, it recommends NOAA make the office's grant process more open-ended, using the National Science Foundation's review process as a model. It also proposes NOAA establish multi-university consortiums to address critical research issues, with the first focused on data assimilation.

“There is no federal agency that directly funds basic research in data assimilation, yet the need is great,” it states.