At a House Science Committee hearing last week, lawmakers and witnesses pushed back against proposals to try to block rival countries from influencing international standards, and instead advocated for strengthening the industry-led approach the U.S. has traditionally relied on. 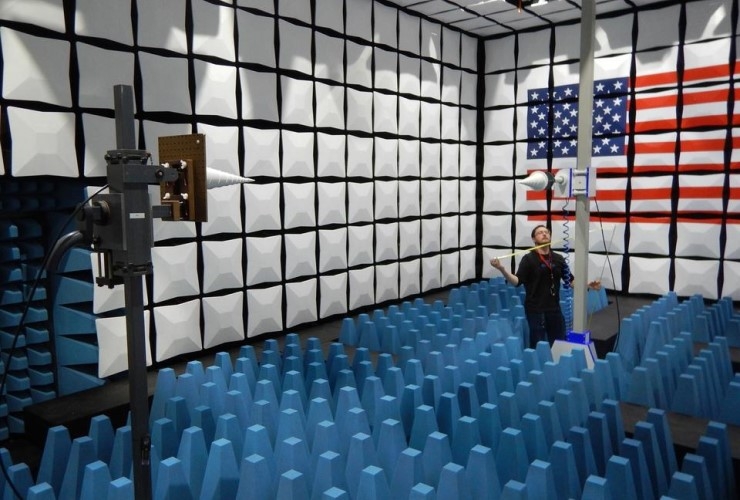 A NIST researcher prepares to run tests in one of the agency's anechoic chambers, which enables the accurate measurements of radiofrequency waves used in wireless communications.

At a hearing on March 17, the House Science Committee considered ways the federal government can strengthen the U.S. position in international standards-setting while preserving the traditional U.S. practice of letting industry stakeholders lead the negotiations.

In recent years, some federal policymakers and lawmakers have grown wary of efforts, particularly by China and the European Union, to exert a strategic influence over international technical standards. That concern has led to federal actions and legislative proposals that aim to exert greater U.S. control over standards-setting processes. However, last week’s hearing showcased dissenting views from committee members and industry leaders, who asserted such efforts may ultimately degrade U.S. influence. They instead defended existing practices and advocated for bolstering the National Institute of Standards and Technology, the federal agency that supports and monitors U.S. participation in international standards organizations.

Opening the hearing, Research and Technology Subcommittee Chair Haley Stevens (D-MI) distinguished between fair and unfair influence in standards-setting, saying, “Within the last year, both the European Union and the Chinese government laid out ambitious plans to gain supremacy in international standards-setting. These goals are legitimate as long as those nations continue to adhere to the merit-based model for standards development. We also have seen reports of nations attempting underhanded tactics like coordinated voting to pass suboptimal standards that favor their domestic industries.”

Stevens warned against implementing “heavy-handed government policies” as a response to other countries’ tactics — a view echoed by Subcommittee Ranking Member Randy Feenstra (R-IA), who explained, “Unlike most countries that have a top-down, government-led approach, the United States has a bottom-up, industry-led approach to standards-setting. We employ a voluntary system in which both standards development and implementation are driven by stakeholder needs. This market-driven approach enables competition, ensures transparency, and takes advantage of building consensus to drive us to the best possible outcomes.”

Witnesses at the hearing pointed to perceptions and policy developments they saw as threatening the benefits gained from the current U.S. approach.

Seeking to temper concerns about China’s growing influence, Saunders remarked, “While China has increased its participation in the International Organization for Standardization and the International Electrotechnical Commission, we do not see that as threatening to U.S. influence or contributing to dominance in those venues to date. In fact, ANSI and its members have encouraged China's participation in rules-based international organizations in lieu of developing their own standards that may not reflect the consensus of the global community.”

Cooper argued that attempts to block other countries’ participation in standards activities would be counterproductive, saying, “I have witnessed these consequences firsthand as a standards leader and participant. For example, the industry has experienced these effects as a result of actions taken in recent years by the Department of Commerce's Bureau of Industry and Security to extend U.S. export-control restrictions to standards-development activities.”

Updegrove cited the bureau’s addition of Chinese telecommunications company Huawei to its Entity List as a specific example of a move intended to protect U.S. interests that in fact damaged them. He explained, “For current purposes, the takeaway is that adding Huawei to the Entity List without a workable exemption caused great disruption to hundreds of standards-setting organizations (SSOs) as they scrambled with frustration to understand what was required of them, and then restructure. Worse, some SSOs claimed that they comply with Entity List rules but American companies disagreed. The result was a policy paradox: Huawei was free to participate in those SSOs, while U.S. companies decided they could not.”

Later in the hearing, Updegrove also pointed to the decision of the RISC-V Foundation, a major chip-design standards organization, to leave the U.S. in 2019 after Huawei was placed on the Entity List. “Their stated reason was because their foreign members did not feel comfortable participating in an organization based in the United States,” he said, calling it a “troubling precedent.”

In addition to highlighting past policy moves, committee members and witnesses called attention to pending legislative proposals they regard as ill-conceived.

Updegrove, for instance, criticized proposals that would seek to require SSOs to demonstrate their commitment to democratic values, arguing, “However well-intentioned, and they are, such laws if enacted would represent an existential threat to global standards development. If the U.S. can impose its own national mandates on SSOs, why not the European Union, or China, or the Russian Federation?”

Stevens spotlighted two separate provisions in the Senate’s U.S. Innovation and Competition Act that would respectively give the State Department and the Commerce Department’s National Telecommunications and Information Administration oversight of U.S. participation in international telecommunications standards organizations. She suggested the provisions would erode NIST’s existing role and advocated for a provision in the House’s counterpart America COMPETES Act of 2022 that would reinforce NIST’s authority.

Olthoff, Saunders, and Cooper all attested to the strength of current coordination between NIST, NTIA, and the State Department. Updegrove further underscored the value of NIST’s familiarity with the standards process itself. “The global standards infrastructure is sort of an alternative government system and, like most government systems, there's a lot of ins and outs, there's a lot of delicacy and nuance, and NIST has decades of experience in navigating that landscape. It's not an easy expertise to pick up,” he said.

The hearing’s participants broadly agreed that strengthening NIST would be one of the best ways to improve the U.S. position in international standards-setting.

Both Stevens and Feenstra advocated for increasing NIST’s budget to strengthen its technical support to industry in emerging technology areas, as proposed in the committee’s bipartisan NIST for the Future Act, which was incorporated into the COMPETES Act. Among its policy provisions, the bill would create a five-year pilot grant program to assist small businesses and academia in participating in international standards organizations.

Some committee members focused on the respective roles of government, industry, and academia in standards-setting at different stages of a technology’s maturity.

Asked by Feenstra about setting standards in emerging areas such as quantum technology and artificial intelligence, Saunders said, “I think an important contributor — and NIST is very active in this area — is something called pre-standardization research. … It has to do with doing underpinning measurement and related research to provide support for robust technical standards. That's important and the federal government can play a role here in filling gaps in early-stage technologies.”

Asked by Rep. Jim Baird (R-IN) about the benefits of developing a national strategy for standards, Cooper suggested that the federal government should develop a high-level strategy that would guide standards-related R&D while preserving industry’s discretion in choosing standards-development strategies for particular technologies.

“I think now is an important moment for the U.S. to assert its own strategy, in particular because it can be valuable as a contrast to what the European Union has proposed. They're really looking at taking much more of a government-directed approach that diminishes the role of industry. I think it would be useful for the U.S. to have a strategy that can … try to convince our allies to follow our approach,” she said.

Saunders observed that ANSI has already developed a standards strategy that was last updated about a year ago, outlining guiding principles for how the U.S. develops standards and participates in international processes. However, she said there is a role for a complementary federal strategy.

“Certainly a clear statement from the government regarding the government's interest in critical and emerging technologies and support for the robust private-sector system, and the underpinning rules that provide the basis for that system, would be valuable in the context of the other strategies that we've seen emerging globally,” she remarked.