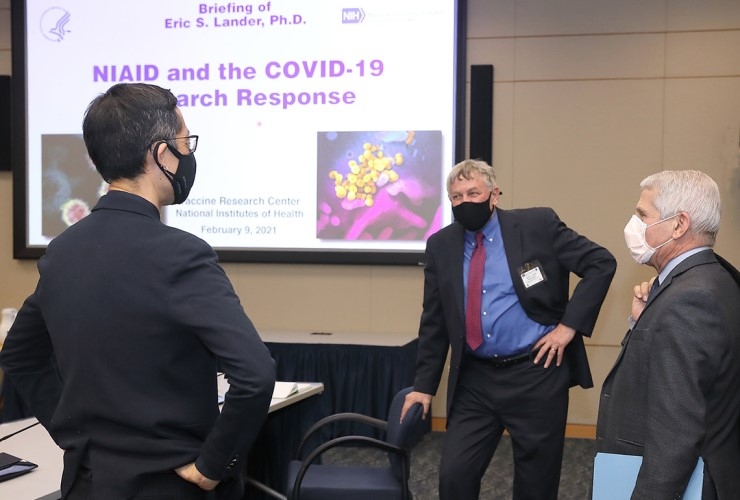 OSTP Director Eric Lander, center, during a visit to the National Institutes of Health in February 2021.

The Biden administration released its first R&D priorities memorandum on Aug. 27, providing guidance to federal agencies as they draft their budget requests for fiscal year 2023. The last several administrations have released such memoranda annually, detailing how R&D programs are expected to mesh with the president’s larger policy agenda.

The new memo identifies administration-wide goals such as improving preparedness for pandemics and other major risks, better characterizing and mitigating the impacts of climate change, and using R&D programs to promote social equity. It reinforces the administration’s goal of bolstering supply-chain security and domestic manufacturing, and carries forward certain Trump administration priorities, such as promoting “critical and emerging” technologies.

As is usual, the memo is signed by the heads of the White House Office of Science and Technology Policy and Office of Management and Budget. The president’s fiscal year 2023 budget request is due for release in February and OMB will be communicating with agencies about its contents over the coming months.

Observing that more than 600,000 Americans have died to date from the COVID-19 pandemic, the memo directs agencies to “build upon previous R&D investments in early-warning systems, diagnostics, therapies, and vaccine development and manufacturing to prevent and respond to pandemic and other biological threats, both domestically and globally.”

More broadly, the memo directs agencies to prioritize efforts that reduce “catastrophic biological, nuclear, and cyber risks” and that enhance “strategic stability.” For example, it states that federal spending should support technology development in the areas of biosecurity, nuclear nonproliferation, arms control treaty verification, and “measures that lower the risk of nuclear accidents and miscalculation.” It also calls for developing new capabilities such as “zero-trust architectures” for “defending critical infrastructure and sensitive networks against cyberattacks and supply-chain attacks.”

To increase “economic resilience,” the memo directs agencies to support technologies that enable “reliable access to critical products, materials and minerals, including new manufacturing and biomanufacturing processes that can cost-effectively produce key goods on demand.” On the links between R&D and domestic manufacturing, it states,

Federally funded R&D can be an important pillar of rebuilding U.S.-based supply chains, seeding the market with cutting-edge new technologies and providing a comparative advantage for our companies and workers. For decades, though, many new products have been invented and innovated in the United States, but ultimately manufactured at scale elsewhere. The Biden-Harris administration is committed to ensuring that the practice of ‘invent it here; make it there’ is replaced with ‘invent it here; make it here.’

The Department of Energy has already moved to require its funding recipients to “substantially manufacture” resulting inventions in the U.S., though the policy has faced criticism that it could impose burdens that would hamper product commercialization.

The memo includes extensive direction on R&D efforts agencies should pursue to support the administration’s climate change mitigation goals, which center around the U.S. achieving net-zero emissions by 2050.

It directs agencies to support all stages of clean energy technology development, from research through deployment, including by procuring “promising innovative climate technologies exiting the federal R&D pipeline to increase their marketability.” It also lists specific technologies of interest, including energy storage and other grid-resilience technologies, carbon management technologies, clean hydrogen, advanced nuclear power, rare earth element separations, floating offshore wind, and sustainable biofuels and bioproducts. In addition, it highlights the role of “nature-based” approaches to addressing climate change, such as terrestrial and coastal carbon sequestration.

For climate research, the memo directs agencies to advance understanding of the economic and societal impacts of climate change, develop carbon inventories and baselines through expanded observational networks, and improve modeling of local and regional climate and extreme weather. It also highlights “disaster attribution science” as a priority, including efforts to identify “potential tipping points in physical, natural, and human systems.”

Agencies are further instructed to use humanities and social science research and direct public engagement to ensure energy innovation and climate adaptation efforts incorporate the views of affected communities, emphasizing the advancement of economic and environmental justice, inclusivity, and equity. They are also instructed to prioritize “efforts to connect science and decision-making through meaningful engagement with climate information users, including through the application of user-friendly climate tools and services, as well as science-based risk communication and citizen and community science programs.”

The memo emphasizes that equity should be a focus throughout the federal R&D enterprise. Under the heading of “innovation for equity,” it directs agencies to “prioritize R&D investments in programs with strong potential to advance equity for all, including people of color and others who have been historically disadvantaged, marginalized, and adversely affected by persistent poverty and inequality.”

As an example, the memo states that “open science and other participatory modes of research” can help such communities participate in the scientific enterprise. It also maintains that open-science practices can help build public trust in science.

Speaking about the administration’s approach to improving trust in government and science at a meeting this week, OSTP Deputy Director for Science and Society Alondra Nelson said the Biden administration aims to “show our work and to be transparent” so as to ensure “that the public can always see where the data comes from and draw their own conclusions.”

To broaden participation in the STEM workforce, the memo discusses a new “Models of Equitable STEM Excellence” initiative that will highlight effective diversity, equity, and inclusion practices that work at scale. It also places an emphasis on supporting research and workforce development activities at Historically Black Colleges and Universities and other Minority Serving Institutions.

OSTP is currently collecting community input on diversity, equity, and inclusion in a series of roundtables titled “The Time is Now.” Speaking about the roundtables at this week’s event, Nelson remarked, “We're identifying barriers facing people in the STEM fields who have disabilities, who are immigrants, people without generational wealth, and others who began the race to a career far behind the starting line. … These discussions have laid bare a vast architecture of discrimination, an edifice of inequality that has grown steeper and more overwhelming over the course of the COVID-19 pandemic.”