The Department of Energy is working to spur clean energy technology development through its "Energy Earthshots" initiatives, leveraging both its basic and applied science programs and the billions of dollars Congress has provided for demonstration projects. 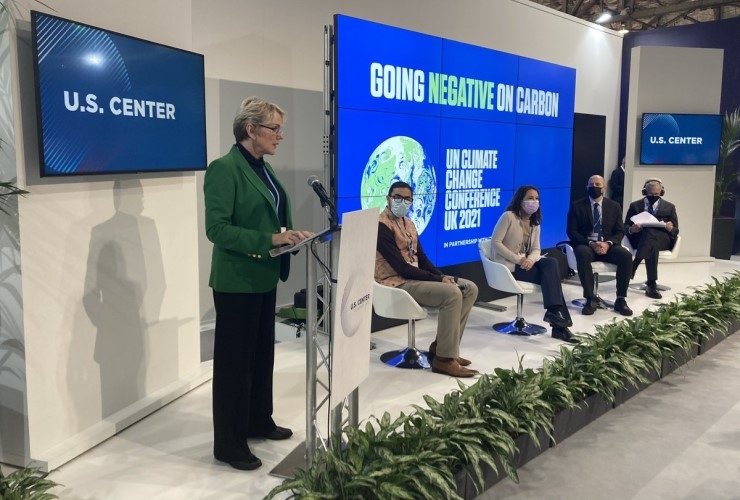 Energy Secretary Jennifer Granholm announced the third in the series of Earthshots, the Carbon Negative Shot, during a panel session at the COP26 climate conference on Nov. 5.

The Department of Energy is preparing to make a major push on energy technology to help put the U.S. on a path to net-zero carbon emissions by 2050, including by spending the tens of billions of dollars that it is receiving through the Infrastructure Investment and Jobs Act. Those funds include about $25 billion for technology demonstrations in capturing carbon dioxide from both point sources and the atmosphere, “clean” hydrogen fuel production, nuclear energy, energy storage, and grid resilience, among other areas.

On a smaller scale, DOE is working to more closely link these initiatives with its basic science research programs. To provide unified oversight, it has reestablished the role of under secretary for science and energy that existed during President Obama’s second term, and it has assembled a series of “science and energy technology teams” to further strengthen coordination.

To help focus its efforts, DOE is also initiating a series of “Energy Earthshots” that set ambitious, 10-year price and capability goals for clean energy technologies, following in the footsteps of the SunShot Initiative the Obama administration launched in 2011. Since last summer, the department has announced three Earthshots, respectively focused on hydrogen, energy storage, and removal of atmospheric carbon dioxide, and by later next year it expects to have announced between 6 and 8 altogether. DOE officials elaborated on these efforts at a meeting this week of its Basic Energy Sciences Advisory Committee (BESAC).

Given the anticipated difficulty of completely decarbonizing certain sectors such as agriculture and shipping, the Carbon Negative Shot focuses on developing economically viable means of directly capturing carbon dioxide from the atmosphere. The aim is to reduce the cost of removing and durably storing carbon dioxide to less than $100 per metric ton of carbon dioxide equivalent, a goal that also allows for the removal of other greenhouse gases. Such efforts could involve sequestration in natural reservoirs or utilization in value-added products such as concrete. The objective is to ultimately remove carbon dioxide from the atmosphere at the gigaton scale, which DOE notes is on the same order as the annual emissions of the U.S. light-duty vehicle fleet.

While DOE is currently spending about $100 million per year across all offices on carbon dioxide removal R&D, the infrastructure act is providing $3.5 billion over several years to establish regional direct air capture “hubs” as well as $115 million for prizes for direct air capture technology. As it prepares to implement the law, this week DOE issued a request for information from “industry, investors, developers, academia, research laboratories, government agencies, nongovernment organizations, and potentially affected communities” on relevant technologies that are “ready to be demonstrated.”

Speaking at the BESAC meeting, DOE Deputy Assistant Secretary for Carbon Management Emily Grubert reflected that the infrastructure bill is explicitly targeted at “more mature technologies.” She added, “And so we’re really looking hard at where else we can get some of the earlier-stage work and make sure that we’re not dropping anything just because we do have these very specific requirements.”

She said the larger-scale projects will offer a firmer sense of what kinds of R&D will be most useful for the department to support, pointing to areas such as materials, sensors, and the verification of biologically based approaches. “In some cases it’s actually relatively easy to do the capturing, such as with uptake by a tree or something like that, but proving that it’s actually durable and keeps the [carbon dioxide] out of the atmosphere permanently requires some basic science and a lot of analytical work,” she explained.

“We're really focused on pathway inclusivity here, so anything that can actually meet our performance-based targets is in scope, which means biological approaches, technological approaches, and so on. But we want to ensure that these are actually real, and that they can be deployed at the most affordable cost possible, in a way that is actually scalable,” she said.

Grubert further stressed that DOE regards itself as helping to build a “brand-new industry,” which involves maintaining a focus on “justice and sustainability.” She remarked, “We want to ensure that carbon dioxide removal is available, not just at the necessary scales and responsive to the climate crisis, but also something that's available to be deployed in a responsible way.”

‘All hands on deck’ for hydrogen goal

DOE’s “Hydrogen Shot” aims to reduce the price of clean hydrogen produced to $1 per kilogram in one decade, which is referred to as the “1-1-1” goal.

DOE is currently spending nearly $300 million per year on hydrogen R&D, and the infrastructure act is providing $9.5 billion over several years to advance clean hydrogen production. Of that amount, $8 billion is for four regional production hubs and the rest for clean hydrogen electrolysis demonstrations and a clean hydrogen manufacturing and recycling program. DOE issued a request for information on potential hydrogen demonstration projects last summer and reviewed the results at a webinar today.

Sunita Satyapal, director of DOE’s Hydrogen and Fuel Cell Technologies Office, told BESAC that in focusing on “clean” hydrogen, the department is “trying to stay away from” categories such as “green” and “blue” hydrogen, which respectively connote production from renewable energy and production from fossil fuels with carbon capture and storage. She said DOE is focused on various pathways, such as electrolysis, waste conversion from fossil fuels with carbon capture and storage, and “advanced pathways” such as photoelectrochemical and thermochemical approaches. “Again, it’s all hands on deck, anything that could meet that cost goal,” she said.

As an illustration of DOE’s funding strategy for hydrogen, Satyapal pointed to the consortia supported through the department’s Energy Materials Network, which combines the efforts of academic and industrial researchers and DOE’s national labs. “With these consortia, we have very often … the same principal investigators. They’re maybe getting Basic Energy Sciences funding and then they’re also getting applied funding.” She said using both sorts of mechanisms allows DOE to impose performance targets where it is appropriate while retaining the flexibility to support more open-ended research in other cases.

Satyapal also pointed to the ongoing [email protected] initiative that DOE launched in 2016, which seeks to develop new applications and infrastructure for hydrogen. She said the initiative exhibits the “versatility of hydrogen and the almost Swiss-Army-knife nature of the fact that we’re looking at all the domestic resources.” 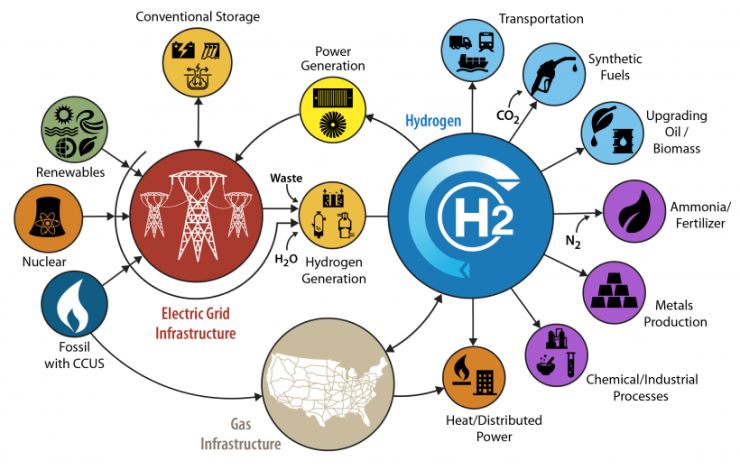 Conceptual diagram of the "Hydrogen at Scale" energy system, adapted from a paper co-authored by Satyapal.

DOE’s “Long-Duration Energy Storage Shot” aims to reduce the cost of grid-scale energy storage by 90% within a decade for systems that can store ten or more hours of energy. The initiative aims to facilitate the storage of intermittent energy sources, such as solar-generated power, and also R&D efforts on next-generation electrochemical, chemical, and thermal energy storage materials.

The infrastructure act is providing $505 million for energy storage demonstration projects, as well as more than $6 billion for activities related to battery material processing, manufacturing, and recycling. Eric Hsieh, the director of grid systems and components in DOE’s Office of Electricity, told BESAC that the additional resources will help in “demonstrating things at scale in a way that we could not have done before.

Hsieh said DOE is currently coordinating R&D efforts according to the Energy Storage Grand Challenge Roadmap it released last year. He explained that the document focuses on “prototypical use cases” that allow DOE to “work backwards to highlight and bring up the kinds of functions that would be needed from the products and the foundational R&D that encompass all of the storage technologies.”

He further noted that the Biden administration has incorporated two particular use cases in its Long-Duration Storage Shot: grid decarbonization and serving remote communities. He said focusing on the latter use case is an “explicit recognition of the need to make sure that all of the benefits reach all electricity consumers.”

Hsieh stressed that DOE also aims to address implementation challenges. He remarked, “While technology development or R&D is really important, we also want to make sure that we are building up the capacity to manufacture these things, to commercialize them, and technology transition, as well as to ensure that there will be a market for these technologies once they’re mature.”