Following on a string of budget increases, funding across the Department of Defense’s Research, Development, Test, and Evaluation (RDT&E) accounts increased 11% in fiscal year 2022 to a new record of $123 billion. That is nearly $50 billion above where those accounts stood just five years earlier. The Biden administration is seeking a 7% increase in fiscal year 2023, which would bring RDT&E spending to $132 billion.

Within RDT&E funding, the budget increased 12% to $18.9 billion for DOD’s early-stage science and technology portfolio, comprising Basic Research, Applied Research, and Advanced Technology Development accounts. The appropriation rebuffed the 13% cut to the portfolio the administration proposed, and it significantly exceeded the amounts proposed by House and Senate appropriators. That outcome stemmed from negotiations between Democrats and Republicans that resulted in the legislation containing a much higher allocation for overall defense spending than Democrats' initial drafts.

For fiscal year 2023, the administration is seeking $16.5 billion across these three accounts, representing a 13% cut. However, Republicans are again insisting on higher defense spending than the administration proposes, which could well result in another spending increase.

Details of Congress’ fiscal year 2022 appropriation can be found in an explanatory statement accompanying the legislation as well as the report from House appropriators. Summary figures are collected in FYI’s Federal Science Budget Tracker. 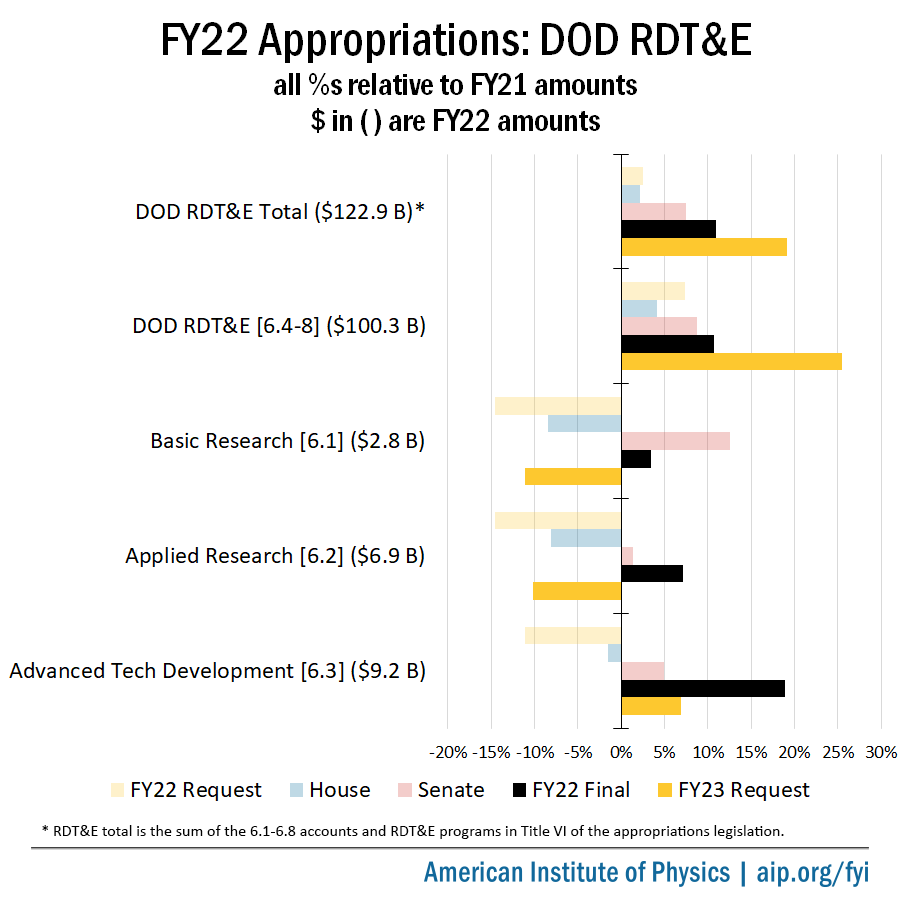 Although Congress revived the practice of earmarking funds for specific projects this year, it included only a small number of earmarks in the DOD RDT&E budget. However, every year Congress also tends to fund certain RDT&E accounts at levels that are significantly higher than requested, often with specific direction for what sorts of activities the additional money should go to. This year, there was considerable budgetary room for such add-ons.

For example, Congress often uses the Army’s Ground Advanced Technology account to fund add-ons broadly related to vehicle R&D. In fiscal year 2021, the account received $211 million despite the administration only requesting $15 million. This year, Congress provided $281 million while the administration requested $23 million. The excess was distributed among 47 topic areas, ranging from 3D-printing of infrastructure to cold weather energy research to organic light-emitting diodes.

University research initiatives. Within Basic Research funding, the appropriation for URI increased from $439 million to $454 million, and Congress directs that $85 million more than requested go to the Defense University Research Instrumentation Program (DURIP), which funds equipment purchases at universities. In November, DOD awarded $46 million in DURIP grants to 144 researchers after receiving 685 proposals requesting a total of $456 million. URI accounts also fund the Multidisciplinary University Research Initiative (MURI) program, which awarded $195 million to 28 research teams in March after receiving 340 proposals. In addition, the accounts fund the National Defense Science and Engineering Graduate fellowships and the Presidential Early Career Awards for Scientists and Engineers programs. The administration requests $332 million for URI in fiscal year 2023.

DEPSCoR. The Defense Established Program to Stimulate Competitive Research awards research grants to institutions in states and territories that have historically received a small share of DOD research funding. DEPSCOR was founded in 1990 but went unfunded from 2010 to 2019, and since then it has been supported as an add-on. In fiscal year 2022, Congress increased its budget from $16 million to $19 million.

Minority-serving institutions. Funding for a Basic Research account that supports initiatives at Historically Black Colleges and Universities and other minority-serving institutions increased from $81 million to $100 million. The account supports research grants and centers as well as educational assistance. The administration requests $33 million for fiscal year 2023, but Congress has consistently provided large add-ons in recent years. A National Academies study completed this spring found that DOD continues to provide proportionally less funding to HBCUs and Minority Institutions than agencies such as NASA and the Department of Energy.

National Defense Education Program. Funding for NDEP increased from $137 million to $145 million. About $90 million is for the SMART scholarship-for-service program, with the remainder going to STEM outreach efforts and smaller targeted educational initiatives. The administration seeks $132 million for NDEP in fiscal year 2023, of which $104 million would be for SMART.

Electronics Resurgence Initiative. Launched by DARPA in 2017, ERI aims to increase collaboration between DOD, the defense industrial base, the commercial electronics industry, and universities in developing new microelectronics technologies that meet DOD requirements. With ERI’s initial five-year phase now complete, Congress provided $80 million in fiscal year 2022 on top of the $331 million requested to ramp up what is called “ERI 2.0,” and the administration requests $709 million for fiscal year 2023.

Microelectronics R&D network. The U.S. Innovation and Competition Act and the America COMPETES Act of 2022, which are currently being reconciled in conference committee, both include $52 billion for initiatives authorized through the CHIPS for America Act. Of that total, $2 billion spread over five years would be for DOD to establish a National Network for Microelectronics R&D, also referred to as a “microelectronics commons.” Its aim would be to “enable the cost-effective exploration of new materials, devices, and architectures, and prototyping in domestic facilities to safeguard domestic intellectual property.”

Advanced telecommunications. Funding for the Next Generation Information Communications Technology account decreased from $428 million to $336 million, and the administration is seeking $250 million for fiscal year 2023. The decrease mainly reflects the completion of funding for a series of testbed facilities and a ramp-down in experimentation with dual-use applications of 5G technology. However, within the overall budget, work is ramping up on R&D related to operating in congested or contested radio spectrum environments. Funding for a separate account that supports R&D on post-5G technology remained steady at about $17 million and the administration is seeking almost $21 million for fiscal year 2023.

Quantum information science. The Senate proposed a $60 million add-on within DARPA’s budget to evaluate the prospect that “utility-scale, fault-tolerant quantum computers” might be built within the next 10 years, and Congress ultimately provided $25 million. The administration requests $11 million in fiscal year 2023 to establish such work within a new research thrust called Underexplored Systems for Utility-Scale Quantum Computing.

Outside DARPA’s budget, Congress provided half of the $29 million requested for a research thrust to support priority QIS projects, including transitioning a next-generation atomic clock DARPA has been developing. DOD requests no further funding for fiscal year 2023. 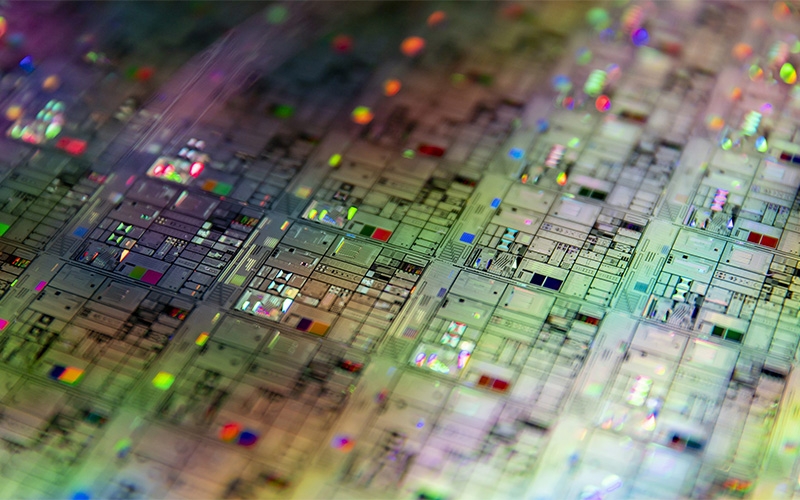 According to DOD, in its first year NSIC funded contracts with nine companies in areas such as hypersonics, quantum information science, and microelectronics, but will only have enough money to fund three or four contracts in its second year. It states, “That level of activity is not sustainable — it is not at a scale that will have meaningful impact and it would be difficult to maintain the interest of the hardware startup and venture capital communities.” The administration seeks $15 million for fiscal year 2023, arguing that level is “critical to building on the momentum and credibility that has been established.”

Defense Innovation Unit. DIU develops contracting relationships with technology companies that have not traditionally worked in the defense sector, and it has offices in several innovation hubs across the country. Its budget declined from $50 million to $34 million in fiscal year 2022 (excluding NSIC’s budget, which is housed within DIU’s), and the administration is seeking $52 million for fiscal year 2023. Within DIU’s current budget, Congress specified that $5 million is for long-duration energy storage technologies and the request specifies $15 million is for a new Defense Advanced Batteries Supply Chain program focused on electric vehicle batteries.

DIU Director Michael Brown recently announced he is stepping down and, in an interview with news outlet Breaking Defense, he expressed frustration over his office’s budget, suggesting DIU is not a priority for DOD. At a recent congressional hearing, Under Secretary of Defense for Research and Engineering Heidi Shyu testified there will be a renewed focus on DIU in the administration’s fiscal year 2024 budget request.

Rapid Defense Experimentation Reserve. Shyu has prioritized the creation of a new fund called RDER (pronounced “raider”) that will funnel resources into technology development “sprints” in areas where DOD faces pressing capability gaps. To establish the program, Congress provided $34 million within the existing Rapid Prototyping Program account, and for fiscal year 2023 the administration is seeking $70 million for RDER within the account. It anticipates requesting similar levels in future years.

Other DOD-wide prototyping initiatives. While Congress stated it supports the RDER concept “in principle,” it also noted DOD already has a number of accounts aimed at providing flexibility needed to develop capabilities quickly. Accordingly, it directed DOD to review them for redundancy and subtracted the funding for RDER from an account called Defense Modernization and Prototyping.

Shyu explained in written testimony to Congress earlier this year that, aside from RDER, DOD supports the Rapid Prototyping Program, the Defense Modernization and Prototyping program, and a Joint Capability Technology Demonstration program. She indicated each responds in complementary ways to technology capability needs that cannot be addressed by a single military service branch. In fiscal year 2022, all the programs except RDER have budgets close to $100 million.

Next Gen OPIR. As an initiative in the rapid acquisition of major systems, DOD and Congress have been expending billions of dollars annually on the Space Force’s Next Generation Overhead Persistent Infrared project, a system of satellites that will succeed the current U.S. satellite-based missile early-warning system. The project’s budget increased from $2.32 billion to $2.34 billion in fiscal year 2022 and the administration requests $3.48 billion for fiscal year 2023, when the rapid acquisition phase of the project is set to end.

Congress noted that the Space Force is “considering alternative architecture plans for a more resilient and more capable missile warning and missile tracking system” and directed the Department of the Air Force, which oversees the Space Force, to promptly notify Congress of any official changes in plans. Chief of Space Operations Gen. Jay Raymond testified to Congress in May that the Space Force is in fact planning to pursue a “hybrid architecture” that integrates Next Gen OPIR with other missile warning, tracking, and defense satellite constellations occupying different orbits.

Directed energy for missile defense. The administration proposed to discontinue a program that is exploring the application of directed energy to missile defense, but Congress ultimately only reduced its budget from $106 million to $39 million, which will principally support continued work on a diode pumped alkali laser demonstration. The administration again seeks no funding for the program in fiscal year 2023.

Armstrong Test Facility. To reactivate a decommissioned wind tunnel at NASA’s Armstrong Test Facility in Ohio, Congress provided a $20 million add-on in each of fiscal years 2020 and 2021 and almost $30 million this year. The facility’s congressional supporters argue it will assist DOD’s development of hypersonic systems, and Congress states the latest round of funding should cover any “expenses necessary for the relocation of affected NASA capabilities or facilities.”

Nuclear space propulsion. Funding for DARPA’s DRACO (Demonstration Rocket for Agile Cislunar Operations) project increased from $33 million to $37 million and the administration seeks $58 million for fiscal year 2023. In parallel with similar efforts at NASA, DRACO involves the development of a nuclear thermal propulsion system, and in May the project solicited proposals for an engine that would be demonstrated in space in fiscal year 2026.

This year, Congress also added $70 million for nuclear propulsion technology into the Space Force budget. It explained that the technology “has the potential to increase the lifespan, range, and communications capabilities of space vehicles enabling the Space Force to develop new space architectures, as well as modified tactics, techniques, and procedures for operation within existing architectures.”

Mobile nuclear power. Funding for DOD’s Project Pele, which seeks to demonstrate a mobile nuclear reactor, increased from $70 million to $117 million, almost twice the administration’s request. Now, the administration seeks $130 million for fiscal year 2023. This month, DOD awarded BWXT Technologies a contract worth about $300 million to build a prototype reactor, which it aims to begin testing at the Department of Energy’s Idaho National Lab in fiscal year 2024.

High-performance computing. The budget for the High Performance Computing Modernization Program, which serves the supercomputing needs of DOD scientists and engineers, is increasing from $221 million to $229 million. That is $40 million more than requested, but the administration is prioritizing the program in fiscal year 2023, seeking $252 million for it.