Department of Energy Under Secretary for Science and Innovation Geri Richmond recently testified about the department’s organizational efforts to increase interchange between basic research, applied R&D, and deployment initiatives. Meanwhile, a number of senior R&D leadership roles at the department remain unfilled. 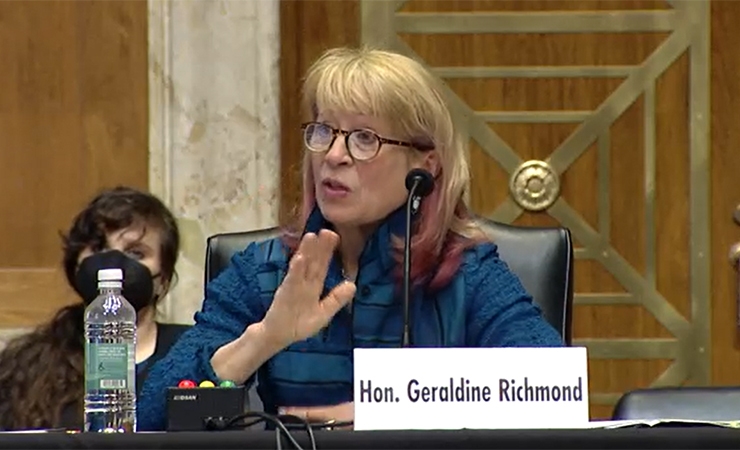 Under Secretary for Science and Innovation Geri Richmond testifies at a Senate hearing on March 1.

Appearing before the Senate Energy and Natural Resources Committee this week, Department of Energy senior official Geri Richmond discussed ongoing changes the department is making to improve the coordination of work on energy technology, from basic research to commercial deployment. The changes are intended to help DOE handle the more than $60 billion it will receive under the Infrastructure Investment and Jobs Act, which is spurring the department to hire about 1,000 new employees.

President Biden has not yet nominated anyone for the under secretary for infrastructure job, and Richmond is the only presidential appointee with responsibility over DOE R&D programs to have been confirmed by the Senate. More than a year into the Biden administration, some of those positions do not yet have nominees, while nominees who have been named are still making their way through a congested Senate confirmation process.

At the start of this week’s hearing, Committee Chair Joe Manchin (D-WV) asked Richmond how DOE is working to facilitate the translation of research across the “valley of death” into practical applications. In reply, Richmond said she has been continually engaged with such efforts since her confirmation in November.

“The Department of Energy leadership is working together to more closely align those program officers and leaders in the Office of Science with the applied areas, with weekly meetings together, bringing together ways in which they can coordinate across programs in ways that it's never been done before,” she explained.

I've been meeting with all of the national laboratory directors individually and also in groups to talk about how they can make this gap shortened to eventually disappear. They are all on board. I've also been meeting with small groups of the research officers from each of the national laboratories, because they're the ones that really have the tendrils down into their laboratories to understand what's going on. And they are right on board with this too.

Asked by Sen. Martin Heinrich (D-NM) about the reorganization of her position, Richmond pointed out that the senior-most official in the new under secretary for infrastructure’s office, Kathleen Hogan, had previously been the temporary fill-in for her under-secretary role prior to her confirmation. She noted that Hogan has experience as a career official in DOE’s applied energy programs and that they now consider themselves to be “connected at the hip,” often sitting in on staff briefings in each other’s offices.

Richmond went on, “We work together to make sure that the transition from the very fundamental work is being passed all the way through. That said, you can't just pass the knowledge and expect it to be launched into the deployment area without some problems, because you discover problems that then have to come all the way back. If we don't keep this string of information flow going back and forth, it's not going to work.”

She further explained that DOE’s new Earthshots initiatives span programs ranging from applied R&D to deployment efforts, that many staff now working in deployment were formerly part of the applied programs, and that the national labs are increasing their work in deployment.

By statute, DOE has three under-secretary positions, all subject to Senate confirmation, and one of which is also the head of the National Nuclear Security Administration. The department has leeway to configure the other ﻿two more-or-less as it sees fit. At the beginning of the Biden administration, DOE assigned a single under secretary joint authority over the Office of Science and the applied energy programs, restoring a configuration that existed during President Obama’s second term but was reversed under President Trump.

However, the new infrastructure law prompted further reform by providing DOE with over $20 billion that will vastly expand its support for technology demonstration projects, most of which will be managed through the new Office of Clean Energy Demonstrations. In addition to overseeing that office, the under secretary for infrastructure will also oversee the Loan Programs Office, the Office of Indian Energy, and the Federal Emergency Management Program, as well as the Office of Cybersecurity, Energy Security, and Emergency Response (CESER), which was previously grouped with the applied energy offices.

DOE is also launching three new offices focused on clean energy infrastructure deployment that will likewise report to the third under secretary. The Grid Infrastructure Office will manage the recently announced Building a Better Grid initiative. The State and Community Energy Program will work with states and local communities to deploy decarbonization technologies. The Office of Manufacturing and Energy Supply Chains will focus on strengthening domestic supply chains for the energy industrial base in accord with a strategy DOE released last month.

Discussing the timing of the reorganization with E&E News last month, Hogan said the idea was to implement the changes before DOE undertakes its expected hiring spree. “The issues with reorgs that are hard on people is when you’re sort of pulling teams apart, so we’ve really sought to minimize those types of changes,” she said, and added, “Part of our thinking was, let’s build what’s right. Let’s not bring a bunch of people in and then realign them later.” 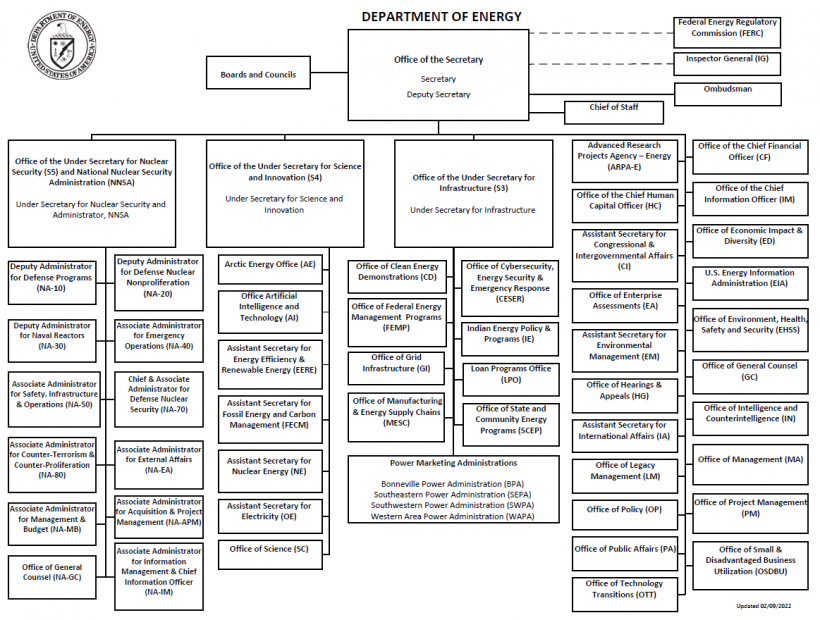 As DOE gears up to implement the Biden administration’s clean energy agenda and the new infrastructure law, it is contending with large numbers of vacancies for key R&D and technology deployment positions. These roles are currently temporarily filled by career officials such as Hogan, or by political appointees whose roles do not require Senate confirmation.

Soil scientist Asmeret Asefaw Berhe ha﻿s been waiting for Senate confirmation as director of the Office of Science since last April. Carbon capture policy expert Brad Crabtree and Massachusetts state representative Maria Robinson have been waiting since September for the confirmation of their respective nominations to lead the Office of Fossil Energy and Carbon Management and the ﻿Office of Electricity.

Biden more recently announced the nomination of nuclear engineer Katy Huff to lead the Office of Nuclear Energy. Huff was previously the acting head of the office as its senior-most appointee.

Despite the prevalence of energy innovation in Biden’s agenda, he has not named nominees to lead either the Office of Energy Efficiency and Renewable Energy or the Advanced Research Projects Agency–Energy. The current head of the Office of Clean Energy Demonstrations is also an acting official, though the position is not a presidential appointment and does not require Senate confirmation.

Energy and Natural Resources Committee Ranking Member John Barrasso (R-WY) has argued that because of the importance of grid cybersecurity, CESER should have a Senate-confirmed leader and pressed Richmond on the point at this week’s hearing.

Richmond responded that DOE leadership is concerned that requiring Senate confirmation could introduce delays and impede the department’s ability to ensure someone qualified is in the position at all times. “We believe that Puesh Kumar, who's in that position right now, is excellent in that area,” she said.

She continued, “We know that you need to be able to question whether you think the person is doing the job and able to do that job, and we believe that you have mechanisms to be able to do that without having [that person] be confirmed. So, our choice would be not to have that [be a] confirmed position. But it's more about the fact of having somebody in place that's qualified, that's continuous and not political.”