At a recent House Science Committee hearing, fusion experts highlighted recent breakthroughs in the field and urged the U.S. to embark on a path to build a pilot fusion power plant in the coming decades. 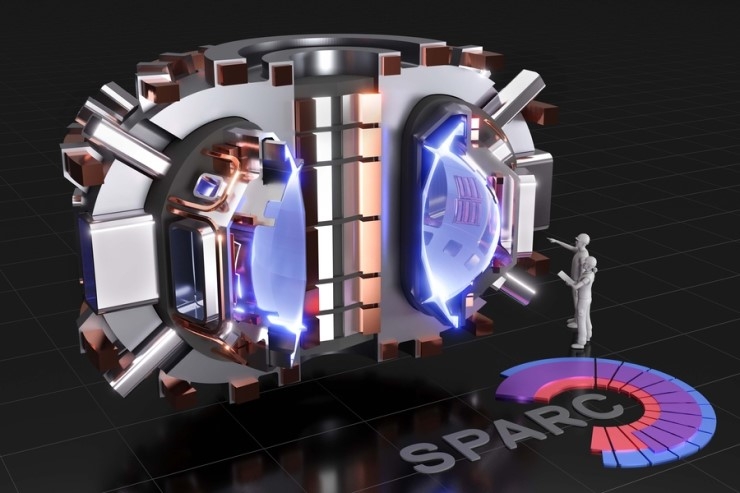 Commonwealth Fusion Systems and MIT’s planned SPARC tokamak, a compact fusion demonstration device intended as a precursor to a fusion pilot plant it hopes to construct by the early 2030s.

The House Science Committee recently held a hearing to make the case for rapidly expanding the Department of Energy’s fusion research and technology programs. Witnesses from across fusion research efforts argued the U.S. is failing to keep pace with other countries’ support for the field and that fusion technology should play an important role in the government’s decarbonization agenda.

Leading the hearing, Energy Subcommittee Chair Jamaal Bowman (D-NY) asserted that fusion energy has reached a pivotal moment, pointing to recent breakthroughs and the completion of a long-range plan that conveys priorities to DOE on behalf of the fusion community. That plan recommends the U.S aim to build a pilot fusion power plant by the 2040s, and some private fusion companies claim the milestone can be achieved in the 2030s.

“Challenges remain on the path toward realizing this transformative goal. But we now have new reasons for hope, as well as comprehensive roadmaps driven by the research community to guide us on this path,” Bowman said.

“Now is the time to move aggressively toward the development and deployment of fusion energy,” Carter said in his opening statement, stressing the long-range plan’s recommendations that DOE refocus its fusion science program from research to technology development and recalibrate its relations with the private sector. “We need to look for other mechanisms to do private–public partnership, and that needs to be developed quickly,” he added later.

Mumgaard highlighted that fusion companies have raised around $2.4 billion in private capital to date worldwide, and that a recent Fusion Industry Association survey of 23 companies indicated a majority believe the first grid-capable fusion plant will be ready by the 2030s. He also pointed to the increasing scale of support from other countries and suggested they could overtake the U.S.

“The U.K., Germany, Japan, Italy are building facilities first conceived by the U.S. China is rapidly investing. The U.K. has a government-wide goal to be first and is already siting their first plant,” he said, referring to the country's Spherical Tokamak for Energy Production project. In addition, he warned that other countries may attract private fusion projects that could be built in the U.S., pointing to the Canadian company General Fusion's recent decision to site a demonstration project in the U.K.

Cowley, who led the U.K. Atomic Energy Authority before becoming PPPL director in 2018, said that although DOE has pioneered much of the fusion science used by other countries, its program has “remained divorced from the idea of actually producing an energy source.”

“That was never true in any of the European programs, and certainly not true in the Chinese program,” he added.

Mumgaard’s company, which was spun out from MIT in 2018, aims to build a compact fusion demonstration device called SPARC that can produce a burning plasma, a key milestone in generating energy from fusion. In his written statement, he projected that SPARC will achieve that goal nearly a decade earlier than ITER and at less than a tenth of the cost, and that a follow-on facility called ARC could be ready to connect to the grid in the early 2030s.

As a sign of the company’s progress, he pointed to its recent demonstration of the world’s strongest high-temperature superconducting magnet. However, he also suggested it will require greater support from DOE to be successful, such as through the milestone-based cost sharing program for fusion that Congress has authorized but not yet funded.

The Science Committee has been a driving force behind legislation to expand DOE’s fusion program, including by adding the milestone-based program and other fusion-related provisions to the Energy Act of 2020. It also proposed $2.6 billion in funding for those efforts in the Democrats’ Build Back Better Act, $985 million of which survived subsequent cuts to the bill’s topline. By contrast, the Biden administration, which has sought billions of dollars to advance other energy technologies, did not propose a ramp-up for fusion in either its annual budget request or through special spending legislation.

Committee seeks to shore up support for ITER 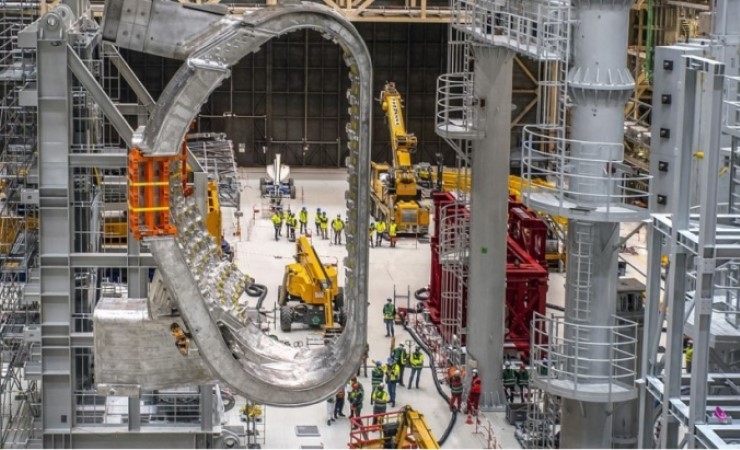 The first sector of ITER’s vacuum vessel was transported to the experiment’s assembly hall in April 2021.

Although attention has recently turned to private ventures, the U.S. is also committed to providing billions of dollars for ITER. DOE instructed the long-range planning committee to assume the U.S. will remain a partner in the project, and the committee’s report describes U.S. participation as “essential” to fusion energy development.

McCarthy elaborated on this point in her testimony, arguing that pursuing multiple approaches to fusion reduces overall risk and that the practical experience gained through ITER will facilitate the development of a U.S.-based pilot plant. “Domestic supply chains are being developed, fabrication challenges are being resolved, and integration issues are being addressed, all to assemble the world’s first nuclear-certified fusion reactor,” she said.

“For about 9% towards construction costs and 13% towards operation costs, the United States receives 100% of ITER science, technology, and associated intellectual property,” she added. She also pointed out in her written testimony that the bulk of DOE funding for ITER has gone to U.S. institutions, which have been awarded $1.3 billion to date.

Energy Subcommittee Ranking Member Randy Weber (R-TX) echoed these points and added, “Upholding our end of this deal is imperative to the success of U.S. fusion energy and to America's standing and credibility as a global scientific collaborator.”

According to the Science Committee, DOE’s most recent estimate for the U.S. share of ITER construction costs is roughly $5 billion, though the department is still assessing pandemic impacts on the project.

The Science Committee has been broadly supportive of ITER. Its DOE Science for the Future Act supports full participation in the project and the committee proposed to provide $1.3 billion for it through the Build Back Better Act, though those funds were stripped out in the legislation’s most recent version. 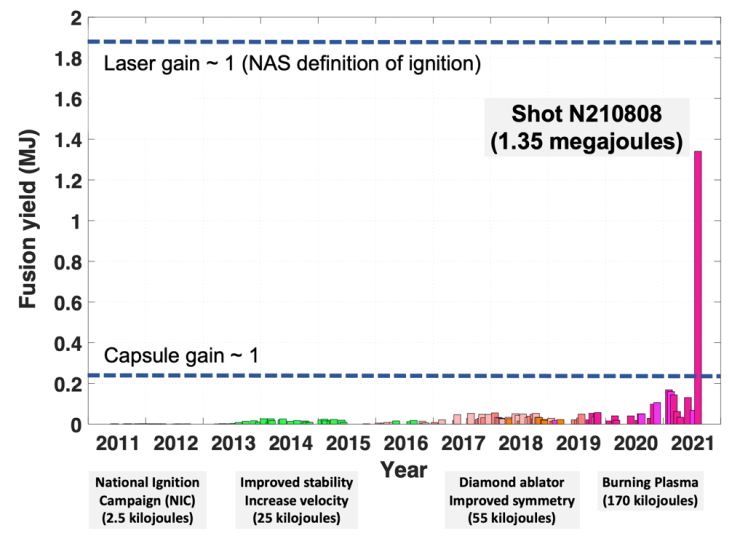 A chart of fusion yields from NIF shots over the past decade. The record-breaking shot from August generated 1.35 megajoules of energy, far exceeding the energy absorbed by the experiment’s inner capsule, but fell short of achieving net energy gain.

The hearing also examined prospects for generating energy from inertial fusion in view of a record-breaking experiment the National Ignition Facility conducted in August.

As part of its ongoing experimental program, which uses an array of ultraviolet lasers to compress hydrogen fuel capsules, NIF generated 1.3 megajoules of energy — roughly five times the 250 kilojoules absorbed by the capsule and 70% of the energy used by the lasers. NIF scientist Tammy Ma said the facility has not yet replicated the shot and is working to understand the physics parameters that affected its performance.

“Those repeat shots — the yields were a little bit lower and that is because there were some more imperfections in the target. The laser delivery was not quite as good,” she said.

The Energy Act directed the DOE to establish an inertial fusion research program for energy applications, but the department has not yet implemented that guidance. Ma noted that DOE is planning to hold a Basic Research Needs Workshop next year to identify priority research directions for inertial fusion energy.

Rep. Zoe Lofgren (D-CA), a longtime inertial fusion advocate whose district neighbors Livermore Lab, noted there have been tensions between NNSA’s prioritization of its stockpile mission and its support for science activities. “There was a time when NNSA wanted to shut down all of the science projects a few decades ago. Congress rallied around in a day to put a stop to that. So, I'm sure that we will have a bipartisan effort to make sure that the science gets done,” she said.