Senate appropriators have proposed significant increases for defense R&D programs for fiscal year 2022, including a 12% boost to the Defense Advanced Research Projects Agency, while House appropriators propose a topline cut for the early-stage research budget.

Appropriators have split ways in their proposals for funding the Department of Defense’s Science and Technology portfolio in fiscal year 2022, with the House proposing a 5% cut to the current $16.9 billion topline and the Senate a 5% increase. The Senate proposes a particularly large boost for the Defense Advanced Research Projects Agency, seeking a 12% increase to just under $4 billion, while the House proposes flat funding for the agency.

The S&T portfolio comprises accounts within DOD’s Research, Development, Test, and Evaluation (RDT&E) budget that fund basic research, applied research, and advanced technology development. Over the past five years, Congress has increased annual funding for the S&T portfolio by 30% while increasing RDT&E as a whole by about 50% to $111 billion. This year, the House and Senate are respectively proposing a 2% and a 7% increase for RDT&E.

The final amounts could end up higher than those proposed, because Democrats have yet to reach agreement on overall federal spending levels with Republicans, who can filibuster appropriations and have argued Democrats have not allocated enough for defense. The appropriations bills are accompanied by explanatory reports from the House and Senate Appropriations Committees that contain policy direction for selected programs. Highlights from the reports are summarized below, and detailed figures are available in FYI's Federal Science Budget Tracker. 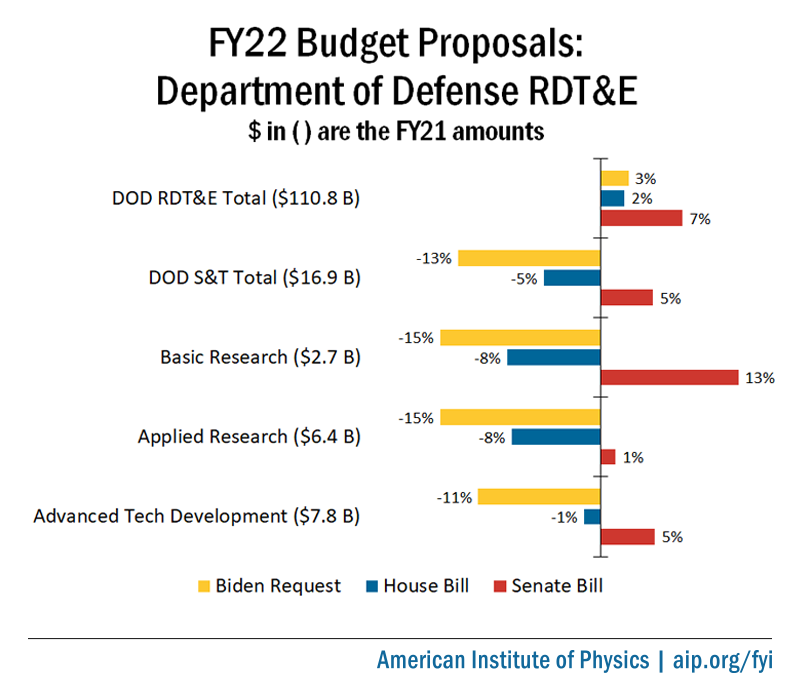 The split over S&T funding is particularly pronounced for basic research, with the Senate proposing a 13% increase to $3 billion and the House a 9% cut, distributed across the military service branches and defense agencies.

National Defense Education Program. DOD supports a variety of STEM education and outreach activities through the National Defense Education Program, including the SMART scholarships-for-service. DOD requested to increase funding for SMART scholarships from $77 million to $89 million to raise the annual number of awards from about 300 to 400, while seeking an overall NDEP budget of $112 million, $25 million less than its current level. The House proposes $116 million for NDEP, with $2 million of the increase over the request allocated to SMART scholarships, while the Senate proposes $147 million for the program, specifying $20 million above the request go to STEM activities generally.

Minority Serving Institutions. The House proposes to increase funding for a program that supports research and education activities at Historically Black Colleges and Universities and other Minority Serving Institutions from $81 million to $85 million. Congress has funded the program well above the requested levels in recent years, and DOD used a portion of the funds to create new research centers focused on aerospace engineering, artificial intelligence, quantum sensing, advanced communications, biotechnology, and materials science. The Senate proposes to fund the program at $41 million, $10 million above the request, which would roll it back to near the amount it received in fiscal year 2018.

Defense EPSCoR. In fiscal year 2019, Congress revived the Defense Established Program to Stimulate Competitive Research (DEPSCoR), which from 1991 to 2010 supported projects in states that have historically received a low share of DOD research funding. Although DOD has requested no funds for the program, Congress provided it with $17 million last year and the Senate would increase its budget to $19 million, while the House proposes $5 million.

Microelectronics. DOD has prioritized microelectronics R&D in recent years, including through the five-year Electronics Resurgence Initiative that DARPA launched in 2017. Noting DOD requested $331 million for a follow-on effort, referred to as ERI 2.0, the Senate bill proposes providing an additional $80 million within DARPA’s budget to accelerate the initiative. The Senate also proposes to increase two accounts funding Trusted and Assured Microelectronics programs by 39% to a combined level of $853 million, which is more than double the House’s proposed increase and well above the 2% increase requested.

Through the stopgap measure that has been funding the government since October, when fiscal year 2022 began, Congress has already provided $885 million that DOD requested to purchase specialized chips from the company GlobalFoundries before it sells a factory in New York later this year.

Separate from the regular appropriations process, DOD could receive $2 billion for microelectronics R&D over five years through a provision currently attached to the Senate-passed U.S. Innovation and Competition Act. The funding is specifically for DOD to establish the National Network for Microelectronics R&D authorized by the CHIPS for America Act.

Quantum information science. The Senate proposes to provide $60 million above the requested amount within DARPA’s budget for quantum computing, specifically to “evaluate disruptive designs for utility-scale, fault-tolerant quantum computers, with a specific focus on systems that can be constructed in less than 10 years using non-traditional quantum computing approaches.”

The Senate also matches the $29 million requested for a new program that would accelerate work on a next-generation atomic clock and facilitate researcher access to quantum computing capabilities in the private sector, pursuant to a provision in the National Defense Authorization Act for Fiscal Year 2021. The House only proposes partial funding for the program, citing “unjustified growth.”

In addition, the Senate proposes $42 million more than the $169 million requested for the Air Force’s Dominant Information Sciences and Methods program, with $25 million of the increase for “photonic quantum computing” and $17 million for quantum internet and networking activities. The program is currently funded at $216 million, of which Congress directed at least $27 million go to QIS initiatives.

Advanced communications. The recently created Next Generation Information and Communications Technology program supports large-scale prototyping and experimentation with 5G technology. The House matches the request to reduce its overall budget by 15% to $375 million, a cut DOD attributed to the completion of experiment site construction, while the Senate proposes $51 million less than requested, citing inadequate planning for the next phase of the program.

A separate program focused on technologies “beyond 5G” would receive the requested $23 million under the Senate proposal, an increase from $17 million, while the House proposes $11 million, citing “insufficient justification.” DOD is conducting the program in coordination with the National Institute of Standards and Technology and the National Science Foundation, which have recently teamed up through NSF’s Resilient and Intelligent NextG Systems (RINGS) program.

High-performance computing. The Senate proposes to keep the budget for the DOD’s Army-administered High-Performance Computing Modernization Program at $229 million, just above its current level, while the House would meet the administration’s request of $189 million. Last year, Congress directed DOD to review the program to determine if its budget is adequate in view of the increasing demands on the department’s computing capacity from an expanding array of applications.

Missile early warning. The House meets the administration’s nearly $2.5 billion request for the Next-Generation Overhead Persistent Infrared program, while the Senate proposes providing about $2.1 billion. Next-Gen OPIR is a satellite system designed to detect missile launches that is planned as a successor to the current Space-Based Infrared System. DOD has been aggressively funding Next-Gen OPIR with congressional support, and it is considered a test case for efforts to decrease the time it takes to develop and acquire major technological systems.

In their report, Senate appropriators express dissatisfaction that DOD has been shifting funding between components of the program and propose to exert more granular control over its budget. House appropriators state the program’s current cost and schedule estimates are unrealistic and direct DOD to conduct a “thorough review.”

Directed energy for missile defense. The House assents to the administration’s proposal to zero out funding for a program that is developing an airborne directed energy system for missile defense. DOD rejected the program as infeasible under the previous administration, but the Senate proposes to retain $39 million of its current $107 million budget.

Mobile nuclear reactor. DOD is funding efforts to design a transportable nuclear reactor through Project Pele, which in March selected two teams to proceed toward a final design. Both the House and Senate direct DOD to spend $75 million on the project, $15 million more than requested.

National Security Innovation Capital. In fiscal year 2021, Congress provided an initial appropriation of $15 million for National Security Innovation Capital, a program that invests in dual-use hardware startups as a counterweight to venture capital from rival nations. The House and Senate both match DOD’s request for $5 million to continue the program in fiscal year 2022. DOD has stated the program would use the funds to continue supporting startups that have capabilities in “autonomy, communications, power, sensors, and space.”

Budgeting reform. Senate appropriators comment at length on potential reforms to DOD’s Planning, Programming, Budgeting, and Execution (PPBE) process, noting they bear on the department’s ability to transition new technologies into acquisition programs. Both the House and Senate are proposing to establish a commission to review the PPBE framework through their respective versions of the National Defense Authorization Act, Congress’ annual defense policy bill. Senate appropriators propose allocating $2 million for the commission.