Appropriators in the House and Senate both propose to boost funding for the National Institutes of Health by more than 10% in fiscal year 2022. They also endorse the creation of an Advanced Research Projects Agency for Health, though they would provide less than half the initial funding the administration requested for it. 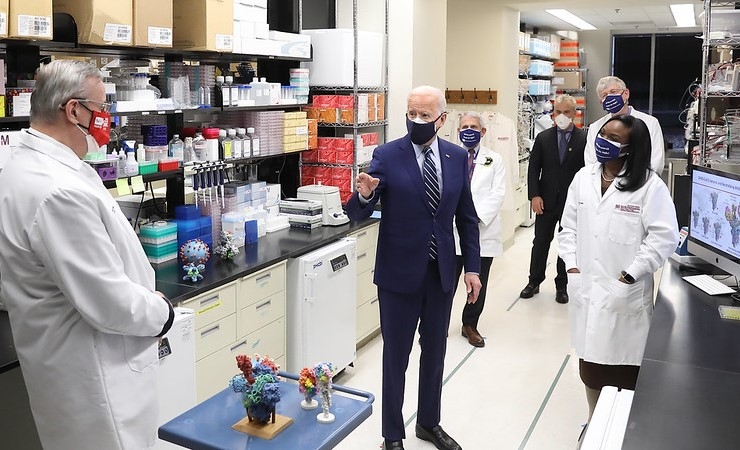 President Joe Biden during a visit to the National Institutes of Health in February.

House and Senate appropriators have both proposed double-digit percentage budget boosts for the National Institutes of Health in their spending legislation for fiscal year 2022. The Senate bill, released last week, proposes to increase NIH’s current $43 billion topline by $5 billion, while the House bill proposes a $6.5 billion increase. Either amount would represent by far the largest increase among the string of multi-billion-dollar boosts Congress has provided NIH in each of the past six years, though they fall short of the $9 billion increase requested by the Biden administration.

Both bills strongly support the administration’s proposal to stand up an Advanced Research Projects Agency for Health (ARPA–H) but allocate less than half the $6.5 billion the administration requested for it. They also stipulate that the funds are contingent on Congress passing legislation that formally authorizes the agency.

Total funding for NIH’s existing activities would increase by 8% under the House proposal and 6% under both the Senate and administration proposals. Reports by the House and Senate Appropriations Committees convey more specific funding direction and policy priorities. Summary-level figures are collected in the FYI Federal Science Budget Tracker. 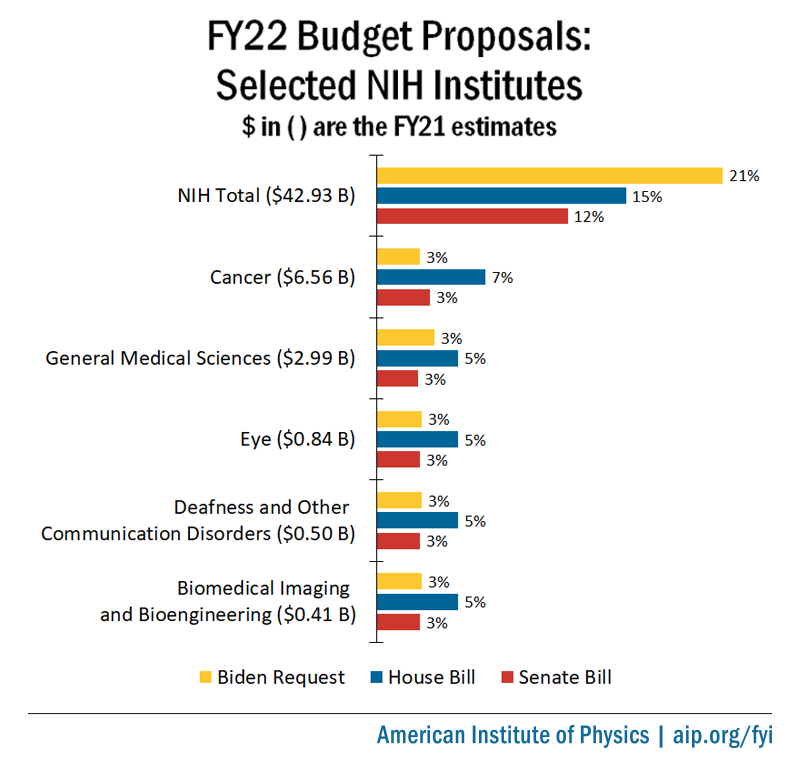 The House bill includes $3 billion for ARPA–H, while the Senate bill allocates $2.4 billion. In both cases, NIH would be permitted to spend the funds until the end of fiscal year 2024, as requested by the administration.

Establishing ARPA–H is a personal priority of President Biden, who highlighted the proposal in his first address to Congress. His administration has stated the agency would draw on the management approach pioneered by the Defense Advanced Research Projects Agency (DARPA), which relies on term-limited program managers to drive forward high-risk, high-reward research.

The administration has proposed to configure ARPA–H as a division within NIH, which itself is located in the Department of Health and Human Services (HHS). However, some advocacy groups have argued that to help the agency develop the right culture, it should be established outside of NIH. Addressing this subject, the Senate report states,

As ARPA–H remains unauthorized and there are differing views on where the new entity should be placed within the department, the committee’s recommendation should not be viewed as favoring its placement within NIH. The committee remains open to making it a free-standing component within NIH or, alternatively, as a separate new agency. …

The real challenge, widely recognized, is how to recreate in ARPA–H the prescient, venture-capital-like culture that exists at DARPA. This will be very difficult to do, as efforts to replicate innovative and successful risk-taking cultures often fail. To that end, if ARPA–H is placed in NIH, the committee believes it should be as an independent entity rather than within the Office of the Director as had been initially suggested. NIH recognizes that ARPA–H will require a very different culture and mission than its other 27 Institutes and Centers. To foster the development of that culture, ARPA–H should be located away from the main NIH campus.

House appropriators also stress the importance of the agency having a distinct culture, but they endorse the approach of creating it as an institute within NIH rather than as a wholly separate entity.

More generally, House and Senate appropriators state they expect ARPA–H to have a diverse cohort of program managers recruited from industry, academia, and other sectors. The Senate report adds that the agency should consider recruiting alumni of DARPA’s Biological Technologies Office and should avoid hiring staff from NIH’s existing workforce.

Development of authorization legislation for ARPA–H is still at an early stage.  Rep. Anna Eshoo (D-CA), who chairs the policy subcommittee for HHS, introduced a bill this month that would create ARPA–H as a standalone agency within HHS, rather than inside NIH. However, the bill currently has no cosponsors and counterpart legislation has not been introduced in the Senate.

Separately, Reps. Fred Upton (R-MI) and Diana DeGette (D-CO) announced they would push to authorize ARPA–H through follow-on to the 21st Century Cures Act of 2016, which they are calling “Cures 2.0.” They released a discussion draft of the bill this summer that includes placeholder language establishing ARPA–H but does not specify where the agency would be located.

Pandemic impacts. Acknowledging the impacts of pandemic-related disruptions to research on young scientists’ career prospects, House and Senate appropriators applaud NIH’s efforts to support early career researchers by allowing award recipients to apply for funded and no-cost extensions. However, they express concern about the “possibility of uneven levels of support between Institutes and Centers, unclear qualifying standards, and demand that may exceed resources,” and encourage NIH to develop a standardized approach across the agency for granting extensions.

Harassment. House and Senate appropriators both state they are “deeply frustrated by NIH’s failure to implement [congressional] direction to address harassment in extramural research settings.” In its fiscal year 2020 appropriations legislation, Congress directed NIH to require that institutions notify the agency when “key personnel” are removed from grants due to harassment concerns, and NIH subsequently issued a policy requiring requests for removing personnel from grants to note whether they are related to concerns about safety or the work environment. Unsatisfied, Congress reiterated its guidance last year, directing the agency to “make clear that grantees must identify any changes to key personnel on an award that are related to concerns about harassment.”

This year, Senate appropriators lament that they were not informed until January 2021 that HHS had “at some point taken the position that requiring grant recipients to report to NIH when their personnel actions relate to harassment would amount to a legislative rule and would need to be imposed through notice-and-comment rulemaking under the Administrative Procedure Act.” Accordingly, both the House and Senate bills include a provision that requires institutions to notify the agency when key personnel are “removed from their position or are otherwise disciplined due to concerns about harassment, bullying, retaliation, or hostile working conditions” and authorizes NIH to issue regulations consistent with that requirement.

Workforce diversity. Both bills would increase funding for NIH’s scientific workforce diversity office from $6 million to $22 million as requested. Among other activities, the office leads the recently-launched UNITE initiative, which seeks to “identify and address structural racism within the NIH community and the greater biomedical research community.” In addition, the House proposes to boost funding for diversity programs within the National Institute of General Medical Sciences by $20 million.

Climate change. Both bills meet the administration’s request for $100 million in new funds for research on the health impacts of climate change, particularly for vulnerable populations, as well as the request for an additional $100 million for the Climate and Health program at the Centers for Disease Control and Prevention. Expanding such research is a top priority in HHS’ Climate Action Plan, and the department recently established an Office of Climate Change and Health Equity.

Data management. The Senate report directs NIH to increase funding for its Office of Data Science Strategy from $30 million to $72 million, exceeding the request by $17 million. Asserting that “investigator access to data stored and managed in NIH-supported repositories continues to be burdensome and inconsistent, despite numerous incremental improvements,” the report instructs the office to work with stakeholders to develop standardized data access processes across the agency. It also stipulates that NIH should consider potential privacy risks associated with the aggregation of disparate data.

Foreign influence. House and Senate appropriators both allocate a $2.5 million increase for NIH’s Office of Extramural Research in support of its ongoing investigations of researchers suspected of maintaining undisclosed ties to foreign institutions. They also direct the agency to provide quarterly updates on the progress of the investigations as well as on the institutions and scientists affected.

Infrastructure modernization. Last year, Congress provided $200 million for NIH’s Buildings and Facilities account and transferred $225 million from a special fund to help address NIH’s maintenance backlog, which exceeds $2 billion. This year, the House proposes to provide a total of $250 million, meeting the administration’s request for the base Building and Facilities account, while the Senate proposes $275 million.

Neither bill includes a provision requested by the administration that would allow NIH to transfer up to 1% of its other appropriations into the Buildings and Facilities account to fund additional projects. The Senate report explains, “This would be highly unusual authority for a federal agency and the administration has provided no explanation for why this mechanism would be appropriate for NIH, but not other federal agencies.” Instead, the Senate proposes to increase the amount of funding appropriated to Institutes and Centers that may be used for repairs and improvements, from $45 million to $100 million, and to raise the per project cap from $3.5 million to $5 million.